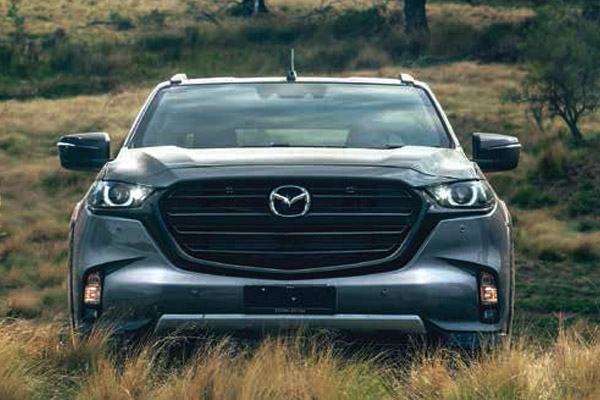 The BT-50, though, is sourced from Thailand for sub-Saharan markets and it comes to the party with a bold new look and a far more modern cabin.

When it comes to pick up manufacturing, very few car brands go at it alone and instead opt for partnerships, and not surprisingly, we’ve seen a switching of allegiances in recent years. The outgoing Mazda BT-50, for instance, was based on the Ford Ranger platform, but since the Mazda-Ford dissolution, the Blue Oval is now building the second-generation Amarok for Volkswagen and the all-new BT-50 that you see here is in fact built by Isuzu and based on the new-generation D-max platform.

The BT-50, though, is sourced from Thailand for sub-Saharan markets and it comes to the party with a bold new look and a far more modern cabin.Fully redesigned for the first time in nine years, the BT-50 is globally supplied by Isuzu on an Original Equipment Manufacturer (OEM) basis.

The previous BT-50’s exterior design drew criticism for its curvy front end and strange looking tail lights. On the positive side, its sporty and powerful design, exceptional driving performance capable of taking on all kinds of driving situations, and functionality have all been highly regarded by drivers who actively drive pickups.

The second fully-redesigned model aims to bring customers pleasure and enjoyment during their time spent inside the vehicle. Since it’s based on Isuzu pickup platform, special care has gone into the vehicle’s design, ease of use and into creating peace of mind for the occupants. It seems to get the balance right by adopting a persona that reminds us of the Japanese carmaker’s latest line of SUVs.

Basically, the all-new BT-50 expresses the unique beauty of Mazda’s Kodo-Soul of Motion design theme with power, toughness and utilitarian functionality suited to a pickup.

The visual attitude is attractive nonetheless and the design team has done a good enough job of distinguishing it from the Isuzu. The vehicle’s driving performance, functionality and safety meet the active needs of the wide range of situations in which customers may use double cab pickups.

Mazda aims to become a brand that can create strong bonds with customers by focusing on the pure essence of cars – the joy of driving – and committing themselves to preserve the beautiful earth, enrich people’s lives and make a bountiful society that lifts everybody’s spirits.

The cockpit, with its stitched leather dash top trim, makes for a classier vibe than you’d expect in a pickup. It really feels like a premium vehicle inside, right down to the piano-key ventilation controls beneath the infotainment system. On that note, the cabin architecture strikes a good balance between analogue and digital.

The aforementioned climate controls look great, and they’re simple enough to use. Mazda hasn’t simply thrown all functionality onto the central screen, although it does have a very decent 9.0-inch infotainment system with eight speakers. The system is simple to use and the graphics are easy on the eye. Navigation is easily solved by connecting to Android Auto or Apple CarPlay.

It’s easy enough to get comfortable behind the wheel of the Mazda BT-50 and unlike rivals such as the Ranger, the steering wheel adjusts for both height and reach. A curious omission in this range-topper is leather seat upholstery.

In terms of spec, the Mazda BT-50 3.0 Individual comes with dual-zone climate control, auto headlights and wipers, front parking sensors, reverse camera and a leather-wrapped multi-function steering wheel. For the record, the cheaper 3.0 Dynamic model has the same cabin spec, but loses the four-wheel drive.

In a combination of highway and dirt road driving, the fuel consumption proved decent enough for a vehicle of this size and stature, averaging around 8.3 litres per 100km mostly on tarmac roads.

Performance is good, with the vehicle delivering relatively effortless performance, with enough power to overtake when needed.

The BT-50 behaves better than expected on dirt roads that form most of African rural roads, coupled with improved road-holding and steering response. Cornering exudes confidence for a pickup of its size and weight, which offers drivers great expectations while behind the cock pit of these work horses.

The road trip also highlighted an impracticality that exists with all pickups on the market, barring a few special edition models.

The BT-50 locks itself as soon as you’ve exited for driver safety, away from the security in the very pleasant interior cabin.

Many including industry heavyweights assume that being a motor journalist means criticising a vehicle and outing its weak points. Much like Jeremy Clarkson and the likes do. Well, that’s partly true, but reporting on a vehicle is a two-way street. Rather than rip it apart, approach it justly and objectively, thus, giving a fair opinion. With the all-new Mazda BT-50, the approach was simple: evaluate the vehicle for what it is and give a fair and objective verdict on it.

With its striking design, classy cabin and decent all-round performance and dynamics, the Mazda BT-50 is a pickup that is likeable and adds to lift the Mazda’s profile with Kenyan pickup buyers. It makes for an interesting and refreshing alternative, and is rightly expected to give the segment leaders a real run for their money.

A visit to the Mazda Division of the CMC Motors Group’s showrooms will let one get up close and personal with the all-new Mazda BT-50. Let’s hope they’re a tad aggressive with their pricing approach to lure customers from Toyota, Ford, Isuzu and Nissan.