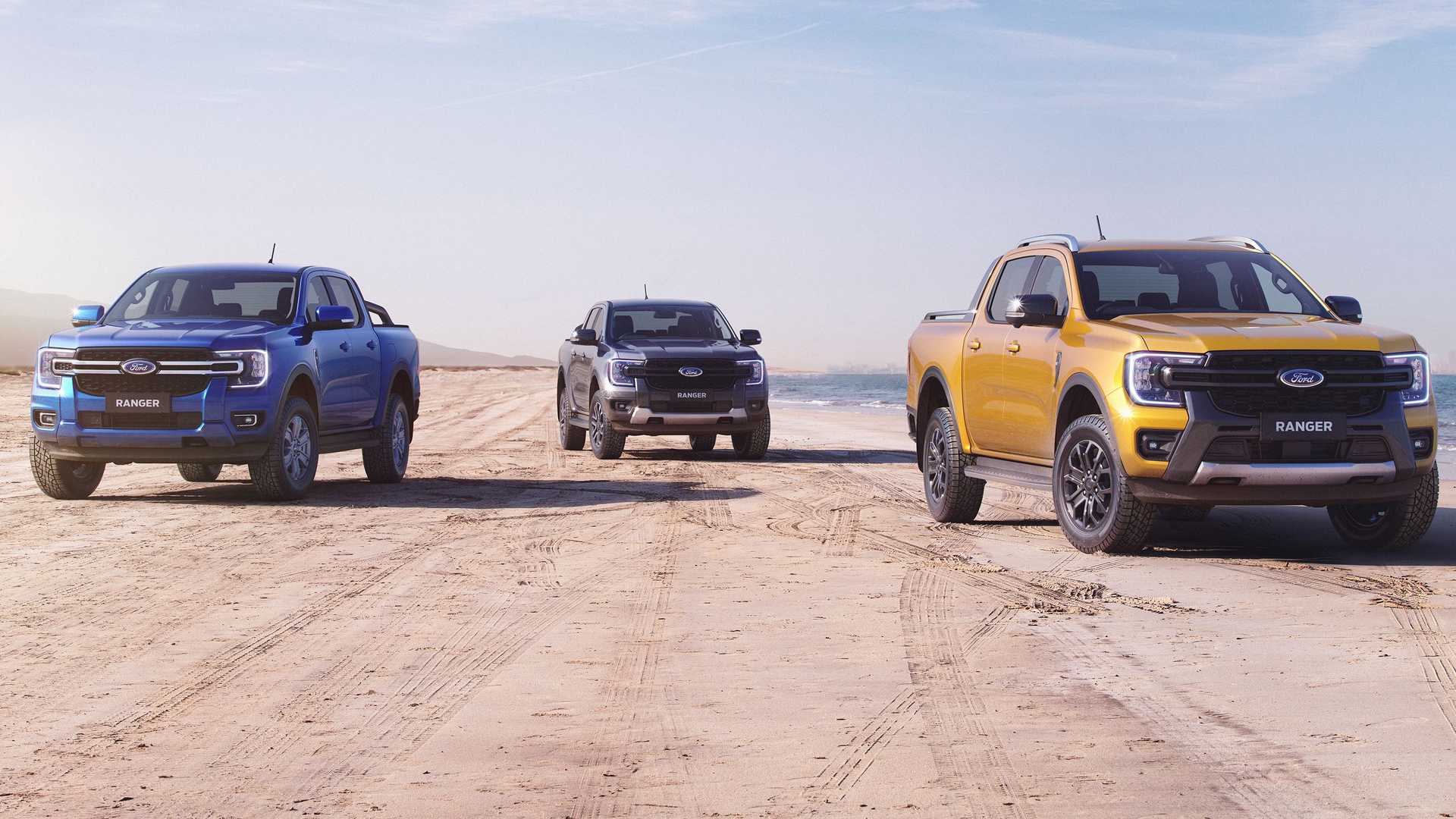 The American blue oval firm has gone and put the global pick-up world on notice by revealing the smartest, most versatile and most capable Ford Ranger ever – delivering an even more desirable pick-up partner for customers.

Using years of Ford pick-up expertise and deep understanding of pick-up customers, the company collaborated with customers around the globe to create a vehicle and ownership experience that next-gen Ford Ranger owners can rely on for their businesses, family lives and adventure.

Ford has really packed a lot into the next-generation Ranger to inspire owners to do more of what they love to do, with features that encourage them to explore new horizons. Ultimately, Ford wants their customers’ experience with the pick-up to enable and enhance their lifestyles. Ford calls this “Living the Ranger Life,” and it’s something shared by every designer and engineer involved in creating the next-generation Ranger.

Customer input was key to developing the next-generation Ford Ranger’s rugged new look. Ford spent a lot of time with owners around the globe, conducting more than 5,000 interviews and dozens of customer workshops to understand how customers used their pick-ups and what they wanted and expected in the new Ranger.

Visually, the new-generation Ford Ranger is bold and confident, with a purposeful exterior that shares Ford’s global pickup design DNA. The design features a defined new grille, and signature C-clamp headlight treatment at the front while a subtle shoulder line down the sides incorporates bolder wheel arches that gives Ranger a sure-footed stance. For the first time, Ford Ranger offers matrix LED headlights. At the back, the taillights are designed in harmony with the signature graphics on the front. Inside, the car-like cabin steps up, using premium soft-touch materials, and prominent portrait-style centre touchscreen with Ford’s signature SYNC™ 4 connectivity and entertainment system.

Beneath the new bodywork is an upgraded chassis riding on a wheelbase 50 mm longer and a track 50 mm wider than the prior Ranger. A hydro-formed front-end structure creates more space in the engine bay for the new V6 engine and helps future-proof the Ranger for other propulsion technologies. It also opens up the front of the pick-up to allow more airflow to the radiator, which helps keep running temperatures low when towing or carrying heavy loads.

Wheel sizes range from new 17-inch alloys up to 20-inch machine-face multi-spoke alloys – a first for Ranger. Eight different exterior colours have been introduced into the line-up.

First things first, and what everyone wants to know, is that yes there is a diesel V6 and no, it won’t be a VW engine. The new Ford Ranger is in three variations; XLT, Sport and Wildtrak.

Customers wanted a choice of more power and torque for towing heavy loads and extreme off-roading, so the team added Ford’s proven 3.0-litre V6 turbo-diesel – that’s found in the F-150, and developed it for the Ranger. It is one of three turbo-diesel engine options that will be available in sub-Saharan Africa from launch.

The next-gen Ford Ranger also come with a choice of proven Single-Turbo and Bi-Turbo 2.0-litre in-line four-cylinder diesels. The Single-Turbo comes in two different performance levels and delivers power, torque and fuel economy, which is important to small business owners or commercial vehicle fleets. The Bi-Turbo engine is a more sophisticated, performance variant for customers who want more power but need to maintain fuel economy.

The engines are mated to an updated 10-speed automatic transmission, six-speed auto or six-speed manual gearbox.

Since Ford has a really wide spectrum of customers, in order to develop the ride and handling expected of a pickup owner’s use for a wide range of work, family and play – engineers focused on the fundamentals. On one end, they have small business owners looking for very work-oriented transportation. They want traditional two-wheel drive with a single cab and a load box to transport their goods. At the extreme other end, they have the serious off-roaders who really push their Rangers to the limit with endurance races like the Dakar Rally. The next-gen Ranger will meet the needs of both types of customers and everyone in between.

Engineers moved the front wheels forward by 50 mm for a better approach angle and outboard for better off-road articulation, both of which improve the off-roading experience. They also shifted the rear suspension dampers outboard of the frame rails to give drivers and passengers a better ride both on- and off-road, no matter if they’re carrying heavy cargo for work, or just taking the family out for dinner.

They have also increased the tuning range to give our customers the best of both worlds – think of this as Built Ford Tough Plus – so you’ve got the capability, toughness and durability that Ford pickups are known for, plus comfort and a more car-like ride that Ranger is known for.

Customers wanted a flexible, modern cockpit that caters to both work and family duties. So, Ranger needs to serve as both a workspace and a haven, providing smart and connected features with more comfort and storage options than ever before.

The heart of the Ford Ranger’s connective experience is the large 10.1-inch or 12-inch touchscreen in the centre stack. It complements the fully digital instrument panel and is loaded with Ford’s latest SYNC™ 4 system, which comes customer-ready with its voice-activated communications, entertainment and information systems. Additionally, there’s an embedded factory-fitted FordPass Connect modem, allowing connectivity on the go when linked with the FordPass™ app, so customers can stay connected to their world. FordPass enhances the ownership experience with features like Remote Start, Vehicle Status, and remote lock and unlock functions via a mobile device.

The screen also is linked to a 360-degree camera to make parking a breeze in tight urban spaces or to assist when negotiating particularly tricky terrain while out exploring. In addition, customers can control Ranger’s new exterior zone lighting system via the touchscreen or the FordPass app, which means they don’t have to work, camp or do anything in the dark. Ranger technology will also be future-proofed to accept Ford Power-Up wireless software updates thanks to the embedded FordPass Connect modem.

The design team also created clever storage and useful features for owners. There are not only places to store your phone or charge it wirelessly – where compatible, but there’s a large centre console bin to stash things. In addition, the door pockets are designed to carry more, the wide dash conceals an upper glove-compartment and there are storage bins under and behind the rear seats.

Ford saw a big improvement opportunity when they met with customers and observed how they climbed up to the load box. There were people stepping on the tyre and then going over the side of the pickup or hoisting themselves onto the open tailgate.

That was the inspiration for creating an integrated side-step behind the rear tyres of the next-generation Ranger, to create a strong, more stable way for them to access the box. In addition, the Ranger team worked to ensure that a wider variety of cargo could fit and stay secure in the load box.

Widening the track by 50 mm may not seem like a lot, but it makes a huge difference, especially in the cargo box. It means that customers will be able to load flat, some pretty fundamental items – such as a sheet of building plywood or a full-size pallet

In addition, the new Ford Ranger offers a new cargo management system designed with dividers to hold various sized items – like timber or toolboxes. Owners also can create smaller compartments to store objects, which would otherwise have to go in the cab, using a system of ultra-strong spring-loaded cleats that clip into rails bolted to each side of the cargo box. The tailgate can also double as a mobile workbench with an integrated ruler and clamp pockets to measure, grip and cut building materials.

Zone lighting – controlled via the in-cabin SYNC™ screen or through the FordPass app – provides 360-degree lighting around the truck to help give customers better visibility around the vehicle. Load box lighting is provided under the left- and right-hand rails and provides plenty of light for finishing up jobs in low light or finding things in the cargo box at night.

With so much focus on customer needs, Ford has become a lot more customer centric and depending on the market they will provide a suite of services such as being “always on” – whether you have questions about the vehicle or need assistance. They have Ranger Concierges in key markets that will walk you through whatever you need to know, the FordPass App, or if you have a question or want to learn more about how to best use the Ranger’s hi-tech features, such as the Ford Pass app, it’s covered with its “Master your Ranger” virtual or hands-on education.

The next-generation Ford Ranger is built at Ford’s plants in Thailand and in South Africa for the sub-Saharan market at Silverton, Pretoria.