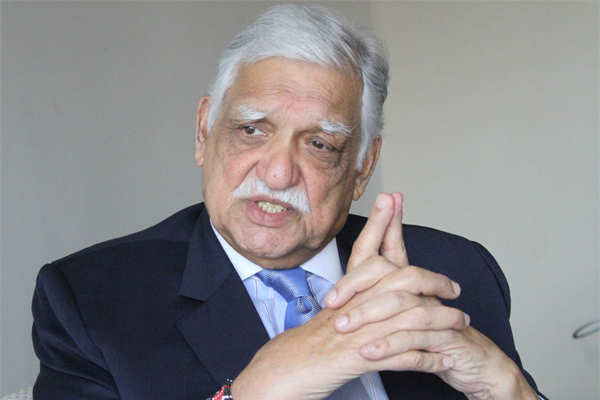 Nizar Juma has received awards and honours for a wide spectrum of services. In 1982, H.E The President of Kenya Daniel Arap Moi bestowed on him The Silver Star of Kenya Award, for outstanding service to the nation of Kenya.

To colleagues active in the international dialogues organised by the ‘the future of power: the future of leadership’ Nizar Juma is a man of great integrity and passion. Through these conversations, Nizar has been a leading advocate in the quest and pursuit for understanding how to be ‘an enlightened leader’.

Nizar is the Initiator, Co-host and Mentor of The Future of Power Dialogues, in partnership with the Brahma Kumaris, a series of exclusive conversations exploring shifts in power and their impact on responsible leadership.

Those who have participated in these conversations rank Nizar’s great conversations as insightful, brilliant and incisive. According to a post on LinkedIn, Nizar’s work life combines an inspiring mission to remove corruption from business life in East Africa alongside disciple-ship on a more sustainable, reflective and meditative leadership, riding on the back of Conscious Leadership.

Nizar Juma is a business and industry leader who is extremely gifted in bringing people of similar passion and interest together, as he has been doing over the last four years since founding The Blue Company project in September 2017.

An embodiment of empathy, kindness and courage, Nizar has since 2000 to date been actively involved in a voluntary capacity as Chairman of numerous Boards of The Aga Khan Development Network (AKDN), in their social welfare activities, including not-for-profit hospitals; and in their development activities in power generation, fibre optics cabling systems, agriculture, banking, pharmaceuticals, insurance, food processing and property development. This involvement has seen Nizar Juma chair the boards of numerous organisations, currently including IPS Group, SEACOM, Bujagali Holdings, Farmer’s Choice, Industrial Promotion Services. Nizar also seats on the Board of Diamond Trust Bank (DTB) and in Adidas Teamsports as Managing Director.

In a nutshell, Nizar Juma is to those who know him, an accomplished entrepreneur, seasoned industrialist and mentor to many, with the belief that soft power should be part of one’s everyday life. This befitting description is confirmed in the introductory lead of his LinkedIn profile. According to Bankim Mandal, a director and founder at Newzealandwine.in, Nizar is more of a mentor than a boss, to those with the privilege to work under him.

Nizar Juma has received awards and honours for a wide spectrum of services. In 1982, H.E The  President of Kenya Daniel Arap Moi bestowed on him The Silver Star of Kenya Award, for outstanding service to the nation of Kenya. H.E Mwai Kibaki recognised him in 2013 for selfless service through the Asian Foundation, for service to the people of Kenya. In 2014, Nizar was bestowed with the Bharat Gauray Lifetime Achievement Award by the British Minister for Energy and Environment, Baroness Varma at The House of Commons, Westminster, London. In 2015, Nizar was acknowledged as one of the 100 Leading Global Gujarati leaders in the publication, ‘Jewels of Gujarat’.

Nizar N. Juma is the Group Chairman of Jubilee Holdings, a financial service holding company, with its headquarters in Nairobi, Kenya. The company maintains subsidiaries and associated companies in Kenya, Uganda, Tanzania, Burundi, and Mauritius.

While its main activities are in the insurance sector, Jubilee Holdings PLC is a large financial services conglomerate in East Africa, the Indian Ocean Islands, and parts of southwestern Asia.

As of December 2013, the company controlled assets valued at over $678 million (Ksh61.16 billion), with shareholder’s equity of approximately $119 million (Ksh10.7 billion). The company’s subsidiary in Kenya, Jubilee Insurance Company Limited, was the largest insurance company in that country, the largest economy in the East African Community, according to a report by the Insurance Regulatory Authority, released in December 2014.

PrevPreviousTop 25 Most Influential Chair of Board Impacting Business
NextAfrican countries are stuck on the free movement of people. How to break the logjamNext