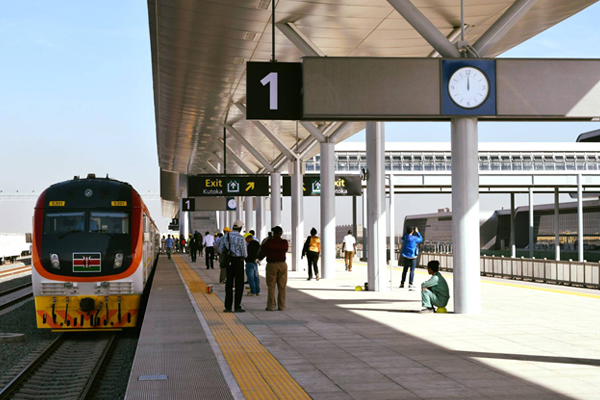 KRC has been intentional about preserving the old meter gauge and leveraging on it to unlock economic potential.

PROVIDING AN EFFICIENT AND EFFECTIVE RAIL AND INLAND WATERWAYS TRANSPORT

When the British colonial administration started construction of the meter gauge railway that links the Port of Mombasa to Kisumu (at the time named Port Florence) in 1896, they were following a tried and tested development model.

Anywhere in the world where railroads have been constructed in the preceding century, economic transformation in towns and communities in surrounding areas have swiftly followed. This was the case in the U.S. and Europe (where the world’s first public railroad was launched in England in 1825). Kenya, though smaller by comparison, would be no exception.

The completion of Kenya’s meter gauge railway line at the turn of the 20th century not only led to the establishment of several important urban centers, including Nairobi the capital, but also dramatically lowered the cost of transporting many kinds of goods, giving the country a head start in industrialization relative to many African peers.

More than a century later, the meter gauge railway still stands strong, despite periods of embarrassing neglect and mismanagement in post-independence Kenya. While the more recently constructed Standard Gauge Railway (SGR) has redefined rail transport between Mombasa and Nairobi, the old meter gauge still occupies an important place in the country’s transport network. It provides crucial linkages between Nairobi and Kisumu, as well as Nairobi and other inland markets, including towns such as Nakuru, Eldoret and Nanyuki, just to name a few.

Kenya Railways Corporation (KRC), the state corporation that manages rail infrastructure and transport services in the country, has been intentional about preserving the old meter gauge and leveraging on it to unlock economic potential. Overall, KRC has revived over 566 kilometers of dead meter gauge railway over the past few years.

Under the leadership of Managing Director, Phillip Mainga, KRC has already registered one notable success in its mission of reviving the old meter gauge. The state corporation has completed the rehabilitation of the Nairobi – Nanyuki line, leading to the resumption of cargo and passenger train services along the route after an absence of almost 20 years, thanks to funding from the Kenya Pipeline Company (then under the chairmanship of John Ngumi) and the National Treasury (under CS Yakur Yatani).

For passengers, KRC currently offers one round trip per week, with the frequency set to increase in line with demand. The Nairobi – Nanyuki service operates on Fridays, and the Nanyuki – Nairobi service runs on Sundays. Each train has a capacity of 1600 passengers, the equivalent of 120 matatus – signaling the positive ripple effect that resumption of rail transport along the route will have on public transport efficiency. Tickets start at Sh200, a saving of as much as 60% compared with matatu fares of around Sh500.

The rehabilitated railway line is also a boon for traders in the agricultural towns along the line. It allows coffee and tea farmers to move their produce at greatly reduced costs, improving their margins and livelihoods. KRC has also reintroduced livestock transport, meaning livestock farmers can transport their cattle from Nanyuki Railway Station to Nairobi’s Kenya Meat Commission Deport safely and at reduced costs.

Besides Nanyuki, some of the towns lying on the 178-kilometre line are Marua, Karatina, Chaka, Naro Moru, Sagana, Maragua, Makuyu, Thika and Ruiru. A number of these towns have suffered low economic activity since the collapse of the railway, but the recent refurbishment of the line is expected to help them regain their lost glory, revitalize trade, and boost the region’s economic and social activities.

The Ksh3 billion rehabilitation of the Nairobi–Nanyuki line was carried out over six months, with KRC contributing Ksh1.2 billion to the project and the remaining Ksh1.8 billion being provided by the state-owned Kenya Pipeline Corporation.

The work included site clearance of the entire corridor and the removal of encroachments, the rehabilitation of infrastructure and rolling stock, and the leasing of locomotives, as well as the construction of an extension to the Vivo Energy depot in Nanyuki and a new station at Chaka. The respected members of our armed forces also contributed in human resource and security components.

Another important project KRC has brought to successful completion is the rehabilitation of the Nakuru – Kisumu line. The 217-kilometer Nakuru-Kisumu MGR line is fully connected. The Ksh3.8 billion project, which started mid last year, is expected to unlock tremendous economic and social value for communities in Nakuru, Njoro, Molo, Londiani, Kericho and Kisumu, among others.

The Nakuru-Kisumu line had been dormant for 25 years, making this rehabilitation a game changer in every sense of the word. There is a total of 18 stations along the line, all of which have been renovated and expected to be operational. They are expected to stimulate trade and revitalize dozens of local economies. Passengers will also get to enjoy the scenic Rift Valley during travel, unlocking the untapped domestic tourism potential of the region.

KRC Managing Director Phillip Mainga is upbeat that the passenger train services on the meter-gauge line to Kisumu from Naivasha (Nakuru County) will be up and running before Christmas. “We are looking forward to having a Christmas gift to the people of this region by moving the first passenger train between November and December,” says Mainga. He maintains that the revival of the railway line will reduce accidents on the road and lead to cost savings in view of the millions of shillings used to repair roads damaged by trucks ferrying cargo, especially petroleum products from Mombasa to the shores of Lake Victoria.

KRC has been able to move with speed and precision thanks to recent reorganizations that have given the state corporation a new lease of life. Besides the focused leadership of Managing Director, Phillip Mainga, who ascended to the position in 2020 after working up the ranks, KRC is now a major cog and part of the recently launched Kenya Transport and Logistics Network (KTLN).

Created by Executive Order, the state agencies under KTLN are KRC, Kenya Pipeline Company (KPC) and the Kenya Ports Authority (KPA), all of which have been brought under the coordination of the new look Industrial and Commercial Development Corporation (ICDC) as a holding company. Of note, ICDC now sits under the National Treasury. The synergies and efficiencies that have been unlocked by this realignment will provide a strong footing for KRC to continue implementing its transformative agenda.