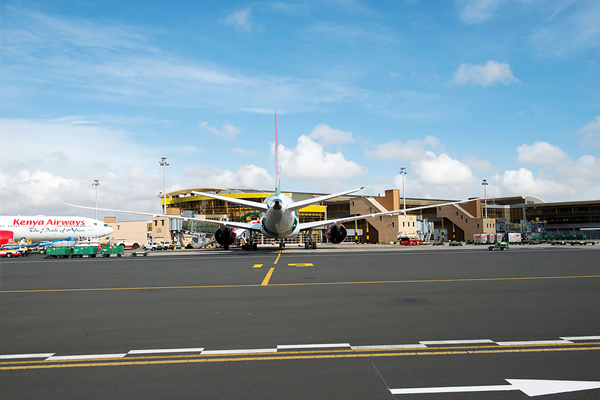 The airline industry is an important contributor towards economic development. It not only supports thousands of highly skilled jobs, but also facilitates international trade and tourism. The International Air Transport Association (IATA), the global trade association for the airline industry, estimates that aviation accounts for 4.6 per cent of Kenya’s GDP and supports 410,000 jobs. The industry, however, requires sustained investments in infrastructure and other support services to thrive, bringing the role of the Kenya Airports Authority (KAA) into sharp focus.

Jomo Kenyatta International Airport (JKIA) is unquestionably the crown jewel of Kenya’s aviation industry, serving as an important hub for passengers connecting to Europe, the U.S., and the Middle East as well as the region’s leading cargo hub. KAA has over the past decade invested billions in overhauling operations at the JKIA, improving safety standards and bringing world-class customer service at the facility.

The projects include refurbishment at Jomo Kenyatta International Airport (JKIA) Terminal 1B and Terminal 1C in Nairobi, Kenya’s largest aviation facility and the busiest airport in East Africa. The refurbishment and facelift of the Terminal 1B and Terminal 1C aims to align the passenger experience in these terminals to match what is offered at Terminal 1A, explains Kenya Airports Authority MD/CEO Alex Gitari. “The remodeling project is an integral part of the ongoing JKIA Customer Service Improvement Plan which was formulated from feedback from our shareholders and customers.”

The new facility will also guarantee efficiency through open and spacious departure gates and free flowing movement of passengers in a spacious environment with clear signage to ensure all passengers get to where they need to be with minimum delay.

“Once completed, the newly renovated light-filled departure terminals will deliver modern concessions and amenities that will give travelers a friendly and memorable experience. It will also ease passenger flow and increase efficiency due to the centralization of security screening procedures and the reallocation of available floor spaces to international departure gates,” says KAA in a recent statement.

This refurbishment builds on previous initiatives aimed at improving the international profile of JKIA, including getting clearance for direct flights between Kenya and the U.S. – an achievement that took close to a decade of sustained efforts to attain, requiring specific infrastructure and security improvements.

JKIA met all international safety standards in 2017, gaining the Category 1 status needed to provide direct flights to the United States. As part of the project, a modern terminal separating arriving and departing passengers was constructed. This has not only improved security, but also improved the capacity of JKIA. Today, the airport can handle up to 7.5 million passengers annually, up threefold from 2.5 million before the expansion.

The transformative initiatives at JKIA have not gone unnoticed. The airport has bagged several prestigious international accolades through the years, underlining the culture of excellence that KAA is promoting in Kenya’s aviation sector. In 2018, JKIA was recognized by Airport Council International (ACI) as the Best Improved Airport in the African Continent in customer service. The Council also awarded JKIA the 2020 Best Airport by Size and Region in the 5 -15 million passengers per year in Africa category.

“I congratulate KAA on the success in the Airport Service Quality Awards which represent the highest possible accolade for airport operators around the world on customer experience,” said ACI World Director General, Luis Felipe de Oliveira during the award.

Besides its hub, Jomo Kenyatta International Airport, KAA is also in the process of expanding and rehabilitating major Airports and Airstrips to enhance passenger experience, to be able to accommodate larger aircrafts and promote tourism. The following are some of the projects the Authority is undertaking alongside JKIA.

In Nyaribo Airstrip in Nyeri County, Kenya Airports Authority is constructing an ultra-modern VIP lounge which will double up as a clearance area for passengers.

Rehabilitation of Nanyuki Airstrip in Laikipia County is also in top gear. The works involve construction of a new 1.5-kilometer runway, a taxiway that can accommodate 52-seater planes, and a bigger apron where the aircraft would be parked once they land. Once completed, Nanyuki Airstrip will connect passengers from Nanyuki to Maasai Mara, Serengeti in Tanzania and other regions.

At Isiolo, KAA, is currently expanding the current 1.4km runway to 2.5km to accommodate larger aircrafts, especially cargo freighters. In addition, the agency has also put up a cargo shed, a facility that eyes, miraa traders and meat exporters to other destinations. So far five airlines have already expressed interest in using the airport.

The project entails replacement of existing airfield ground lighting systems and all approach lighting masts from steel to fiberglass; upgrade of pavements to help in sustainable maintenance regime to keep the runway and aprons in good condition throughout the 20 years design life, and also ensure the airport land is neither undermined, nor destroyed due to unstable ground. It will also enhance airport’s green rating through rainwater harvesting.

The works are divided into three parts namely civil works which comprises of rehabilitation of the entire runway pavements, reconstruction of some sections of the taxiways and aprons and removal and replacement of pre-cast concrete slabs.

With the completion of these works, KAA will have increased the lifespan of the runway for another 20 to 25 years and ensured the safety and passenger comfort of all travelers to Moi International Airport.

Plans are also underway to expand the Ukunda and Lamu Airstrips to enable them handle larger aircraft.  In Lamu, the upgrade involves civil works on the apron and the expansion of the runway from two kilometers to 2.4 kilometers. Works in Ukunda on the other hand involves construction of a security fence for securing the airstrip and a patrol road for security patrols. Ukunda Airport has in recent past seen growth in passenger numbers, necessitating introduction of larger planes.

At the Kisumu International Airport, KAA is set to build a transit cargo shed that is expected to unlock the facility’s cargo handling potential and increase revenue and to boost freight services in the Western Region. The KAA has also expanded the runway accommodate larger aircrafts.

In Kitale Airstrip, KAA is carrying out full reconstruction of the runway which will be 1.45km long and 23m wide as well as re-construction and extension of the apron that will be 336m long and 39m wide. The facility will come in handy in transportation of perishable horticultural produce from one of the country’s breadbaskets.

KAA is targeting tourists from Tanzania to use the Migori Airstrip in visiting the region. The facility is also expected to improve air transport in the area as passengers travelling to South Nyanza have for long relied on Kisumu International Airport, which is miles apart. The rehabilitation works at Migori Airstrip involve full reconstruction of the runway, construction of a new apron, security fence and patrol road.

The Kakamega Airstrip is being upgraded to accommodate Code 1C Aircraft in line with the International Civil Aviation Organization (ICAO) standards. The project will involve development of the airstrip pavements to bituminous standard to accommodate larger aircrafts. The construction work, which started in June last year will cost Ksh174 million with the contractor expected to complete the project by the time of our going to press.

Alex Gitari is the Managing Director (MD) and Chief Executive Officer (CEO) of KAA, having earlier provided effective leadership at KAA in an acting capacity. Before his elevation to the position of Acting MD, Alex was the KAA’s General Manager for Finance. Alex emerged the best candidate after a rigorous interview process which was conducted as per the KAA Act and the Public Service Commission (PSC) of Kenya guidelines.

Alex takes over as the recovery of the aviation sector begins to take momentum and is expected to drive growth by embracing new innovations, creativity that will deliver key infrastructure projects and further ensure that the country’s flagship airport, JKIA remains positioned as the preferred hub in Africa.

Gitari holds a Masters of Business Administration (MBA) degree in Finance from the University of Nairobi (UoN), an Advanced Management Program from the Harvard Business School (HBS), and a Bachelor of Commerce (B. Com) in Accounting (UoN). Before joining KAA, Alex’s experience and exposure include a broad range in business development and marketing, project appraisal, strategy formulation and execution, policy formulation, risk management, resource mobilization and financial management. Over the years, Alex has built an extensive network of contacts within the international financial services, including a stint as the Director, Finance at the PTA Bank and as a Senior Management Consultant at Price Waterhouse Coopers (PWC).