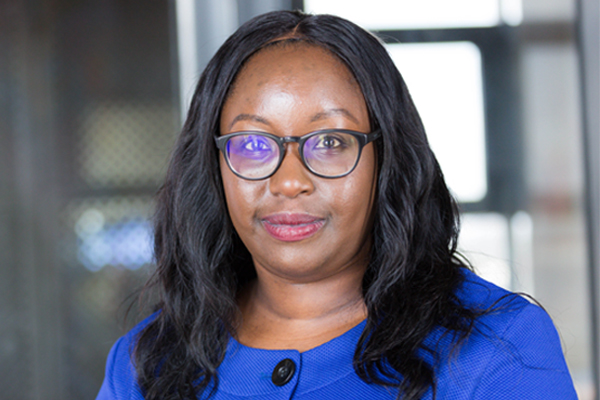 Risper Genga Ohaga is a seasoned professional with over 20 years’ experience spanning multiple countries. She joined EABL from Barclays Africa Group (now Absa Group) where she spent 12 years in senior roles, starting as the Regional Director for Audit based in Nairobi, before moving to Johannesburg as the Managing Director for Internal Audit.

Risper is the Group CFO of EABL since February 2020, the first African woman to hold this position in the history of EABL. In this role, she is a member of the Board, charged with driving the finance and strategy functions of the company and its subsidiaries with operations in Kenya, Uganda, Tanzania, South Sudan and Rwanda.

The timing of her transition into this role coincided with the onset of the Covid-19 pandemic, making her even more instrumental in the running of this company together with the company’s Managing Director. During the last year, her focus has been on steering the company’s performance through the pandemic and ensuring that EABL is poised to emerge stronger after the crisis. This has been a time to operate with agility, quick prioritization and decision-making as well as collaboration both internally and externally.

Despite the initial impact on the business in 2020, her work with the Board and management has seen EABL report a solid performance for the first half ended 31 December 2020, demonstrating the resilience of the company’s brands, people and strategy. Risper is credited with partnering with the respective subsidiaries to adapt the strategy in light of Covid-19; and delivering a strong balance sheet which has enabled the business to respond to the changing environment through the crisis.

With a financial year ending 30th June, EABL was the first company to report results impacted by Covid-19 and Risper, working with the Board, was faced with the first dilemma of issuing a profit warning as results were impacted by the market closure. In line with EABL values, it was always clear that the right thing to do was to inform shareholders and the public at large of the impact of the pandemic on the business performance as required by regulation. This bold action saw the share price hold, despite the anticipated decline in profit, demonstrating the faith EABL investors have in the company doing the right thing. Concerted efforts after the year end saw positive half year results and EABL’s share registered the second highest growth in the securities exchange, having grown 13.1% on a year-to-date basis. This is testament to the market’s confidence in the company’s future performance and the resilience in weathering the crisis.

Looking back at this period, Risper credits this to the company’s focus on making the right decisions in the long term for its employees, shareholders and community. Specifically, despite the impact of Covid-19, the company set aside US$5m to support retail outlets across East Africa in managing the impact of the pandemic on their businesses by providing critical equipment and resources to ensure that health protocols would be in place once the outlets reopened.

Uniquely, from January 2021, EABL is now the only listed company where the top two roles, Group MD and Group CFO are both Kenyan females, setting a standard for a world in which Kenyan woman are shattering the glass ceiling. Working with the Group MD, Jane Karuku, Risper sees a unique opportunity to deliver even stronger results in an enabling and inclusive culture.

Risper is a seasoned professional with over 20 years’ experience spanning multiple countries. She joined EABL from Barclays Africa Group (now Absa Group) where she spent 12 years in senior roles, starting as the Regional Director for Audit based in Nairobi, before moving to Johannesburg as the Managing Director for Internal Audit. She joined Barclays in the wake of the 2008 global financial crisis as part of the Global Internal Audit team run out of London and was the first African Director based outside South Africa.

Reporting into the head offices in Dubai and London, her role was to build capacity and deliver a high-performing team that would partner with the organization to build a future-proof risk culture. She excelled in this role and was so exceptional that she was nominated as the winner of the most outstanding audit professional in the whole of Barclays globally. She set herself apart by building a strong team, and being a proactive leader who worked with the management team to pre-empt and address issues before they became reportable. Her former boss, Adan Mohamed, later appointed Cabinet Secretary, described her as one who was so diplomatic that when she gave you bad news, you felt inclined to apologize to her instead for not doing the right thing.

After 3 years, she left a highly energized and performing team to relocate to the head office in Johannesburg where she was responsible for the audit of the Bank’s 10 subsidiaries in Africa excluding South Africa. Within a few weeks, her new boss noted her potential and expanded her portfolio to include coverage of the South African retail business, the largest component of the bank’s business. At this stage, she also joined the global faculty responsible for audit training for all audit staff globally.

In this expanded role, she distinguished herself as a leader whose excellence transcended cultures and geographical boundaries. In the three years she held this role, she further expanded her role to include the bank’s Wealth, Investment Management and Insurance business, extending her experience further. While doing this, she strengthened the team, built strong leaders and then handed the baton over to them in order to pursue the next stage of her career.

In early 2015, with the aim of eventually returning to Kenya and moving from risk management into general management, she changed gears, moving into core finance with an initial brief stint on secondment in Mozambique where she spent seven months before being seconded to Barclays Bank Zambia as Finance Director, a role she held for four years. In this role, she distinguished herself as a delivery-focused leader who steered the business as Finance Director, through a very turbulent economic period, delivering strong results through the period and improving the bank’s risk management processes and controls. BBZ, one of the top 3 banks in the country registered sustained growth through this period and also remained one of the key businesses in the Group’s portfolio.

Risper is known for her strong values and high integrity as well as her drive for excellence. These characteristics are rooted in her upbringing, reinforced by her schooling at Precious Blood Riruta, and cemented in her training at KPMG where she started her career and spent 9 years honing her skills and building the foundation for the work she does today. She credits KPMG with building her into the professional she is and inculcating strong values and work ethic right at the beginning of her career.

As a leader, Risper has distinguished herself as one who believes in the power of the team and works to create a positive and affirming culture. She has a firm belief that people deliver for you once they know that you care about them and will unblock any obstacles in their way to guarantee success. This is something she has replicated across different organizations, countries and cultures, with outstanding results both in terms of performance and in developing people into leaders. She believes in leaving every role and every person she works with better than she found them. Her compassionate and affirming leadership invokes a high standard of delivery in everyone she works with. She takes pride in the number of people who were part of her teams that have gone onto take on even bigger challenges across the world.

Risper believes in making deep and meaningful impact, investing herself in projects that have most impact on individuals and society. She runs mentorship groups coaching young leaders, something she implemented in South Africa as well as in Zambia and in Kenya. She also has a heart for the less fortunate, adopting and supporting projects that cater to orphaned children. Kafua drop-in Centre in Lusaka is one that remains close to her heart even after leaving Zambia.

Moving back to Kenya, the choice of EABL as an employer, away from the world of banking where she spent the largest part of her career, was premised on the alignment of the organization’s values with her personal values. EABL’s ambition to be the best performing, most trusted and respected consumer products company in Africa is something that resonates to her personally and allows her to lead authentically and with impact.

Risper holds a Bachelor of Commerce Degree (Accounting Option) from the University of Nairobi, is a Certified Public Accountant of Kenya (CPAK) and a Certified Internal Auditor (US). She has also attended a Director Development Programme with the London Business School. She is a three-time recipient of the top 40 under 40 award. She is a member of the Board of EABL and Kenya Breweries Limited. She has also served on the Board of Barclays Bank Zambia.