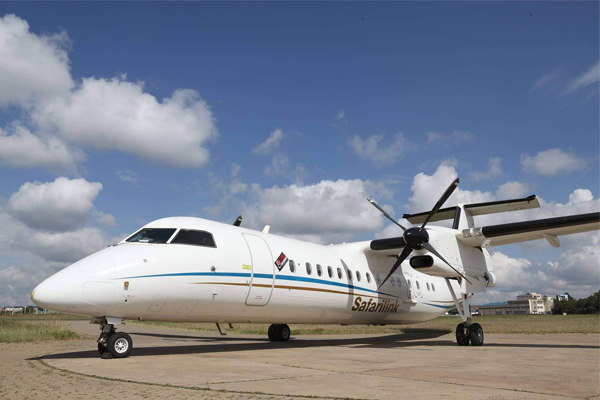 Safarilink’s diverse partnerships with local stakeholders have enabled it to successfully participate in addressing environmental challenges.

Safarilink is Kenya’s premier safari airline with a network of connecting domestic scheduled services to all the best safari destinations within Kenya and across the border into northern Tanzania.

Safarilink operates out of Wilson Airport Nairobi into 18 destinations, with a fleet of 14 aircraft. Safarilink schedules connect passengers within Kenya, Tanzania, and Zanzibar with 25 daily flights manned by a total of 200 skilled professionals.

Safarilink’s diverse partnerships with local stakeholders have enabled it to successfully participate in addressing environmental challenges. It is renowned as the first airline to partner with MT. Kenya Trust‚ committing itself to the carbon offset program and became the first Airline to be awarded the Ecowarrior award of the year by Ecotourism Kenya.

Deeply concerned with the environment and having worked with local stakeholders to plant over 21,000 trees‚ Safarilink was nominated and awarded the prestigious Ecotourism sustainable airline award consecutively from 2010-2016.

In 2016‚ Safarilink earned a judge’s recognition award courtesy of Ecotourism Kenya for outstanding commitment and consistency in its CSR Projects.

Safarilink is always grateful to all the partners, and it strives to engage in more projects as it stretches its wings more destinations across the country.

In 2010 for instance‚ Safarilink was recognized for, among others‚ aggressively contributing to and assisting government campaign to reduce carbon emission by 30% by the year 2030. In that year‚ Safarilink, among other CSR activities, strengthened local women’s groups with training‚ equipment’s and tree seeds.

In the following year‚ Safarilink was honoured for its generous commitment to donate a fee from each passenger fare in or out of Diani Airstrip to support Colobus Conservation. Still‚ in Lamu‚ Safarilink supports air transport for doctors and patients in conjunction with the Medical and Education Aid for Kenya (MEAK)‚ to save lives.

Safarilink is pleased to announce that in 2019 it successfully completed the IATA Standard Safety Assessment (ISSA) audit designed for commercial airlines and the airline was the first airline in Africa to achieve this certification and is now on the ISSA registry. The assessment covered the following disciplines:

The IATA Standard Safety Assessment (ISSA) Program is an evaluation system designed to assess the operational management and control systems of an Operator and to extend the benefits of operational safety and efficiency that emanated from the IATA Operational Safety Audit (IOSA) Program for operators of aircraft below 5‚700Kg maximum take-off weight (MTOW) who are not eligible for the IOSA program.

Safarilink’s Chief Executive Officer, Alex Avedi says‚ “I am very pleased with this exceptional achievement‚ we are now officially the first carrier in Africa and Middle East to get this prestigious certification and only the fourth in the world. This is an assurance that our Airline operations meet the highest international safety standards. I would also like to thank the dedicated staff of Safarilink Aviation who always ensures our clients have a safe and memorable experience when flying with us”.

Safarilink has had many firsts including being among the first African airline to be carbon neutral through a partnership with Mt. Kenya Trust on a tree planting program as part of its Corporate Social Responsibility.

Safarilink operates out of its head office at Phoenix House, Wilson Airport, off Langata Road, where it is based.