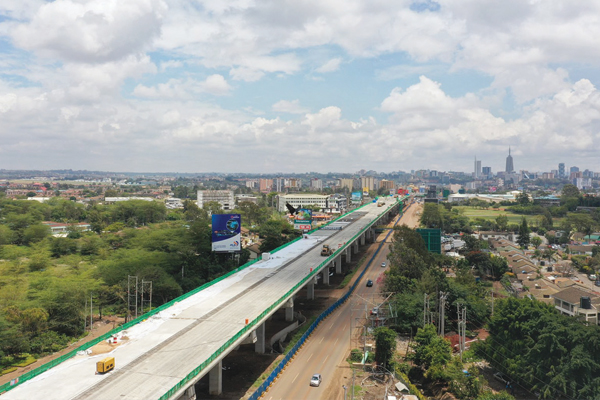 Once completed, the four-lane dual carriageway will run over 27km, linking Mlolongo town in Machakos county and Jomo Kenyatta International Airport to the Nairobi-Nakuru highway.

An expressway, currently being constructed through Kenya’s capital, Nairobi, is nearing completion. The Chinese-financed toll road starts near Jomo Kenyatta International Airport in the east and ends on the western edge of the city. Urban planning expert Laji Adoyo provides insights into the role this road will play and whether it addresses the city’s challenges.

Why is the new expressway being built?

The government of Kenya is constructing the Nairobi Expressway Road project. Once completed, the four-lane dual carriageway will run over 27km, linking Mlolongo town in Machakos county and Jomo Kenyatta International Airport to the Nairobi-Nakuru highway. The expressway is part of the northern corridor that provides passage to 85% of the cargo destined for neighbouring landlocked countries, such as Uganda, Rwanda, the Democratic Republic of Congo and South Sudan.

The benefits that are expected from this expressway include improved connectivity for the transport of goods, services and people between Nairobi and the entire northern corridor. It’s also expected to ease the flow of traffic through the city, reducing congestion along Mombasa Road, Uhuru highway and Waiyaki way in Nairobi city.

Better traffic flow would reduce travel time through the city, enhancing Nairobi’s economic vitality. This in turn is expected to improve Kenya’s competitiveness in the East Africa region and entrench Nairobi’s position as a business hub.

How will it operate?

The project is a partnership between the government of Kenya and China Roads and Bridge Corporation, one of China’s state-owned companies.

The government of Kenya’s key functions have to do with land acquisition, relocation of services, and oversight. It is estimated that the government of Kenya spent more than Ksh 2 billion (about US$18 million) on land acquisition for the project. The China Roads and Bridge Corporation is expected to construct the road in three years. After this, the corporation will operate and maintain it for 27 years. During this time, it will charge and collect toll fees from vehicles using the road.

It is proposed that each driver would be required to pay a fee of between 100ksh and 1,550ksh (about US$1 and US$15), depending on the size of the car and distance travelled.

The idea is that the corporation will recoup its investment and make a profit before handing it over to the government of Kenya by 2049. It’s expected that the toll charges will fluctuate to cushion the Chinese operator from exchange rate losses.

Some have argued that it is entirely a government project since it is a partnership between the governments of Kenya – through the Kenya National Highways Authority (KENHA) – and China, through the China Roads and Bridge Corporation state corporation.

To what extent does it address the city’s transport challenges?

It will free up one of the city’s main arteries, the A8 road (Mombasa Road, Uhuru Highway and Waiyaki Way). This road has had traffic congestion for years.

The economic cost of Nairobi’s traffic congestion is estimated to be in the billions of Kenya shillings. It has been observed that at peak hours, it takes motorists two hours to commute from Mlolongo to Waiyaki way, a distance of about 27km. It’s expected that the expressway will drastically reduce rush-hour travel time from two hours to about 15 minutes.

The planned dedication of a lane on the expressway to the Bus Rapid Transport will contribute to decongestion. The expressway is also expected to significantly reduce response time to emergencies as it will have dedicated emergency lanes on either side.

But it’s been flagged that the expressway is not a serious attempt to deal with congestion. This is because it’s a road for those who “are able to afford it”, a public subsidy for the rich, so to speak.

Walking is the dominant mode of transport in Nairobi, accounting for 45.6 per cent of commuters, compared to 40.7 per cent by bus, 13.5 per cent by private vehicle, and 0.2 per cent by rail. These residents of the city walk because they cannot afford to pay the fare charges.

There are concerns, and justifiably so, that the tolls could prevent some drivers from being able to use the road. For instance, the anticipation that matatus will use the expressway and pay the toll charges is speculative. It should also be noted that only high-capacity express buses will be allowed to use the dedicated bus lanes. Matatus are minibuses–the most widely used buses–do not qualify as high-capacity buses.

This, coupled with the fact that the existing A8 road will stay as a free alternative to the expressway, means that motorists who cannot afford toll fees would continue using the traffic-laden A8 road. The expressway will be accessible to only a small percentage of Kenyans that use their personal vehicles or for trucks while the rest struggle with limited options.

This will not only worsen the city’s traffic problems, but also fuel socioeconomic divides.

What else can be done to improve the city’s transport problems?

Experience from around the world shows that building more and wider roads does not necessarily translate to reduced traffic congestion. This is likely to be the fate of the Nairobi expressway.

While the government has continued to focus on building wider roads to serve the growing number of vehicles, most commuters in Nairobi rely on walking or public transport.

The government also should ensure that a reliable, safe, efficient and comfortable public transport system is set in place. In addition, there must be a dedicated public transport lanes on roads. This will reduce the number of private cars on the road and decongest the existing roads network.

There seems to be a lack of political will to improve public transport in Nairobi city. When it comes to mobility in the city, the government seems to prioritise the needs of the wealthiest residents above all else.

Moreover, a few influential people often exploit the prevailing situation to make money. For instance, big stakeholders such as matatu cartels take advantage of the chaotic transport system to make money. They charge exorbitant fares on the various routes within Nairobi. In routes like Nairobi’s Ongata Rongai, commuters pay up to between KSH100 and KSH300 (between US$1 and US$3) for a 20km trip, yet, a trip from Nairobi to Nakuru, some 150km away, costs roughly KSH300.

At times, fares are hiked on reasons as flimsy as a change in weather, forcing commuters to spend more than what they intended to. Because of this, they resist any form of improvement of the public transport system.

This article was originally published on The Conversation on November 2, 2021

PrevPreviousKenya’s mega-railway project leaves society more unequal than before
NextTraffic jams are contagious. Understanding how they spread can help make them less commonNext