With the Corona Virus Pandemic, the media ought set National Agenda 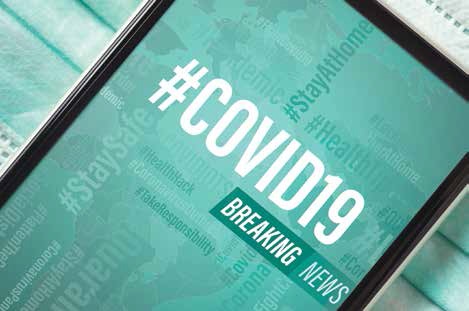 Can we accurately tell Kenyans what to think about the Corona Virus? Through priming and framing, we can.

In the back ground of the declaration of the Corona Virus as a pandemic and the nature of the coverage of the pandemic by the mainstream media, it is prudent to revisit the role of the mainstream media. This article therefore starts with a short story, borrowing heavily from a number of authoritative sources.

Back in 1968, two communication researchers, Maxwell McCombs and Donald Shaw interviewed 100 residents of Chapel Hill, North Carolina, the United State (US) requesting the residents to point out the issues they were most concerned about.

After determining the issues deemed most important, the two researchers evaluated the media serving the county, both print and broadcast for the content being aired or in the print media.

McCombs and Shaw found an almost perfect correlation between the nature of news stories that were covered most often and the residents’ concern for the same issues. The study was repeated in 1972 and 1976. Although the study was on electoral issues, it is regarded as the first to coin
the term agenda setting for the media.

The only difference is that 1968, 1972 and 1976 were election years in the US, and 2020 is the year the Corona Virus has been declared a pandemic by the World Health Organization (WHO). The other difference or variable, is that we did not have an influential and difficult to contain social media, with its tributary, fake news.

In the 1968 research, McCombs and Shaw focused on two elements:

The conclusion in these studies is that the mass media can exert a significant influence on what the audience consider the major issues of the moment, in those studies, elections.

In the same vein, the mass media exerts a significant influence on what Kenyans consider the major issues in economic, social and political issues, as they are currently playing out. In the current case, how to be safe and generally handle the Corona Virus pandemic.

In fact, studies have shown that the numbers or times a story is repeated in the media will affect the story’s importance, regardless of what is said about the topic.

One of the major roles and probably the main one, of a free media in a democratic society is ostensibly to provide the public with well researched and accurate information necessary for them to take part in governing themselves. Media is therefore first and foremost a tool for self –governing, not necessarily a form of business. Hence, the term, the fourth estate.

Therefore, the question of how our media houses decide what stories is important and how to cover the important stories such as the Corona Virus pandemic, becomes a matter of great importance to the survival and recovery of our country from the effects both economic and social, of this pandemic.

Without boring you by glossing over the two main media theories: authoritarian and libertarian, a majority of communication academics and practitioners have hinted that the social responsibility theory is an extension of the two and that the agenda setting and watch dog theories are among

the offshoots of the social responsibility theory. These three theories are, in my opinion, of major
concerns to Kenya as a country at this moment in history.
Agenda setting is simply the creation of what the public thinks is important. Agenda setting
describes a very powerful influence of the medias’ ability to tell the citizens, what issues are
important including the power to present images to the public.

Quoting extensively from communication academics, ‘agenda setting is possible because the media does not reflect the truth but filters and shapes it. Media concentration on a few issues and subjects leads the public to perceive those issues as more important than other issues not given presence and prominence in the media.’

Back to the social responsibility theory, the media have inalienable responsibilities towards the society. The essence of the theory is an affirmative role in advocating also social issues, including health in this case; not just opinions of powerful politicians, organized civil society and
well-oiled business interests.

There is a school of thought that opines that the social responsibility theory needs therefore to involve a number of ways in which the state could play a role in ensuring that media fulfills their social obligations whilst at the same time, retaining the independence of journalism and the freedom of speech. In Kenya, this is the Media Council.

Mass media ought therefore to provide citizens with accurate information and provide education regarding all issues around the Corona Virus, and do so without inflaming passions or crying fire in a crowded cinema hall, as the old adage warns.

Mass media should identify the problems hindering the free flow of accurate information and management of the Corona Virus. Media also should have mobilization function, campaigning for proper and timely manner of managing the pandemic. In essence, these social responsibilities
ought to come before the media rights and freedoms that are always bundied around, now more than ever before.

The mainstream media ought to remain the ‘watchdog’ that the public rely on for revealing errors and wrongdoing in handling the pandemic as well as for accurate information and adequate education to enable objective decision making and understanding of the Corona Virus pandemic.

The function of the media in this process is essential since they determine on behalf of the people, which issues are the most important. Agenda setting in this case, illustrates a very powerful authority of the media, the capability to inform the public what issues are of national importance.

This, the media can do through the usual internal filters and gate keeping, in moments of national emergencies, such as the Corona Virus pandemic.