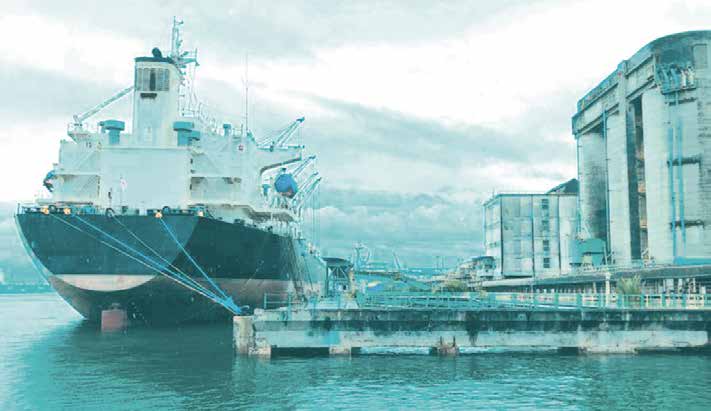 This diplomatic row between Kenya and Somalia is only the tip of the iceberg. Beneath the surface are positions and interests that are being pushed by players far afield including the United States, United Kingdom, France, Italy, and Norway.

A dispute over maritime territory in the Indian Ocean between Kenya and Somalia has resulted in major western countries lining up on either side, depending on which of the two African nations best serves their oil interests. The disputed territory is 100 000 square kilometres with pros-pects of vast oil and gas deposits.
Diplomatic relations between the two countries have been on a steep decline since early 2019, when Kenya accused Somalia of putting Kenya’s blocks up for auction during the February Somalia Oil and Gas conference in London.
Somalia refuted Kenya’s claims. But during the oil and gas confer-ence, it had submitted bidding rules and procedures and also displayed a map of oil and gas blocks which it intended to auction in future. Following the London oil confer-ence, Kenya recalled its ambassador to Somalia and asked the Somali ambassador in Kenya to “depart for consultations.”
Meanwhile, Somalia has a case against Kenya at the International Court of Justice (ICJ). In 2014, Somalia sued Kenya at the ICJ and asked the court to order a redrawing of the sea boundary in Somalia’s favour. 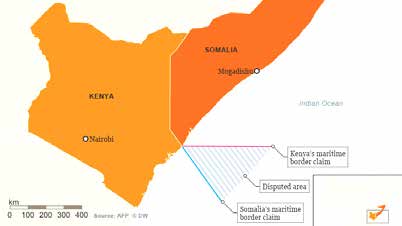 The hearings were scheduled to start on September 3, 2019 but Kenya successfully petitioned the court to adjourn the case until June 2020.
But this diplomatic row between Kenya and Somalia is only the tip of the iceberg. Beneath the surface are positions and interests that are being pushed by players far afield including the United States, United Kingdom, France, Italy, and Norway. Countries like Kenya and Somalia are increasing importance given that some of the largest and most recent oil finds have been in Africa. This could very well continue.

Global interests
The maritime dispute between Somalia and Kenya has attracted the interests of global powers like the US, UK, France, Italy, and Norway, all of whom are keen to share in the exploitation of the resource-rich maritime blocks.
As the dispute has escalated these powers have taken different sides.
The UK, for example, has shown support for Somalia. This is for two reasons. One, UK-Kenya relations have not been the best since the election of Uhuru Kenyatta who became president while a suspect at the International Criminal Court. He faced charges for crimes against humanity for his alleged role in Kenya’s 2007 post-election vio-lence. The charges have since been dropped.
Under President Kenyatta, the Kenya government has grav-itated towards American, Chinese and other interests as compared to British interests. As a result, the UK has moved to consolidate its eco-nomic interests in the region through Somalia.

Norway is also backing Somalia. It has been reported that the country was one of the main bidders at the Somalia Oil and Gas conference in London

Two, Britain has a longer relationship with Somalia in terms of onshore and offshore oil explorations. For instance, British Petroleum (BP) had oil exploration concessions in Somalia from the 1980s until 1991 when Somalia plunged into violence after the ousting of President Siad Barre.
A decade later in 2012, as violent conflict raged on in Somalia, it emerged that Britain was involved “in a secret high-stakes dash for oil in Somalia”, with the government offering humanitarian aid and security assistance in the hope of a stake in the beleaguered country’s future energy industry.
Norway is also backing Somalia. It has been reported that the country was one of the main bidders at the Somalia Oil and Gas conference in London. This could have something to do with the fact that Somalia’s Prime Minister Hassan Ali Khayre is a Norwegian citizen, and that Kenya expelled Norwegian oil giant Statoil.
The US is siding with Kenya because the two countries are partners in the “war on terror”, and the fact that American companies stand to benefit from the oil and gas exploration if the disputed territory is found to be within Kenya’s maritime zone. The two countries have already signed other trade deals worth $100 million. And France is on Kenya’s side given that Total Oil was contracted by Kenya in the disputed maritime zone.

Way forward
The ICJ ruling notwithstanding, Kenya and Somalia need to cooper-ate. They should focus on enhancing their historical ties, and economic and security interests for their mutual benefit. Both countries must remain vigilant against external interests that divide the continent and lay its resources bare for exploitation.
On its part, Kenya needs to demonstrate to Somalia, and other states in the region, that it views them as partners.

Kenya is home to a vibrant Kenyan-Somali community, hosts a large number of Somali refugees, and an increasing population of Somali students in Kenyan univer-sities. Somalis have also made mas-sive business investments in Kenya. These are factors that the country can leverage to restore diplomatic relations.
Finally, Somalia needs Kenya and other African countries to attain sustainable peace and security. So it would be unwise for Somalia to abandon intra-Africa relations in the quest for resource-greedy Western allies. The destiny and future of the people of the two countries are “indissolubly interconnected”. This should be the guiding principle as Somalia and Kenya seek to resolve their maritime dispute through peaceful mechanisms.