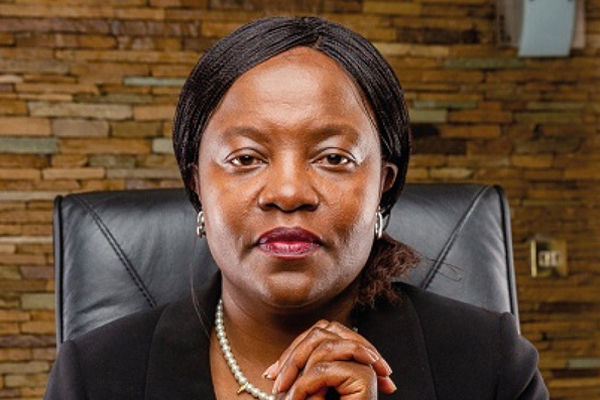 Since the new board’s appointment, Kenya Power has since July this year connected 140,000 new customers against a target of 125,000 despite the Covid-19 pandemic, which had slowed down activities of the firms due to the lockdowns and the need for social distancing.

Ater the release of the unaudited financial results for the period to June 2020 issued by Treasury indicating that The Kenya Power & Lighting Company Plc had sank into a loss of Sh2.98 billion, Vivienne Yeda was part of the non-executive directors appointed to help turn around the fortunes of Kenya’s sole power distributor (also branded as Kenya Power).

During the 43rd Annual General Meeting (AGM) held on November 13, 2020, the UK trained scholar, banker and attorney, Vivienne Yeda was elected the Chair, breaking the glass barrier by becoming the first woman to hold fort at this strategic utility firm, as Chairman.

For those in the know, this appointment is no surprise. Vivienne Yeda is the director general of the East Africa Development Bank (EADB) a position she has successfully held since January 15, 2009. Vivienne Yeda was on the board of the Central Bank of Kenya (CBK) from 2011 to 2015.

Prior to her appointment as the CEO at EADB, Vivienne was Resident Representative and Country Manager-Zambia at the Africa Development Bank Group (ADB).

It is on the broad but sure shoulders of Vivienne Yeda that the country, customers and shareholders of Kenya Power will rest while seeking a turnaround strategy to turn the loss-making tide and change the fortunes of this utility juggernaut and one of the country’s strategic assets and economic enabler.

Among the priority areas already identified by Vivienne is inculcating an integrity culture, practising good corporate governance and re-engineering the organizational performance management structures to help move Kenya Power back to profitability.

Offering customers, the level of service desired, including access to power through efficient and prompt connectivity, improve reliability by reducing outages to the bare minimum and value driven and prompt billing are all on Vivienne’s menu.

Talking to Vivienne on the side-lines of her historic ascension to the helm of Kenya Power, Vivienne hinted that it is a privilege to serve her country, and this she will do with relish as she looks forward to making strategic impact and a difference in the life of the consumers both large and small, business and domestic, urban or rural.

The board, under Vivienne will also target to grow revenue by enhancement of revenue protection measures and supporting demand growth for customers through rationalized tariffs, she says. The new structure, if the firm has its way, might see low-income households pay more for power to support the cost of distribution.

Since the new board’s appointment, Kenya Power has since July this year connected 140,000 new customers against a target of 125,000 despite the Covid-19 pandemic, which had slowed down activities of the firms due to the lockdowns and the need for social distancing.

She is also looking forward to introducing additional revenue streams, including solar and working with county governments through a county-focussed business model, to make each a regional increased revenue and profit centre in order to stem the tide of loss making.

The new board will also follow up on the Government’s extension of a moratorium on concessional loans it had procured on behalf of Kenya Power, as among the initiatives the State is employing to help the company find a firm footing as well as prudence in debt collection especially from other State departments, government agencies, state owned enterprises (SOEs) and county governments.

Vivienne is up to the task, as board chair at Kenya Power, having helped structure management turn around and development financial packages that have supported some of the best companies in the East Africa region, which have since become blue chips in agriculture, manufacturing, education, banking, transport and communications, among other sectors.

At EADB, Vivienne’s greatest challenges include mobilising financial resources from outside East Africa for long-term financing of public and private sector development and turn-key projects in the member states.

Under her, EADB strategically leverages EADB resources in conjunction with other multilateral international financial institutions and funnelling global capital for the benefit of the East African region. At the time of her appointment as CEO, the EADB had been a loss-making financial institution that had not made any profits since the early eighties. Thanks to her dexterity and organisational abilities, the EADB has, since her appointment, made profits, is now rated Baa3 stable by Moodys. EADB is only one of eight institutions in Africa that is rated investment grade.

EADB has developed flagship projects for sustainable development in the agriculture value chain and have more than 5000 SME projects in Kenya and Uganda.

The Bank also supports the training of doctors and teachers through its CSR programmes. METAF is an annual regional training programme for doctors in government hospitals to undergo training in neurology and oncology which has trained more than 400 doctors since inception.

EADB is the only East African development bank. Its mandate is to support development in the region where other DFIs or banks mandate extend beyond East Africa. EADB is 47 years old and has a long track record and experience in supporting various sectors within East Africa.

Recently, our corporate resurgence was recognised by the institutional ranking of EADB as the best in Africa, preceded only by Afrexim Bank, with Vivienne Yeda named the Africa-America Institute’s Business Leader 2014 at an awards ceremony held in New York. Ms Yeda was awarded for her contributions in development banking, finance and business in Africa for over 20 years.

The AAI is a US-based international education and policy organisation dedicated to strengthening the human capacity of Africans and promoting the continent’s development through higher education and skills training, convening activities, partner engagement and research.

While presenting the awards, the former Chief of Staff at the African Development Bank said that the EADB had invested in successful companies, boosting the region’s economic growth. “Today, East Africa is among the fastest growing regions in the world. A great deal of this success is due to efforts made by individuals like Vivienne”.

Not known to most people is that Ms Yeda is a scholar. She holds two Masters degrees from leading global universities: Master’s in International Finance and Law (UCL): (International Economic Law and Multinational Enterprises and the Law -The London School of Economics and Political Science (LSE), Finance and Investment in emerging markets-Law and Development- SOAS University of London) and an MBA (Edith Cowan University).

Locally, she holds a Bachelor’s degree in Law (LL. B) from the University of Nairobi and a Diploma in Law from the Kenya School of law.