Understanding the economic cost of corruption in Kenya 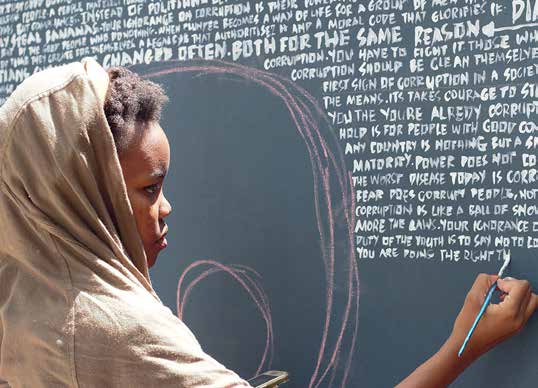 This poor showing shouldn’t come as a surprise. Kenya has been plagued by a long list of corruption scandals. One of the more infamous was the Goldenberg heist which occurred in the 1990s during then President Daniel Moi’s tenure.

Associate professor, University of the
Witwatersrand

Kenya is perceived as one of the world’s most corrupt countries. It ranked 143 out of 180 countries on Transparency International’s 2017 corruption perception index. The only African countries that scored worse – among them Somalia, South Sudan, Libya, Eritrea, Burundi, and Zimbabwe – were either politically unstable or in conflict. This poor showing shouldn’t come as a surprise. Kenya has been plagued by a long list of corruption scandals. One of the more infamous was the Goldenberg heist which occurred in the 1990s during then President Daniel Moi’s tenure. The government was found to have subsidised exports of gold far beyond standard arrangements by paying a company called Goldenberg International 35% more in Kenyan shillings than their foreign currency earnings. More recently, in 2014 millions of dollars were misappropriated from funds that were secured by the government through a Eurobond, which is an international loan that was secured from foreign investors. A second Eurobond was secured in 2018 and questions have been raised here as well. Yet, the looting of public coffers is more commonly reported in recent times and the amounts involved are growing. During May and June 2018, reports about grand corruption have dominated Kenyan news. This haemorrhaging of public funds will do enormous damage to the country’s already struggling economy. The scourge of corruption in Kenya must be urgently addressed otherwise it could be bringing the economy to its knees. As things stand, Kenya is already struggling to pay its debts. 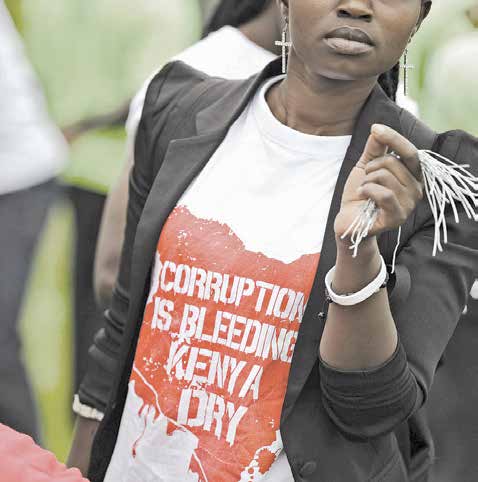 The economic cost of corruption The role of human capital on economic growth has long been established. So, when human capital takes a hit the impact is also felt on economic  development and growth. Let’s take Kenya’s National Youth Service as an example of a public organisation  where corruption is believed to be rife. In 2015, approximately USD$17 million was stolen  from its coffers by a network of companies that supplied goods and service at inflated prices. And this year billions of shillings earmarked for the service were embezzled by a shadowy  network of dubious service providers. This money was all earmarked for youth vocational training. The theft not only jeopardises the country’s short-term skills provision objectives: it also portends irredeemable long-term opportunity costs. Corruption compromises people’s futures and their development. It also costs a fortune. Rampant corruption will drain any economy of the resources needed for projects  like infrastructure development. To illustrate, let’s take a look at the misuse of funds from the Kenya government’s 2014 Eurobond,  which was believed to be Africa’s largest such issuance at the time. Reports indicate that some of the money may not have been deposited into the national Treasury.
In economic parlance, this would qualify as an illicit financial “outflow”: an illegal  cross-border movement of money or capital. The illegal transfer of funds out of African  countries is a recognised constraint on the continent’s economic development because it denies local populations the use of that money for national development. The Global Financial Integrity report estimates that from 2005 to 2014 Africa lost between USD$36 billion and USD$69 billion in illic- it financial flows. This represents about 74% of all financing required (approximately USD$93 billion per year) to develop infrastructure to service Africa’s growth needs. In Kenya’s case, the Eurobond swindle was more than just a missed opportunity to expand the country’s inadequate and dilapidated infra- structure. It also led to a sovereign rating  downgrade on the basis of its increasing inability to service ballooning public debt. A sovereign rating is a mea- sure of a country’s creditworthiness. And a downgrade
signals that the country has not optimally invested money borrowed on capital projects, such as infrastructure. Capital projects typically increase national income and better a country’s ability to repay its debts.

Kenya’s legal system must make corruption expensive and unattractive for perpetrators by the imposition of stiff fines, and mandatory jail sentences

Given these observations, what measures can Kenya take to stem the debilitating  theft of public resources?First, a national ethos that inculcates the value of work as the only means to wealth accumulation must be built. A possible way of achieving this is for education policy makers to emphasize social ethics as a compulsory subject right from
primary school all the way up to the university. Second, Kenya’s legal system must make corruption expensive and unattractive for perpetrators by the imposition of stiff fines, and mandatory jail sentences. Another step in the right direction would be to grant both the auditor general and the ethics and anti-corruption commission prosecutorial powers. Third, the law could be reviewed to ensure that those convicted of economic crimes suffer lasting embarrassment and the greatest possible financial loss. To achieve this, all the proceeds from corruption must be repossessed by the state and channeled back to public use. Convicts would then be barred from holding public office or doing business for several years after their release. Fourth, strict standards of ethical conduct could be imposed for any- one seeking public office. This would entail full disclosure on the sources of campaign funds, public declarations of wealth and lifestyle audits, and enforcement of voter bribery legislation. Fifth, the national fight against poverty, ignorance and disease must be intensified to improve quality of life, and empower citizens to perform their civic duties, such as the choice of legislative representatives, in a more meaningful way. Finally, it would be worthwhile for the national public prosecutor to sign treaties
with “tax haven” countries to block or repatriate illicit financial outflows from Kenya.

PrevPreviousWhy awareness is critical in the fight against illicit trade.
NextCEOs must face uncertainty and tackle it head-onNext