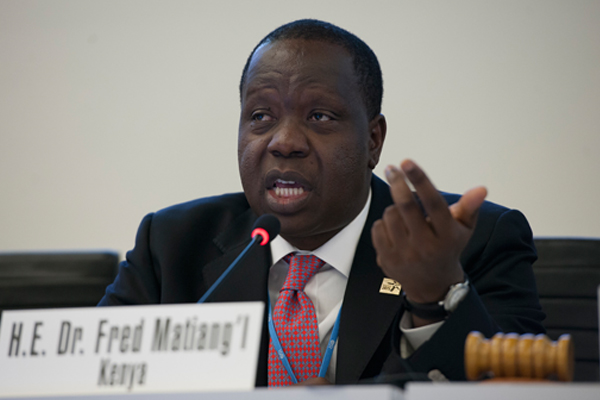 CS Fred Matiang’i’s rise in the public sector started in 2013 when President Uhuru Kenyatta, keen on accelerating the digital transformation kick-started by former President Kibaki, tapped him from academia to head the ICT ministry.

Over the past eight years, Dr. Fred Matiang’i has built an enviable career in public service, earning a reputation as a daring, transformative and reformist leader. The Cabinet Secretary for Interior & Coordination of National Government is a man admired and envied in equal measure, depending on which side of the political spectrum one holds.

To the President and his colleagues in the cabinet, Dr. Matiang’i is a trusted advisor and industrious lieutenant who has not only streamlined service delivery in government, but also spearheaded transformative reforms in key sectors such as ICT, Lands, Education, Regional Administration, Immigration Services, Internal Security, and lately, co-ordination of the governments development agenda. To rogue elements within and outside the government, he is a feared operator who has dismantled cartels and brought to bear the full might of the government on the fight against inefficiency, ineffectiveness, service lethargy, crime and corruption.

For all the diverging views on Dr. Matiang’i, the common link is that he is unanimously viewed as the single most defining figure in President Kenyatta’s administration. Westlands Member of Parliament, Tim Wanyonyi, summarized it aptly in a press article reviewed by Business Monthly: “Matiang’i is among, if not, the best performing Cabinet Secretaries (CSs). If you asked anyone on the streets out there to name for you the 22 members of the current Cabinet, the first one will be Matiang’i and maybe only one or two others.”

CS Matiang’i’s rise in the public sector started in 2013 when President Uhuru Kenyatta, keen on accelerating the digital transformation kick-started by former President Kibaki, tapped him from academia to head the ICT ministry. Unlike most cabinet appointees, the former literature lecturer at the University of Nairobi and Egerton University had not held prior roles in elective politics or the public service. This quickly worked to his advantage. He had no prior baggage, constituents to please or political ambitions to protect, allowing him to give his undivided attention to the task at hand, which at the time was overseeing Kenya’s switch from analogue to digital broadcasting and helping newly elected President Uhuru to start fulfilling his election pledges and the newly acquired political mandate.

The switch-over to digital broadcasting was anything but easy. Planning for digital migration started in 2006 with a deadline for 2015. The migration was a lengthy and costly process, requiring investments from the government, broadcasters, and consumers. It was also a complex process from policy, legal and regulatory perspectives. The new broadcasting licensing framework faced opposition from media stakeholders, who slugged it out all the way to the Supreme Court. While the apex court ruled in favour of the government, litigation had delayed the digital migration process by three years.

In his now signature fashion, CS Matiang’i was able to successfully deliver on key components of this critical process despite the difficult circumstances. This made him a key contributor to the digital dividends we take for granted today, with those now reaping the most having been the biggest digital migration detractors.

Digital migration opened a world of new opportunities in the digital economy. This is because digital broadcasting accommodates more television channels than analogue broadcasting while also using less spectrum bandwidth. The freed-up spectrum bandwidth is what allowed for the rapid deployment of 4G and 4G LTE across the country in recent years, making fast and affordable internet a reality and attracting big ticket investments in the technology startup ecosystem. Kenya today is the leading destination for startup investments in Africa. According to a report by Startup List Africa, Kenya led the way with $266 million in startup investments in 2020, ahead of Nigeria ($237 million), South Africa ($198 million), Egypt ($125 million) and Ghana ($90 million). This underlines the impact of the digital switch over on the economy, and one of the economic benefits of the hands on and focused management style of delivering on public services by CS Dr. Fred Matiang’i.

A lot of thriving internet-based businesses operating in Kenya today-whether in e-commerce, transport and delivery, media or entertainment-owe a great deal of their growth to the digital switch over and the man who laid the groundwork for its successful implementation, Dr. Matiang’i.

CS Matiang’i’s accomplishments at the ICT Ministry quickly caught the eye of the President, who roped him in as acting CS for Lands in 2015 after the exit of Hon. Charity Ngilu (current Kitui Governor). This was one of the earliest signs that the overarching and overachieving CS was quickly transitioning into the President’s “Dr. Fix it,” mode, a somewhat first-among-equals in the cabinet.

CS Matiang’i’s tenure at the Lands and Physical Planning Ministry was as brief as it was equally eventful. He immediately decimated notorious cartels that had entrenched themselves at Ardhi House and set in motion a slew of reforms. He is credited with championing for Kihiu Mwiri settlers in Kakuzi to be issued with long awaited title deeds and was instrumental in laying the groundwork for similar issuances at the Coastal Region and other disputed land cases in the former Central Province.

He also ended the power tiffs often pitting the Lands Ministry against the National Land Commission, ending in stabilizing the Lands ship that impacts so much of personal and corporate business activities.

The trailblazing CS Matiang’i was later appointed as the Cabinet Secretary for Education, Science and Technology in December 2015. His appointment came at a time the education sector was awash with massive leakages in National Examinations.

At the Ministry of Education, Matiang’i effectively dismantled examination cartels that had infiltrated the Kenya National Examinations Council and profited by leaking exam papers to schools and candidates and brought credibility, effectiveness and efficiency in the handling and administering of the National exams, leading to clean results for the first time in many years in 2016. Famously, results from the Kenya Certificate of Secondary Education national examination are now released within a month of their being held.

In June 2017, towards the end of President Kenyatta’s first term, tragedy struck. Major General (Retired) Joseph Nkaissery, the then CS for Interior, passed on, just before the General Elections. The stakes couldn’t have been any higher and, once again, the President turned to the man he trusts with the hardest of tasks. In a somber statement, he announced that, “I take this opportunity this morning to inform Kenyans that there shall be no vacuum in securing our country. I have taken the decision to appoint Dr Matiang’i the acting CS for Internal Security to ensure there is no vacuum”.

Never one to back down from a challenge, CS Matiang’i accepted the appointment and took control of the national security apparatus at a very defining moment in the country’s history. The 2017 elections were hotly contested with cases of months-long protests in opposition strongholds. However, calm and order eventually prevailed. At this point, it was clear in everyone’s mind that CS Matiang’i was the man for the job. Shortly after the election, Dr. Fred Matiang’i was appointed substantively as the CS for Interior and Co-ordination of National Government. The rest is history.

President Uhuru Kenyatta also demonstrated his trust on Dr Matiang’i when he appointed him the chairman of the National Development Implementation and Communication Cabinet Committee, arguably elevating him to a super CS status, a first among equals or as his detractors would want to say, unofficial prime minister.

According to authenticated reports, HE President Uhuru and Dr. Fred Matiang’i first met and developed some rapport when Uhuru was then the leader of Opposition. Matiang’i was by then in charge of the Kenya Parliamentary Support Programme (KPSP) which was financing the parliamentary broadcasting service and digitizing the proceedings. Their friendship blossomed when Uhuru Kenyatta was the Deputy prime minister in the coalition Government.

In year 2013, President Uhuru Kenyatta having seen the potential in Matiang’i, poached him from the position of Eastern Africa Regional Representative for the Center for International Development in the State University of New York (SUNY) and brought him into the government as the CS in the ICT Ministry, where Dr. Matiang’i pushed the unwilling media to adopt the digital migration and ruled out turning back to analogue, as the deadline to digital migration loomed.

A man of all seasons

Before his appointment to the government in 2013, Dr. Matiang’i was the Regional Representative in East Africa for the Centre for International Development, Rockefeller College of Public Affairs and Policy, the State University of New York (SUNY/CID). He previously served as Chief of Party for Kenya’s Parliamentary Strengthening Program where he spearheaded the creation of Parliament’s media center.

Dr. Matiang’i held research and program implementation positions in various civil society organizations in Kenya and conducted research and training for the Commonwealth Parliamentary Association, the World Bank Institute, and the United Nations Development Programme (UNDP) among others. This is besides lecturing at Egerton University and the University of Nairobi.

All through his career, Dr. Matiang’i has proven to be a man of all seasons—adaptable, driven, agile. He also proven to be a pragmatist, favoring actions and results over talk. He’s certainly a public servant worth watching and one who is not easily intimidated or influenced by politics.