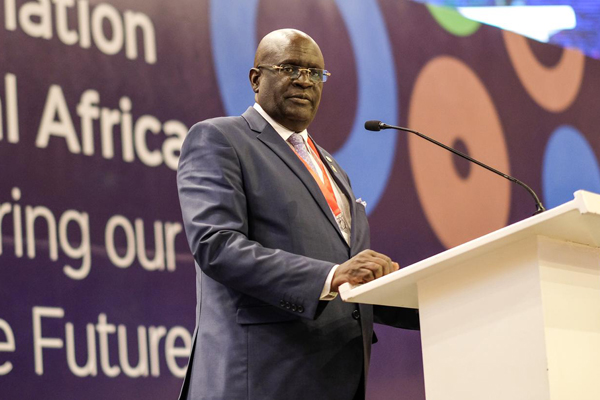 Right from the beginning of his career, Prof. George Magoha has always had the leadership bug. Prior to his appointment to the Education Ministry, his chairmanship at KNEC, and even his role as VC at University of Nairobi, Prof. Magoha served as Chairman of the academic Department of Surgery, and Dean of the Faculty of Medicine.

When Professor George Magoha, a renowned professor of urological and transplant surgery at the University of Nairobi, was appointed Cabinet Secretary for Education in 2019, there was no doubt in anyone’s mind that he was the right man for the job.

The accomplished surgeon cum academic leader had served as the Chairman of the Kenya National Examination Council (KNEC) from 2016 after the then Education CS, Dr. Fred Matiang’i, sent the former KNEC leadership home in the wake of bungled national examinations. At KNEC, Professor Magoha quickly established a reputation for being a no-nonsense administrator, accelerating the reforms set into motion by the then Education CS Dr. Matiang’i. This involved dismantling the cartels that had propagated widespread exam cheating for years, a task that earned him many enemies but that also secured him the support and admiration of most Kenyans, thousands of whom had grown tired of the entrenched examination malpractices. Thanks to the enhanced measures his team adopted in curbing cheating in examinations, Kenya delivered clean results for the first time in many years in 2016—a trend that has been maintained since then.

Not the first time

This was not the first time that Professor Magoha was successfully spearheading reforms in areas where so many had failed. At the University of Nairobi (UoN), where he served as Vice Chancellor (VC) between 2005 and 2015, he restored the prestige of the institution, which had been run down due to financial impropriety, academic malaise, student indiscipline concurrent with frequent riots, and general lethargy and absenteeism among the staff. Prof. Magoha is the first VC of a public university to be recruited competitively in Kenya, by a public university council that equally boasted the first independently head-hunted chancellor who is not the seating President of the country.

With a concise and clinical approach that is typical of a top and globally respected surgeon, Prof. George Magoha led a team that drafted the university’s first strategic plan in over 50 years, creating a renewed sense of accountability in the management and staffing of the institution. He also introduced an open-door policy for managing students’ grievances, enabling him to engage aggrieved students directly and defuse tensions before they blew over into riots. For the entire decade that he served as the vice chancellor, the students never engaged in untoward violent actions.

Prof. Magoha is also credited with the implementation of a financial and management information system that revolutionized the management of the university, leading to efficiencies and effectiveness of processes. With the support of a professional university council appointed purely on merit and led by Dr. Joe Wanjui, Prof. Magoha reorganized the finance department, appointed new managers, introduced performance contracting, secured ISO certification, and instilled fiscal discipline. The results were undeniably positive: the university made significant savings, improved fees collection and enhanced efficiencies. In quantitative terms, the university’s asset portfolio grew from Sh20 billion in 2004 to Sh102 billion in 2014 when his term was grinding to a halt, his legacy captured by the building of a modern multi-storey administrative block and modern lecture rooms.

While at the helm of the UoN, Prof. Magoha stepped up fundraising for the university, leveraging on his expansive local and international network, to raise the much-needed funds.

Prof. Magoha’s rise to the helm of the Education Ministry is the culmination of a distinguished career in academic administration.  In his memoir, George Magoha: Tower of Transformational Leadership, the widely published scholar attributes his ‘rising star’ to the selfless nature of undertaking what most would see as ‘lowly’ duties. A press article reviewed by Business Monthly notes that at one point as VC of University of Nairobi, Prof. Magoha personally supervised the installation of a burglar proof grill at the Department of Surgery. This is not different from the Prof. Magoha we have come to know as CS for education—a man who makes impromptu visits to schools in far-flung regions to inspect on the quality-of-service delivery and conditions of the educational infrastructures in those remote parts of the country.

It is often said that good leadership is seen in times of crisis. Prof. Magoha embodies this truism. Following the Covid-19 pandemic and the disruption of the school calendar, the CS has been a regular fixture in the national press where he has routinely offered guidance on the phased reopening of schools, re-configuration of class rooms to meet the Covid-19 protective protocols and re-scheduling of national examinations.

Thanks to his leadership, schools reopened successfully in January after nine months of closure, national exams have been done and credible examination results released on time, in keeping with the standards he set in 2016, with zero incidents of leakage and the very minimum cases of cheating.

Prof. Magoha’s visible leadership has been highly reassuring for many parents who feared that their children’s learning would stop amid the cloud of uncertainty brought about by the Covid-19 pandemic. He has been very emphatic on schools’ adherence to health guidelines aimed at curbing the spread of Covid-19 virus, SAR’s CoV 2.

Away from the Covid-19 Pandemic, Prof. Magoha has also been managing another herculean task—implementing the Competency Based Curriculum (CBC). Under the CBC model of education, children are expected to spend two years in pre-primary, six years in primary and six years in secondary school. Those who proceed to university study for three years while those who join certificate, diploma and technical courses study for varied periods depending on the programme. This is in contrast to the 8-4-4 system which prescribes eight years in primary, four in secondary and four in university. Importantly, CBC places more emphasis on the development of skills learning by doing, as opposed to 8-4-4, which has earned the reputation of teaching learners to cram exam questions instead of applying the subject matter in real-life situations. The fruits of CBC will take years to mature and there will be many learnings along the way. That said, Prof. Magoha and his team are doing a critical job edging in sand the foot prints of its foundation today.

“When I was sworn in as Cabinet Secretary for Education on March 26, 2019, my first engagement at the Ministry of Education was to physically confirm whether Ministry employees report to work at the expected time. I immediately realized that more that 60% of the offices were empty and unattended by 11am. I then sought to rally the staff and firmly impressed upon them the importance of reporting for duty on time. To monitor attendance of staff to their duties, I spearheaded the installation of CCTV and biometric devices in all entry and exit points for checking in and out all Ministry personnel. Though it was initially resisted, within a span of 6 months, cases of absenteeism had reduced to almost zero with nearly all top managers reporting for duty voluntarily by 6:30am, a situation which has remained the same to date.”—CS Magoha in a public statement issued in 2020 on the status of the education sector.

Right from the beginning of his career, Prof. George Magoha has always had the leadership bug.  Prior to his appointment to the Education Ministry, his chairmanship at KNEC, and even his role as VC at University of Nairobi, Prof. Magoha served as Chairman of the academic Department of Surgery, and Dean of the Faculty of Medicine.

Prof. Magoha served as President Association of Medical Councils of Africa for five years between 2013 and 2018. This is in addition to having served for an exceptionally long period of time as Chairman Kenya Medical Practitioners and Dentists Board.

An alumnus of Starehe Boys Centre and Strathmore College, where he completed his O and A-Level education respectively, Prof. Magoha was awarded a scholarship to study human medicine at the University of Lagos, in Nigeria. His studies took him through the Lagos University Teaching Hospital, the University College Hospital, Ibadan, both in Nigeria and the Royal Postgraduate Medical School, in United Kingdom. He is trained as a specialized urologist (Royal College of Surgeons) and is a Fellow of the Royal College of Ireland. He also an alumnus of the Graduate School of Business at Stanford University, where he studied executive management.

Prof. George Magoha is a professor of Urology at the School of Medicine of the University of Nairobi.