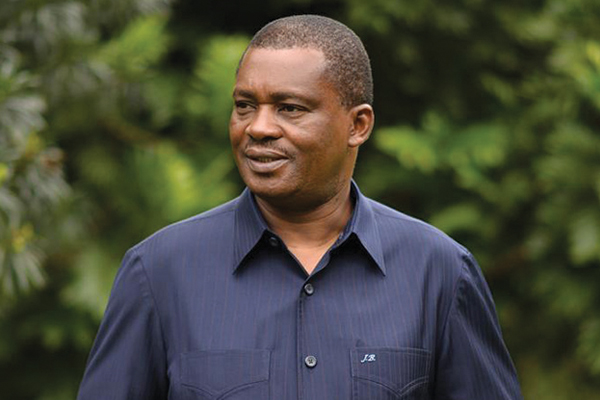 In the last eight years, 220 laws were enacted under Hon. Justin Muturi’s leadership. As the first Speaker under the Constitution of Kenya 2010, he presided over the overhaul of the country’s laws, including some, in the statute books since the colonial period.

SPEAKER OF THE NATIONAL ASSEMBLY OF KENYA

Justin Bedan (JB) Muturi is the conductor of Kenya’s legislative orchestra. From his perch, he powerfully drives a business-friendly agenda, skillfully negotiating the contours of politics as the Parliament he leads makes laws and regulations to create a stable business environment and better livelihoods for Kenyans. Does he want to succeed President Kenyatta? He spoke to Business Monthlyin May 2021.

That afternoon on March 28, 2013, Justin Bedan Muturi—fondly referred to by many as JB, nibbled on his lunch in one of the rooms at Parliament buildings, his eyes firmly fixed on the screen tallying the votes of Speaker. He had campaigned, lobbied, and prayed. Now it was up to the Members of the National Assembly to choose their Speaker. His challenger, the then Speaker Kenneth Marende, the umpire of the Tenth Parliament, was also in the race. The numbers trickled in, the computers whirred and when the final tally was announced, after two rounds of voting, Muturi was elected with 219 votes against Marende’s 129. That day marked the beginning of his role at the helm of the National Assembly and as the chairman of the Parliamentary Service Commission (PSC).

But it is what he said next that defined his focus, his vision for the place of Parliament in building the nation, boosting investments, growing the economy and changing livelihoods. His priority, he said, was on passage of governance laws, laws to boost the economy and position Kenya competitively in the global market.

“In my view (what) is most crucial and urgent, is the passage of the laws that will set the pace for the sustained economic growth and development of our beloved country,” .

For a country known for having stellar economic plans, a progressive constitution and dozens of business-enabling laws, Muturi’s sentiments could have sounded ambitious, even far-fetched.

“We were dealing with multiple administrative issues to settle the new MPs in an expanded House, nearly twice the size of the previous Parliament, and at the same time, we did not want to lose focus about the fact that we exist to serve the people, to improve their lives, and livelihoods. Boosting investments and growing the economy sustainably top that agenda,” Muturi said in an interview with Business Monthly for this story.

He is a man who was aware of the new reality about the place of Parliament in Kenya’s political architecture. The Constitution changed in 2010 giving Parliament immense sway in making the national budget, approving debt ceilings and in oversight of the Executive’s roles.  The system too has changed to a majoritarian presidential system, meaning that the party in power had a majority in Parliament, making it inevitable for the Legislature and the Executive to work together in lockstep.

To understand Muturi’s passion, one needs to look at his history. Born in a remote village in Kanyuambora, Mbeere, in Embu County on April 28, 1956, JB is the son of a policeman and a hardworking housewife. Muturi has defied all odds to get to where he is today, the head of the Legislature and the third-in-command in the constitutional pecking order.

His father died while Muturi was at Kangaru School in Embu, but he slogged on. With the goodwill villagers and his hardworking mother (who died in 2018), he made it to the University of Nairobi, where he studied law, and upon graduation, he was picked as a magistrate serving in different parts of the country, in Bungoma, Githunguri, Thika, Machakos, and Nairobi. He quit the Judiciary to try his hand at politics, and after losing in the 1997 general election, he won the Siakago parliamentary seat in 1999 by-election. In between, he was a businessman, in the space of clearing and forwarding, transport and dubbing with poultry farming.

JB was re-elected on the Kanu ticket in 2002, and became the party’s powerful chief whip and one of the most effective chairpersons of the Public Investments Committee (PIC) in the history of the house. During this period, JB distinguished himself as a gallant crusader in unmasking runaway corruption particularly in state owned enterprises (SOEs).

As a former magistrate, he had witnessed the suffering of the people first-hand, in land cases, unfair business practices, auctions which consigned many families to poverty and other predatory attacks perpetrated by the sharks in the country. As a politician, long before the Constituency Development Fund was activated in 2005, he set up infrastructure in the constituency to help the needy, paying their school fees and medical bills, as he begged the government of the day to build roads, schools and hospitals.

Now as the Speaker, his vision was very clear about what the country needed to work on: education, health, the economy and good governance. “As Speaker, I don’t have a vote in the House. But I try my best to explain to Members that we need to fix the healthcare, the economy, the education and how we run the affairs of this country,” Muturi told Business Monthly.

“It should not be acceptable that families get bankrupted while treating their sick, or that we are always scrambling with hospital bills. Covid-19 has disrupted our way of doing things, and we must take these lessons and recalibrate our thinking and priorities accordingly,” he added.

As the first Speaker of the National Assembly in the new bicameral arrangement, Muturi was coming in from the cold after five years of being outside Parliament working in the civil society, rebuilding the country’s democracy as the chairman of the Centre for Multiparty Democracy (CMD). Now, he is back in the ring, in a very important position, expected to address the bread-and-butter issues, directly affecting the 349 MPs in the National Assembly and the 67 MPs in the Senate, and indirectly, all the 48 million Kenyans.

The party in power had a manifesto, with policies and pledges to build a first-class logistics hub covering transport, roads, railways, waterways, pipelines, ports, storage and energy in Kenya. To modernise agriculture and end the perennial cyclic hunger. To boost manufacturing and diversify exports. To clean up and simplify the procurement bottlenecks. To make tax collection more efficient. To deepen relationships with Ethiopia, Tanzania, Uganda, Somalia, South Sudan, and other regional countries, who depend on Kenya for goods and services, and whose exports feed our country. And to create a business climate that encourages innovation, investment and growth. Overall, the goal was to make life affordable and improve the quality of life for the Kenyan citizen, by making food, housing, energy and transport easier to access.

So, when the Executive asks for money, including permission to borrow colossal amounts, to implement life-changing projects in food security, infrastructure, electricity distribution to build the foundation for a prosperous country, Parliament acquiesces. “It is a shame that some of the projects were not executed as envisaged due to corruption and other issues, but as Parliament, we continue to hold the Executive to account on behalf of the people of Kenya,” he said.

For the last nine years, Muturi has been engaging the media and the private sector on how Parliament can help them to do their job effectively. Every year, he invites journalists and the Kenya Private Sector Alliance (KEPSA) to discuss different issues on governance, on business, on the economy, and how Parliament can help with that. “We have to remember why we do our politics. We do not do it for ourselves. The people who elect us, expect us to come up with policies, laws and tangible results that improve the quality of their lives,” said Muturi.

Auditing the performance of the 11th Parliament, between 2013 and 2017, the tally of laws that the House passed is impressive. For example, the Companies Act was revamped to a new law that made it easier for entities to efficiently set up and operate in Kenya. The overhaul of the law was done incorporating the changes in technology, procedure, and corporate governance principles, and partly in response to the Ease of Doing Business requirements which boosted Kenya’s rankings. Dozens of laws that support business have been enacted during Muturi’s tenure, including the Insolvency Act, the Mining Act, The Public Audit Act, the Public Procurement and Asset Disposal Act. In the last eight years, 220 laws were enacted under Hon. Muturi’s leadership. As the first Speaker under the Constitution of Kenya 2010, he presided over the overhaul of the country’s laws, including some, in the statute books since the colonial period.

What next for him? There have been reports that he is seeking the highest office in the land, which will make him the first Speaker to have the courage to do so in Kenya. You can see it in his demeanour, the events he attends, the people he meets, and his recent public pronouncements. Not too long ago, JB was crowned Mt Kenya East spokesperson. And newspaper headlines these days have him as a possible running mate, or president, in the 2022 government. On being prodded on his next political move, JB retorted, “Mwenye macho haambiwi tazama,” as he chuckled away. He, however, promised to respond comprehensively to the question “when the time comes”.

“Right now, I have a job to do and jointly, we have plenty of issues we are trying to do as the Legislature. The time for politics will come, and I assure you, that I am not one to shy away from challenges,” he quipped, tongue in cheek.

That a lot more has been done under his stewardship of the National Assembly and even more is expected of him to influence the business environment, the jury is out. Watch this space.