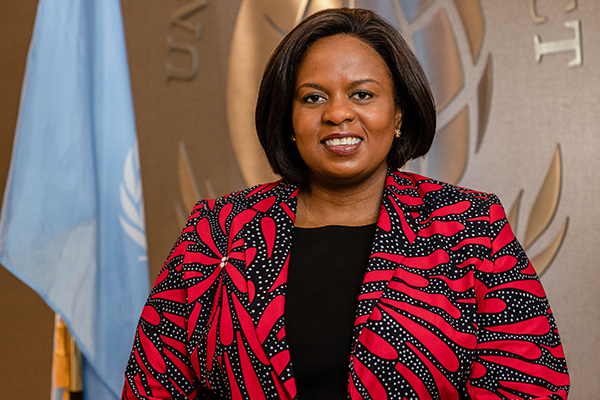 Sanda Ojiambo is the CEO and Executive Director of the United Nations Global Compact, a special initiative of the UN.

Sanda Ojiambo would describe herself as a business leader with a unique blend of sustainable business and sustainable development expertise, brought to life through experience garnered in the NGO sector, the private sector and the United Nations.   She is the CEO and Executive Director of the United Nations Global Compact, a special initiative of the UN, which was founded in 2000 by the then Secretary General, Kofi Annan.

The United Nations Global Compact is the world’s largest corporate sustainability initiative aimed at mobilizing business around responsible business practice and principles, and contributions towards the UN Sustainable Development Goals (SDGs).  Sanda took up the role as CEO and Executive Director just over a year ago; and amidst the Covid-19 pandemic.

The announcement of the role, which came through the office of the Secretary General of the United Nations, necessitated Sanda’s exit from Safaricom Plc, where she had worked for twelve years, leading the company’s much lauded efforts in Sustainable Business, Technology for Development and Corporate Social Investment.

With a Master’s degree in Public Policy, Sanda’s first job with the UN in the very early stages of her career was with UNDP-Somalia, part of a four-year stint in Somalia which shaped Sanda’s views on development, development policy and sustainability.  It was the start of her career, but she knew then that she would go back to the UN at some point.

And so, amidst the work from home environment, Sanda took on the new role in early June, 2020 working from Nairobi while using technology to temporarily bridge the gap between her team in New York and other colleagues in duty stations.  The new role posed extreme demands for time and across time zones with the boom in webinars and video conferencing because the Covid-19 Pandemic had arrived and people were actively convening online.

Her appointment meant that ultimately, she would have to shift base, leaving Nairobi to start a new phase of an illustrious career in New York, New York, US. The Covid-19 Pandemic meant that she had to get things going while grounded in Nairobi.

She had to tap deep into her mental strength, her deep sense of determination and optimism to make a smooth and successful transition.  And when the Covid-19 Pandemic fog had lifted a little and restrictions on international travel were lifted in September 2020, she got on the first available flight to NY, US.

Sanda reminisced in a recent LinkedIn post, “The trip from Nairobi to New York remains extremely vivid,” she says. “There was a distinct sense of trepidation among the small group of travelers, and very little could have prepared me for the full realities of life with the Covid-19 Pandemic restrictions that were in place in New York City.” Sanda further elaborated on the importance of maintaining a healthy work-life balance when working from home as being key to personal and professional equilibrium, growth and successes during these unique times.

Although she landed successfully in her new home, an apartment, she still could not go to her new office, and so had to set up an office at home.  With a seat at the window, she has watched as the New York seasons changed from fall to winter and then to spring.

One of Sanda’s first achievements in office was to establish a new, forward looking strategy for the Global Compact, charting forward a new trajectory towards heighted accountability measures for companies, global growth, prioritized areas for action, and a new strategy to engage Small and Medium Enterprises (SMEs), which are a significant cog in the global economy.  The strategy has been well received globally and with several stakeholders, setting the tone for the new chapter for the Global Compact under Sanda’s leadership.

“SMEs drive 70 per cent of the world’s economy and are a fundamental part of the supply chain of large businesses. You are only as strong as your weakest link. A company cannot be responsible if its supply chain is not sustainable,” says Sanda.

While large businesses are good because of the agenda-setting role they play on a national or global scale, drive innovation and help in positioning, it is important to remember that they are supported by SMEs.

Looking forward to the future, Sanda sees the role of purpose and principle led business as one that more businesses can and should adopt, so that they continue to deliver both profits as well as benefits for societal transformation, using the business lens and the platforms of the UN Global Compact.

Sanda’s Masters of Science (MSc) degree in Public Policy and Development Economics, from the University of Minnesota-Twin Cities (US) has been complemented by various executive education courses between 2012 and 2016 that she took at the prestigious Strathmore Business School (SBS) and a Women in Leadership Forum from the Harvard Business School Executive Education in 2015.

Her foundation in Education was laid at McGill University between 1992 and 1995 where Sanda graduated with a Bachelor of Arts (BA) degree in Economics and International Development. Like most of the leaders being honoured here, Sanda Ojiambo attended the St. Mary’s School, Nairobi for her International Baccalaureate between 1990 and 1991.