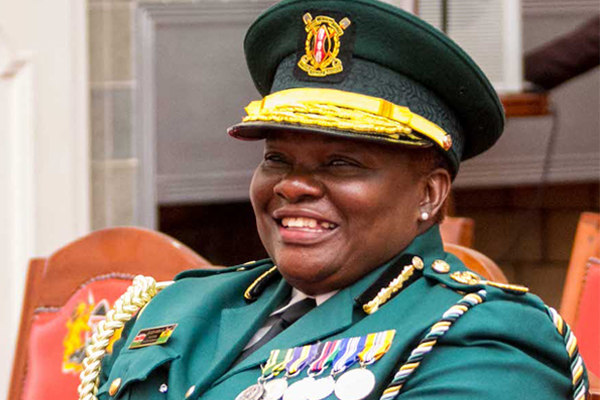 Matilda Sakwa was appointed NYS acting Director General in mid-2018. A consummate career administrator and a team player, she was (betrayed) by her exceptional skills in management and coordination of public affairs, public policy formulation, networking and resource mobilization horned during her tenure in field administration and central government.

Matilda Sakwa began her career in June, 1989 as a District Officer. She had just graduated with a Bachelor of Arts Degree in Sociology from the University of Nairobi. Matilda recounts that she was only 25 and did not have the imposing body frame that her subjects expected of a District Officer then. It did not help matters that she was entering a male dominated segment of the civil service.

She nonetheless took her responsibilities with gusto and realizing that she was not physically endowed on account of her age, she summoned and solely relied on her fledgling leadership and administrative skills to deliver on her targets.

To shore her mettle, Matilda then took time off to study and earned her Master’s Degree in Development Studies from the Institute of Social Studies at The Hague, The Netherlands in 1999.

As a District officer, she chaired and participated in various committees whose membership was largely composed of people the age of her parents. She participated in developing the District Development Plan, held public barazas to propagate government policies and programmes, coordinated all government development activities in the Division and deputized the District Commissioner from time to time. She made far reaching decisions for and on behalf of the government.

After twelve years in field administration, and due to her impressive track record, she was elevated to the position of Under Secretary, where she headed the Aids Control Unit in the then Ministry of Provincial Administration and Internal Security.  While there, she coordinated the implementation of the Kenya National HIV/AIDs Strategic Plan, developed plans for mainstreaming HIV/AIDs programmes in the ministry, conducted gender and HIV/AIDs advocacy, mobilized and planned utilization of resources from the World Bank funded HIV/AIDs programmes among other key undertakings.

Matilda was a key player in developing structures for the HIV/AIDS control programmes in the public sector in general and in the then larger Office of the President in Particular.

In 2011, she had a brief but fulfilling stint as the Director Social Pillar, Kenya Vision 2030 where she fondly remembers spearheading setting up of Project Delivery Teams in the line ministries that are now active in the delivery of the flagship projects at the National and County levels.

She was tellingly deployed back to the field as a District Commissioner in 2007 when her experience was needed to calm post-election upheavals ravaging the country then, following the disputed general elections. During this time, she was involved in peace building and conflict management, promotion of statehood and nationhood, coordinating different government security agencies to guarantee security of the people and their properties and dissemination of government policies.

Her stellar performance as a District Commissioner would later see her being appointed County Commissioner during the operationalization of counties as both political and administrative units in 2013.  She served in this capacity for five years in Nandi, Elgeyo Marakwet and Machakos counties.

Then came 2018. Two episodes of alleged corruption scandals had hit and besmirched the reputation of the National Youth Service (NYS) in quick succession between 2015 and 2018.  The Service was sinking fast under the weight of public reproach and disdain. The future of many destitute youths enlisted into the NYS was at stake. The once quiet institution had found its name in all imaginable media platforms for all the wrong reasons.

Something had to be done to rescue the NYS and to restore public trust and confidence in its operations. The government went on a treasure hunt to find the ideal person for the rescue. When the hunting expedition was over and the time came to unveil the treasure, it was Ms. Matilda P. Sakwa.

Matilda was appointed NYS acting Director General in mid-2018. A consummate career administrator and a team player, she was (betrayed) by her exceptional skills in management and coordination of public affairs, public policy formulation, networking and resource mobilization horned during her tenure in field administration and central government. Matilda indeed revealed in one of her interviews when she appeared on KBC television in August, 2018 that the appointing authority had narrowed down to three names before she was picked. She was indisputably a cut above the rest of her peers.

Even with these skills, however, being thrust in the middle of the storm that had engulfed NYS required somebody with a rare mettle.  This is where her calm but tough demeanour with a tinge of strictness comes in handy.

Matilda observes that, ‘when I walked into NYS, one of the first things I grappled with was traumatized employees. I found a Service replete with apprehension, confusion and malaise. The senior management who had survived the turbulence remained timid and in shock. All hope had been lost and nothing seemed to be working’.

She hit the ground running. Reading from the script she had been given by the appointing authority and guided by the top leadership at the then Ministry of Public Service, Gender and Youth Affairs, Matilda focussed on introducing basic reforms in a bid to breathe fresh air into the NYS.

She did a quick research and realised that the problems with NYS were deeply rooted in ‘lack of procedures, structures and systems in the procurement and accounts departments. I could not trust anybody because though I knew a majority of staff and stakeholders were good, I was sure there were bad elements who wanted to take advantage of the situation and push us deeper into the abyss. For a long time, I lost my sleep’, she says.

When Matilda swung into action, that saw transfers, signing of new contracts with thoroughly vetted companies, introduction of framework contracts, reshuffles, workshops and retreats, meetings, capacity building and training sessions to lay ground for the envisaged transformation of NYS from a state department to a state corporation. A few months at the apex of NYS and things started looking up. She has managed to convince the staff that the NYS will rise from the ashes. The NYS Act, 2018 was born.

In February, 2019 she received members of the inaugural NYS Council who had been appointed to shepherd the transformation to a body corporate. The Council confirmed her as the substantive Director General/CEO a few months later, cementing her position as the first female Service commander in the history of Kenya. She had scored another first. In just under two years and despite a cut on the NYS budget and the disruptions occasioned by the effects of Covid-19 pandemic, Matilda has distinguished herself as one of the most dependable and transformative CEOs in Kenya today.

Since taking over, Matilda has overseen enlistment of over 35,000 deserving youths across the country into the NYS, constructed more barracks and classrooms in NYS schools and field units, restowed discipline and admitted 200 servicemen and women to undertake medical courses for the first time in the history of NYS.

More importantly, today NYS is a state corporation totally redeemed from its former tarnished image. Expenditures have been devolved, revenue collection has gone up considerably, there are more partnerships and collaborations like never before, new employees are being recruited, servicemen and women allowances are released on time, pending bills have been substantially reduced, all commanding officers across the 22 units have been facilitated with new vehicles, several capacity building and promotional courses have been mounted, members of staff have been motivated through accelerated promotions and complaints have reduced, through the establishment of an efficient complaints resolution process.

Looking back, Matilda opines that her journey to the top has been arduous and challenging yet fulfilling. She admits that being appointed the Director General of NYS had never been in her wildest dreams. Asked how she received the news of her appointment to lead the NYS, she notes that ‘it was a shock to me. At first, I said no to the offer because I hardly knew what I was going into but after thorough consultations with family members and friends, I decided to take the plunge and at the deepest end of the pool.’

Reminded that she may be enjoying a lull before another storm at the NYS, the workaholic CEO retorts that, ‘that is wishful thinking. I do not want NYS to be dragged back into the past and therefore imagining that there is going to be another corruption scandal merely because of the past is a misplaced fallacy I would not want to be associated with. Instead, what people should be concerned with is whether we are delivering on our core mandates of Paramilitary Training and Service Regimentation, National Service, Vocational Training and Commercialization. In my opinion, so far so good’.

A lover of knowledge, Matilda has globe-trotted to better her skills. She attended a Data Modelling workshop at the University of East Anglia, Great Britain, attained a Diploma in Community Based Prevention and Management of HIV/Aids in Israel, participated in a workshop on Integrating Good Governance in Education Curriculum in Africa at Makerere University, and attended a Public Administration and Public Service Reforms Seminar for Kenya officials at Peking University, China. Locally, she attained a Diploma in Public Administration, a Certificate in Senior Management and Strategic Leadership and Management Program from the Kenya School of Government.

Matilda Sakwa singles out Prof. Margaret Kobia, Cabinet Secretary (CS), Ministry of Public Service and Gender whom she fondly refers to as ‘Madam CS’ as her greatest mentor. When she dragged her feet and appeared reluctant to take up the appointment as NYS Director General, Prof. Kobia remained her forte. She constantly urges her on.