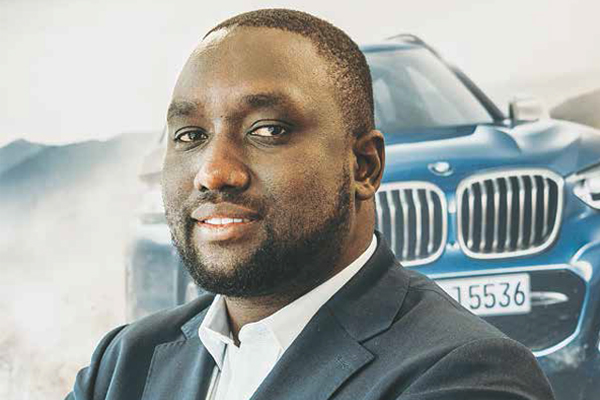 Hussein Ibrahim was head hunted and joined Inchcape Kenya as the MD for Kenya and the Inchcape hub that comprises 7 other East African countries, in charge of Jaguar Land Rover, BMW and BMW Motorrad.

Inchcape plc is an independent, multi- brand, most trusted automotive distributor with operations that span countries on five continents. It is also involved in the retail and services of top car brands. The company is headquartered in London, United Kingdom and has operations in 34 countries across Asia, Australia, Europe, Africa and South America.

In Kenya, Inchcape operates as the official distributor for Jaguar Land Rover and BMW, being a key strategic partner to the world’s foremost premium and luxury car brands for whom Inchcape provides an effective, well-financed and customer focussed route to market for both sales and service for new and used cars and parts.

Looking after the operations of Inchcape Kenya is Hussein Ibrahim, one of the to-go-to contact person for anything premium cars in the country and indeed, the larger Eastern Africa region.

Known to many in the motor industry as one of the few honest and diligent in work ethics, Hussein started his journey of dealing with cars, at the University of Eastern Africa Baraton, where he pursued a Bachelor of Science (BSc) degree in Automotive Engineering between 2003 and 2005, a journey that would see him crossing the Atlantic Ocean to US, to complete his degree between in 2009 at the University of Central Missouri (UCM).

Upon completing studies in the US, Hussein returned to Kenya and joined Subaru Kenya in 2010 as a Car Diagnostic Specialist. He rose through the ranks in after sales focusing in service, parts, and into top management, being among the team that set up Subaru branches and assisting the dealerships across the country. He later was appointed as the General Manager (GM) for Subaru business in Uganda to lead brand growth in that region.

In 2016, Hussein joined Toyotsu Automart, a Toyota Corporation subsidiary, as the vehicles procurement manager. Toyotsu is a top-end preowned car dealer in the country. His role involved sourcing of quality cars, a job that he did so well and put pre-owned cars at Toyotsu into the map as the go to place for certified used cars. Hussein was part of the team that set up standards for the trade-in process that involves car valuation, preparation and refurbishment, a process that Toyota uses to-date.

Hussein Ibrahim was so good at his job, understood the technical and commercial aspects of the job, leading to his appointment as the Sales and Marketing manager for this Toyota subsidiary, sustaining strong sales volumes until his departure in 2018.

Having gained experience in the technical and sales aspect of automotive, he left Toyotsu and returned Subaru Kenya as the regional manager for Subaru operations in Kenya, Uganda and Tanzania, with responsibilities for the entire group, and Oriel Ltd – a leader and specialist in vehicle suspension systems.

Hussein was head hunted and joined Inchcape Kenya as the MD for Kenya and the Inchcape hub that comprises 7 other East African countries, in charge of Jaguar Land Rover, BMW and BMW Motorrad.

Inchcape Kenya has also won an award for ‘Best Customer Service’ in the region by Jaguar Land Rover. According to Hussein, ‘With premium products that we sell at Inchcape Kenya, customer service is of utmost importance, to ensure excellent experiences at the dealership and with their cars’.

Already under his leadership, Inchcape Kenya recorded the highest sales of accessories in sub-Saharan Africa region last year. Hussein oversaw the set-up of the BMW state of the art showroom at One Africa and state of the art service workshop at Delta Tower Annex in Westlands.

As an additional business stream, Hussein also acquired the BMW Motorrad brand from the previous retailer. Hussein’s passion in the current job, is looking after some of the most luxurious brands in Kenya, featuring breakthrough technologies that are coming into the automotive space. Both Jaguar Land Rover and BMW have invested a lot in Research and Development (R&D) into electric cars. The Jaguar i-Pace and BMW i3 are already causing a stir of anticipation in the Kenya market.

Jaguar Land Rover recently announced that in 2025, they will transition into exclusively producing only full-electric cars. Some of the current JLR models are semi hybrid as the brand prepares to transition. Asked if Kenya is prepared for this change, Hussein says that Inchcape Kenya is already exploring ways in which they will support the customers in the transition, with a choice between car + charging equipment and convenient charging points in Westlands at the Inchcape premise.

Turning to the challenges, Hussein cites value perception for brand new cars in Kenya. He says, ‘When customers discuss pricing, they are not comparing like for like. Some of the advantages of buying a brand-new car is that the car comes with a warranty. In this day and age where the technology in some of the cars is quite advanced, the customers should not go back to his/her pocket to pay for required periodic system upgrades and maintenance, which are only available at the official dealer’.

‘The importance of servicing at the dealer is another major, safety and ultimate cost advantage. We cannot over-emphasize on the need to use only genuine parts on your car, in addition to the availability of highly trained technicians at the dealers, who are also up to date with their skills and emerging technology. Most customers who take shortcuts in maintaining their vehicles end up coming to the dealer when the car has serious issues, this usually translates to rather large repair bills. On most occasions this will be the first interaction they have with the dealership and this subsequently creates the wrong perception. This is like coming for a heart surgery when all you needed was going for regular check-ups, which is definitely cheaper than the compulsory heart surgery at that point in time,’ adds Hussein.

This wrong perception is however changing, as customers who prefer new cars are now more exposed, tech savvy, and with all information they need readily available on their smart phones, says Hussein. For future and despite of the challenges posed by the COVID-19 Pandemic, Hussein sees a surge of more Land Rover Defenders on the road.

BMW Motorrad is also back on the Kenyan map as the luxury motorcycle of choice. Inchcape Kenya is the sales and aftersales support provider for this brand. Already, the roads are awash with the Motorrad F 750 GS and F 850 GS and the big bad boy of them all, the R 1250 GS/A. On the smaller side, Inchcape Kenya also stocks the G 310 R and the C 400 X.

Amongst the bikes available on special order is the heritage R 18 and R 18 Classic, with the highgrade Option 719 parts which bring a unique look to your motorcycle, offering increased customization, specialised seats, wheels, and cylinder head covers to striking paint options, perhaps for a most interesting finish.

Among the unique offering in the automotive segment in Kenya is Lease and Rental, where businesses especially hotels and tour companies can lease luxury brands for their clients. Organisations can also lease instead of buying vehicles as assets. Inchcape Kenya can also source and supply certified pre-owned Jaguar Land Rover and BMW cars.

Customers out there are frustrated after buying these brands from unknown sources which ends costing them more eventually. Buying from Inchcape Kenya guarantees the customers top quality cars, with warranty and aftersales service at fair prices.

At the moment, Hussein is working on other unique automotive offerings that will be beneficial to all BMW and Jaguar Land Rover owners including the ones with preowned units. The causes Hussein cares most about include empowering future engineers through education, poverty alleviation, science and technology.