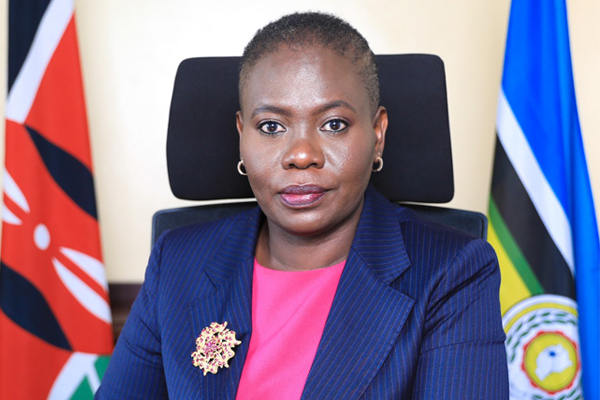 Through timely and personalized media engagements in print and broadcast mainstream platforms, CS Farida Karoney is moving with speed to ensure that all stakeholders are familiar with the new system, including the nuances and benefits accruing from these reforms dovetailed with new legal instruments.

Of all the Cabinet appointees in President Uhuru Kenyatta’s second term as Head of State, none was a more surprising choice than Farida Karoney, the Cabinet Secretary for Lands and Physical Planning. With no prior experience in public office or electoral politics, she was in 2018 plucked from the private sector to lead a ministry known for its political undertones and long-running disputes, including everything that goes askew with political careers or businesses deal gone sour.

Less than five years later, the veteran broadcast journalist has successfully navigated the murky waters that is the Lands Ministry, including political intrigues and economic challenges that come with running this highly charged and emotive but equally very important and most sensitive docket. CS Farida Karoney has managed to delivered on key initiatives, including spearheading the digitization of land records, leading to the reissuance of new land titles and deeds, accompanied by important administrative and legislative reforms.

The switch to digitized lands records is expected to be completed in 2022, representing an important milestone considering initial plans for digitization were mooted in the sunset years of retired President Mwai Kibaki. The most notable and indeed historical, is the National Land Information System (NLIS) dubbed “Ardhisasa,” which enables users to initiate transactions such as official searches, transfer of property and payment of annual land rates online without having to visit lands offices.

The Ministry of Lands and Physical Planning reports that 240,000 Nairobi County land parcels have already been uploaded in the first phase. Records for 20 other counties will be uploaded by December this year, and the rest by the end of 2022, a momentous task executed with precision, effectively, efficiently, behind the scenes and delivered on time by a first time Cabinet member.

Besides reducing transaction times and promoting efficiency, the new digital service is also expected to seal loopholes in the land registration and transfer process, rooting out the endemic systemic fraud and corruption that have long dogged land transactions in independent Kenya. Likewise, the improved and fast-tracked land interface service will enhance revenue collection by sealing loopholes that have facilitated revenue leakages and outright theft. Landowners will have no room to dodge payment of due taxes as the system will be linked to external service providers including the Kenya Revenue Authority (KRA), the National Lands Commission, commercial banks, and other key institutions involved in land matters.

Through timely and personalized media engagements in print and broadcast mainstream platforms, CS Farida Karoney is moving with speed to ensure that all stakeholders are familiar with the new system, including the nuances and benefits accruing from these reforms dovetailed with new legal instruments. As an example, the Ministry in April organized an online training session on navigating the Ardhisasa Platform for the membership of the Law Society of Kenya (LSK) in Nairobi. About 1000 lawyers joined the technical training session.

As at the end of April, 2021, more than 11,000 users had already registered on the platform, with the number expected to grow steadily as the rollout gains pace across the country and the minor bugs and teething problems are cleaned out.

To be at the epicenter of this transformation – as is the case with CS Karoney – is no mean feat. Land transactions are not only politically sensitive, but they also have the potential to derail economic development of the country and hold of investments all together, if poorly managed. This has historically been the case in infrastructure development, where wheeler dealers have pushed the cost of land acquisition through the roof by unscrupulously acquiring land in areas targeted for infrastructure development before reselling it to the government at obscenely high prices – sometimes more than ten-fold despite no meaningful improvement or development on the land to warrant such a steep increase in valuation. In a digitized era, this practice will be nipped in the bud, representing multiple benefits for the government and ordinary Kenyans, who can now easily get titles and monetize their land holdings by using them as collateral when accessing credit from the commercial banks. Achieving digitization of Land records is a fulfilment of CS Karoney’s declaration of, ‘commitment to enhancing the quality of human life by providing quality and humane service, as espoused in her LinkedIn profile.

Prior to her appointment to the Lands and Physical Planning Ministry, CS Karoney was the Chief Operating Officer of Royal Media Services (RMS), the leading media conglomerate in East and Central Africa, comprising over tens of radio and television stations traversing the entire fabric of the country between 2014 and 2018 and before then, was the Group Editorial Director from 2009 to 2014.

During her time with RMS, she was a key member of a management team that helped the broadcaster grow its market share to become the dominant player in radio and TV. For instance, Data from Kenya Audience Research Foundation shows that Citizen TV, the RMS flagship TV channel, commanded a market share of about 22% in 2019. All its closest competitors – including KTN, NTV, K24 and others – had a market share of less than 10% each in the same period, underlining the brand leadership that Citizen TV has built over the years; thanks in no small part to the contributions of CS Karoney, working under the wings of Group CEO Wachira Waruru and under the umbrella of media mogul and human rights crusader, Dr. S.K. Macharia, who is the substantial shareholder of the RMS Group.

CS Farida Karoney has also held senior roles at the Standard Media Group-owned KTN, where she served in different roles as Assistant Director for Broadcasting and Head of Editorial between 2007 and 2008. This is in addition to serving at the media house as Managing Editor between 2004 and 2006 and as a correspondent, reporter, senior reporter, and features editor. CS Farida Karoney also worked as a freelancer for Radio France Internationale and Aljazeera English as a Freelance Producer in 2007. She is, for all intents and purposes, a media insider, quality that endeared her to many leading politicians and technocrats in the government, who always sought her advise on strategies of handling media and framing news content.

It is often said that to know a leader, speak to their followers. Those who worked with CS Karoney have positive things to say about her. Popular Citizen TV journalist, Lilian Muli, is one example. “Wide eyed…24 years old and I was given an opportunity to stand with media giants and report and anchor the news with them at KTN, my first employer. The one person who believed in me was Lands CS Farida Karoney who was then the Managing Editor at KTN.  To everyone else, I was too young or too this and that,” said Lilian Muli in an Instagram post celebrating the Lands and Physical Planning CS’s cabinet appointment.

Prepared for the job

In many ways, CS Karoney’s media career prepared her for the Lands and Physical Planning CS job. For, one, the media, too, is politically sensitive. This was particularly true in the 2007 and 2008 period when CS Karoney held senior roles in KTN. At the time, the media was under immense pressure to balance its mandate of informing Kenyans with the responsibility to safeguard national security following the devastating post electoral violence (PEV) that engulfed Kenya. It was not an easy time to be a decision maker in the newsroom at that time and more so, in broadcast media, that showed real happenings, in real time.

Likewise, the media industry has undergone tremendous change in the years that CS Karoney has been in executive management. One key change was the migration from analogue to digital broadcast transmission, which compelled broadcasters to invest in new equipment, new and adequate content to keep up with new market demands as well as competition emanating from new entrants in the now expanded digital broadcast space. Another key change was the emergence of online journalism and the now pervasive social media, resulting in the massive fragmentation of the previous most privileged media pie. These changes called for decisive actions and prepared her for the fast-paced life of a Cabinet Secretary in a docket as crucial as Lands and Physical Planning.

CS Farida Karoney’s pedigree in change management will once again be particularly instrumental as she pushes for the successful roll out of the Ardhisasa platform, which no doubt will face resistance from rogue elements who unjustly profited from the old order and largely the professions that have benefitted from a free for all land transaction juggernaut that has been the culture and norm at Ardhi House.

CS Farida Karoney attended Kenyatta University from 1989 to 1992, graduating with a Bachelor of Science Education degree in Botany and Zoology. She taught Biology briefly at Khamis High School in Mombasa before her entry into journalism in 1994. She obtained her Postgraduate Diploma in Mass Communication (1995-1996) from the University of Nairobi (UoN). After a decade in practice, she enrolled for her Master of Business Administration degree (MBA) specializing in Strategic Management at the UoN in 2005, graduating in 2008. Perhaps, it is from here that CS Farida Karoney became an efficient and effective strategist with analytical, design and problem-solving skills that is well documented in her LinkedIn profile.