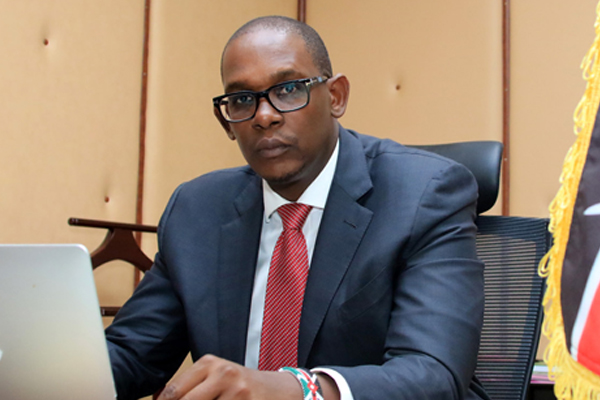 Few careers in civil service are more challenging than that of State House Chief of Staff, a role currently held by Nzioka Waita. Mr. Waita leads the team of dedicated advisers who serve as the President’s executive back office and whose remit is to work behind the scenes to shape policy, firefight, troubleshoot on key issues and provide viable solutions that assist the President in his decision making on a daily basis. It is a demanding job that comes with its fair share of intrigue.

Waita was appointed as Chief of Staff and Head of Delivery in 2018, earning a quick but well-deserved promotion after just two years serving as the Deputy Chief of Staff and Deputy Head of Public Service under the Head of Public Service, Dr. Joseph Kinya. Waita entered public service in 2015 as the Secretary for Delivery in the Executive Office of the President. His appointment as Deputy Chief of Staff a year later and subsequent promotion to the helm of the critical office in 2018 reinforced his place as one of the President’s most trusted advisors and reliable fixers. In the same year that he took charge of personnel at State House, he was also appointed as Head of the Presidential Delivery Unit (PDU), which is tasked with tracking, reporting and publicizing the national government’s flagship development projects.

Known within Government as a strategic thinker, Waita is one of the architects of President Kenyatta’s Big 4 Agenda. The Big 4 is a subset of the country’s Vision 2030 blueprint and the primary development focus of the President’s second term in office.

Waita has done a commendable job publicly promoting the Big 4 Agenda and consistently defending President Uhuru Kenyatta’s development track record. He has achieved this by actively shaping the public narrative around flagship development projects while simultaneously ensuring the teams behind these projects deliver on time and according to plan. During his tenure as Deputy Head of the Public Service, he is reported to have spearheaded the performance contracting process for Ministries, State Departments and semi – autonomous government agencies creating much needed alignment on the delivery of flagship development programs.

The impact of #GoKDelivers was felt most in the hotly contested 2017 general elections, where for the first time ever the campaigns centered primarily on development politics. With the incumbent comfortably able to showcase his development record in a granular fashion hitherto unseen, the narrative around the President’s scorecard was unassailable.

In early 2019, having identified the short comings of the delivery model used in President Kenyatta’s first term in office, Waita worked closely with the Interior Ministry to reengineer the national government’s delivery framework that led to the issuance of Executive Order No 1/ 2019. This directive from the President created the National Development Implementation Cabinet Committee known in Government circles as the NDICC. The new framework collocated National Government Administration and the Delivery Unit as its basic foundational structure allowing for better verification of project status at the grassroot by Government administrators, while at the same time creating a structured filtering processes that guaranteed better quality interventions at the top most policy organs of Government. Following the adoption of this new structure, the Government has been able to complete myriad high priority development projects on time and cost effectively.

A skilled communicator and public relations guru, Waita has leveraged on his expansive reach and influence on social media – more than 200K Twitter followers – to engage Kenyans in meaningful conversations about national development and national values. It is a job that few can do well given the unpredictable and volatile nature of debates on social media. Social media debates can quickly turn into nasty arguments and public relations crises if not well managed.

Waita’s ability to remain calm and think clearly in times of crisis has proven invaluable more than once when public opinion shifted against the government over misunderstood issues. When a section of Kenyan media promoted misguided narratives about the usefulness of the President’s foreign trips in 2019, for instance, it was Waita’s well-articulated response that restored reason to the debate. “One of President Kenyatta’s duties as Head of State is to position Kenya as a force for good and a thought leader in the community of Nations. A duty he has discharged extremely effectively. Foreign travel to advance Kenya’s agenda and sphere of influence is simply part of the job,” he tweeted. Indeed, barely a year after these clarifications, the President’s overtures in foreign capitals paid off. In addition to other diplomatic and trade accomplishments, Kenya was in 2020 elected as a non-permanent member of the United Nations (UN) Security Council, the highest decision-making organ in the UN.

Waita is a regular fixture in national press and appears on TV and radio to discuss issues of national importance and promote national values. His comfort in front of the camera and strong public communications skills stem from his time in the private sector, where he had a successful career in Corporate Affairs at leading communications service provider Safaricom PLC. For those who want to learn, Corporate Affairs is typically the function charged with shaping public reputation and engaging key external stakeholders in large organizations.

As the Director for Corporate Affairs at Safaricom PLC, a role he served in between 2011 and 2015, Waita was responsible for legal, public policy, corporate responsibility, Public Relations (PR) and Communication. Prior to that, Waita served as Head of Legal and Regulatory Affairs between 2007 and 2011.

He joined Safaricom in 2001 and worked his way up the ranks. Between 2003 and 2015, he served as founding trustee to Safaricom Foundation, which has deployed billions of shillings through the years into initiatives in education, healthcare, and conservation.

Waita has held various other positions within the ICT sector including serving as the company secretary of Kenya’s first sub-sea fiber optic cable company TEAMS Limited. Throughout his career, he has distinguished himself as having the uncanny ability to build strong relationships with powerful and influential stakeholders. Many were surprised when he was plucked from the private sector and parachuted into the inner sanctums of power at State House, underlining the solid network he built in the public sector while still working in the private sector.

Waita attended the University of Sheffield between the years 1996 – 1999 and graduated with a Bachelor of Laws (LL. B). Later in his career, he enrolled in graduate school to further his education, graduating from Queen Mary University of London in 2015 with a Masters in Computer and Communications Law.

Raised in a devout Catholic family, Waita spent most of his formative years at renowned catholic school, Saint Mary’s, in Lavington, which counts figures such as President Kenyatta, Baringo Senator Gideon Moi, award winning actress Lupita Nyong’o, and veteran television journalist Jeff Koinange, among other leading luminaries, as its alumni.

However, Waita’s friends and associates credit his humility, street smarts and love for rugby to the high school years spent at The Nairobi School also known within those circles as ‘Patch’. A married family man, Waita is an ardent fan of motor sports and occasionally takes part in the Kenya National Rally Championship Circuit and at the time of writing this article, was expected to participate in the long-awaited homecoming of the World Rally Championship (WRC) Safari Rally after a lull of about 19 years, as a WRC event.