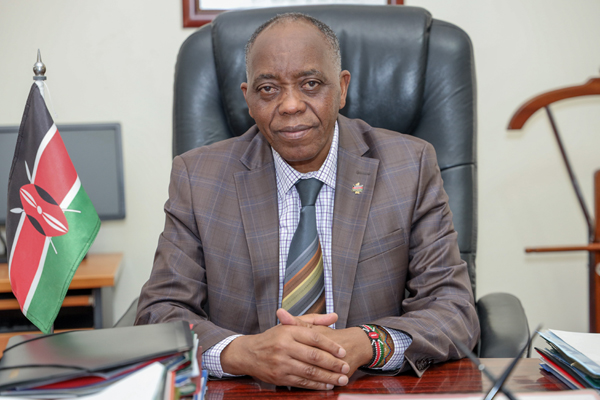 As Head of the Public Service, Dr. Joseph Kinyua chairs the national security committee that reports to the National Security Council in addition to handling the day-to-day administration and co-ordination of the affairs of this important national institution

Dr. Joseph Kinyua, the Head of Public Service, is a career economist who has built a long and distinguished career, spanning more than four decades in civil service. His knowledge of the government bureaucracy and influence over its inner workings is unrivalled. The long-serving civil servant, who has worked in senior roles in successive governments since 1980, heads an office that is charged with the effective and efficient running of the government machinery.

This means that Dr. Kinyua’s influence extends far beyond the Executive Office of the President, where he serves as Permanent Secretary to the President. Administratively, he co-ordinates the intra-cabinet daily work-ins and chairs some critical national committees. The entire public service falls under his purview.

His decisions have heavy impact and weight, as he implements the directives of the President, including important instructions such as re-organization of the government, issuing circulars and reminding all of standing government policies across ministries, departments, government agencies and state corporations.

As Head of the Public Service, he chairs the national security committee that reports to the National Security Council in addition to handling the day-to-day administration and co-ordination of the affairs of this important national institution. Sensitive discussions involving national security and foreign relations are rarely held without his involvement and he acts as a trusted advisor and tough enforcer when critical decisions are made. It is a monumental responsibility that demands as much knowledge and mastery of statecraft as it does the observance and practice of the highest standards of integrity – given the immense power and influence that comes with the job and the potential to change millions of lives for the better or worse with one decision.

Interestingly, the public service that Dr. Kinyua heads today is nothing like the one he joined in the 80s working as an economist for the Central Bank of Kenya (CBK). Dr. Kinyua joined the public service at a time when the headcount for the public sector was considerably smaller. Historical data from government sources indicate that in 1980 the public sector workforce was between 350,000 and 400,000 workers. Today, the latest Economic Survey 2020 puts the headcount of the civil service at 842,900 as at 2019, which is more than double the number in 1980. The government is therefore larger and the subsequent national budgets today run in the trillions of shillings, making the job of the Head of Public Service more demanding than it has ever been. Dr. Joseph Kinyua is the safe pair of hands who has handled this responsibility since the exit of Francis Kimemia, current governor of Nyandarua, and before him, Amb. Dr. Francis Muthaura, another career civil servant and current chairman of the Kenya Revenue Authority (KRA).

However, if there is one thing that distinguishes Dr. Kinyua, is that he has served at top levels in three administrations but remains humble and with an extremely clean records on matters integrity and good national governance. Taking on the job as Head of Public Service in 2013 from the National Treasury was not necessarily an easy transition.

The relationship is one of immense trust that the President also appointed him the Chief of Staff at State House at the same time. However, the ever humble, if not aloof career civil servant exercised the trapping of powers from the two positions honourably and with humility. The soft-spoken Dr. Kinyua managed the overwhelming responsibilities of both offices commendably, helping the government deliver on key development projects while ensuring the affairs of State House were well run.

Under his day-to-day administrative direction, picking the cue form HE the President, government services have been brought closer to Kenyans through innovative models such as the globally acclaimed Huduma Centers. Many of the major development projects in transport and infrastructure that had the President’s close attention – such as the construction of the Standard Gauge Railway (SGR), installation of fiber optic infrastructure, and completion of the Lamu Port, among others – have his invisible fingerprints given his role as the power behind the government bureaucracy, as well as continuity that he provided, having been the budget accounting officer as PS Treasury, when these projects were first mooted under the Kibaki Administration.

Prior to serving as the Head of Public Service, Dr. Kinyua was the Permanent Secretary for the Ministry of Finance in former President Mwai Kibaki’s administration, having been appointed in 2002. He had a brief detour to Ministry of Agriculture for one year in 2003 but was reappointed to Finance to 2004. He served in this capacity throughout President Kibaki’s first and second term. It was during the second term that he established a close rapport with current President Uhuru Kenyatta who was then Deputy Prime Minister and Minister of Finance under the Grand Coalition Government.

Like President Uhuru Kenyatta, who ensured that he roped in Dr. Kinyua from the previous administration upon taking office in 2013, President Kibaki also did the same and tapped the skilled technocrat from the Kanu government. Before becoming PS at the Ministry of Finance in President Kibaki’s administration, Dr. Kinyua was the Chief Economist at the CBK under late President Daniel Arap Moi, a position he was appointed to in 2000 after serving as the Director of Financial Markets at the apex lender for a year. He served as Financial Secretary to the Treasury between 1995 and 1999.

Dr. Kinyua joined the CBK in 1980 as an economist and rose to the rank of Director of Research. Between 1985 and 1990, he worked as an economist with the International Monetary Fund (IMF) before returning back to the Central Bank of Kenya. He was a regular fixture in meetings between Kenya and international financial institutions such as the World Bank (WB) and the International Monetary Fund (IMF) in the 80s and 90s. It must be remembered that these were the years when privatization, economic liberalization and free markets took hold. It was also the years when Kenya made strong forays into international capital markets, thanks to interest from international lenders and development finance institutions who offered low-interest loans. Dr. Kinyua greatly contributed towards building the instruments of sourcing development capital that have kept our economy a step ahead of regional peers for decades.

Dr Kinyua holds a Bachelor of Arts and Master of Arts degrees in Economics from the University of Nairobi (UoN) and briefly lectured at the same institution from 1978 before joining the CBK in 1980.

All these individuals had different styles of leadership and different priorities, challenges, and successes. However, the common link is that, for the time in which they served, there was no doubt in anyone’s mind that these individuals literally held the levers of power in the government. The Head of Public Service is a powerful and influential position where one inevitably makes friends and enemies in equal measure.

However, for all the influence he wields, Dr. Kinyua prefers to take a below-the-radar approach and has kept a low profile for decades. He is also the longest serving Head of Public Service. Close sources quoted in media articles reviewed by Business Monthly describe him as a humble and hardworking public servant and a devote Roman Catholic who is more concerned about work and the ensuing results rather than public display of raw power. One source says that “even as his colleagues immerse themselves in flamboyance, he surrenders his government vehicles on Fridays and uses his private cars on weekends, including Pick-Ups.” For instance, he is famed with the effort to trim the fuel bill by having the government shift from Mercedes Benz to Volks Ws fleet some years back. Indeed, President Uhuru Kenyatta himself is on record describing Dr. Kinyua as “one of most honest and dedicated people,” he knows.

Perhaps it is this humility and commitment to serve the Kenyan Nation that has earned Dr. Kinyua a focused and well-grounded tenure through three successive administrations, all with different focus and approach to matters state.

None to be involved in petty politics or ethnicity, Dr. Joseph Kinyua has been able to take differing roles but with increasing levels of responsibility while earning deep respect from everybody who gets to know him well.