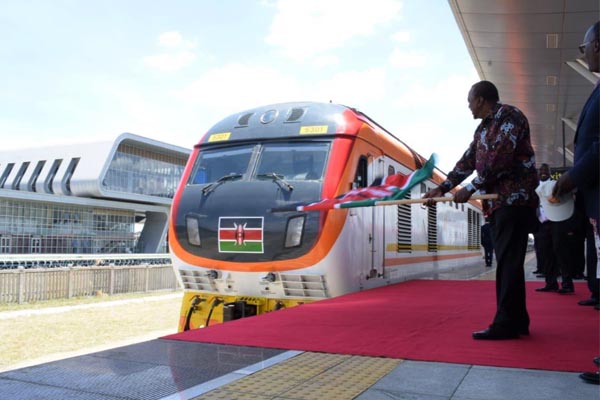 KRC has performed exceptionally well rehabilitating the old meter gauge railway, which traces its roots back to the colonial era.

Established in 1978 through an Act of Parliament, the Kenya Railways Corporation (KRC) has roared back to life in recent years following the launch of the Standard Gauge Railway (SGR). Funded and built by the Chinese, the 480-kilometer-long line connecting Mombasa to Nairobi has been operated and managed jointly by KRC and Chinese contracted firms since its completion in 2017. This is, however, changing.

KRC is currently on track towards assuming full responsibility for the management of SGR, marking an important milestone for the country. KRC Managing Director and CEO Phillip Mainga, in media statements earlier in the year, confirmed that more than 60 per cent of SGR operations are now handled by KRC. The goal is to move to 100 per cent by end of 2022. This means KRC will now oversee loading and offloading of the SGR passenger and cargo trains, in addition to taking on the responsibility for other key management functions such as ticketing.

Mr. Mainga noted that the transfer of SGR management to KRC will result in cost savings and local job creation, “We are optimistic that once all staff members from the operator are brought on board, the cost of operation will go down,” said the CEO, who was appointed to the position in 2020 after having successfully served as the parastatal’s Research Manager.

The SGR has had some important successes. Trains run faster than the former railway or road traffic, and its passenger services are popular. Passenger tickets typically sell out weeks in advance of busy seasons such as Easter and Christmas. The amount of freight carried by the SGR has risen significantly since commercial operations began, and it has helped to decongest port operations, speed freight transportation, and enhance cargo security.

SGR has also been successfully extended from Nairobi to Naivasha, with plans to move further inland to Kisumu, Malaba and ultimately to Uganda in coming years. KRC now has the important task of consolidating and extending these gains, even as plans to finance and implement the expansion of the line further inland gather steam.

One important milestone KRC has achieved in 2022 is the successful linkage between the SGR and the old Meter Gauge Railway to provide seamless transportation. KRC earlier in the year conducted its first trial train cargo from Mombasa to Malaba on the newly constructed link which connects the Standard Gauge Railway and Meter Gauge Railway in Naivasha.

While the future is anything but certain, the exemplary track record that KRC has established in executing its mandate in recent years inspires confidence that it will be equally successful in managing and expanding the SGR.

KRC has performed exceptionally well rehabilitating the old meter gauge railway, which traces its roots back to the colonial era. Despite being over a century old, the meter gauge railway still occupies an important place in the country’s transport network. It provides crucial linkages between Nairobi and Kisumu, as well as Nairobi and other inland markets, including towns such as Nakuru Nanyuki and Eldoret, just to name a few.

The old meter gauge railway had fallen into a sorry state of neglect in the years, prompting KRC to kick off a project of repairing and rehabilitating the line. The state corporation has successfully rehabilitated more than 566 kilometers of this line, breathing new life and opening many towns and rural centers in the process.

Some examples of milestones achieved under this project include the rehabilitation of the 178-kilometer Nairobi – Nanyuki line in 2021. This led to the resumption of cargo and passenger train services along the route after an absence of almost 20 years. The rehabilitated line is also a boon for traders in the agricultural towns along the line. It allows coffee and tea farmers to move their produce at greatly reduced costs, improving their profit margins and livelihoods of the natives along the line and its hinterland. KRC has also reintroduced livestock transport, meaning livestock farmers can transport their cattle from Nanyuki Railway Station to Nairobi’s Kenya Meat Commission Depo at reduced costs.

KRC has also revived the 217-kilometer Nakuru-Kisumu MGR line after almost 25 years of dormancy. There are a total of 18 stations along the line, all of which have been renovated. They are expected to stimulate trade and revitalize dozens of local economies. Passengers get to enjoy the scenic Rift Valley during travel, unlocking the untapped tourism potential of the region.

KRC continues to play an integral role in improving the efficiency of public urban transport within Nairobi. The capital city’s transport network has long been weighed down by traffic congestion and poor planning. This situation is being managed by getting more commuters to use the train, a move that KRC has been actively pursuing through investments in infrastructure and staff training aimed at improving the capacity of the city’s rail network and creating better experiences for the commuters, especially during the peak hours.

KRC is building ten new stations in Nairobi and its satellite towns as it seeks to bring its services closer to commuters and boost passenger numbers. The upcoming stations are in Kibera, Kenyatta University, Mukuru Kwa Njenga, Satellite in Nairobi and Mutindwa, Lukenya, and Konza in Machakos.

Part of the reason why the KRC has been highly successfully in recent years is the stronger governance frameworks that have been put in place at the organization. In addition to a competent and ethical leadership composed of tried and tested public servants, KRC is under the watchful radar of the Kenya Transport and Logistics Network (KTLN), whose super board of directors is chaired by John Ngumi, a financial whisky known for his turn-around leadership skills.

Created by an Executive Order, the state agencies under KTLN are KRC, Kenya Pipeline Company (KPC) and the Kenya Ports Authority (KPA), all of which have been brought under the coordination of Industrial and Commercial Development Corporation (ICDC) as a holding company. Of note, ICDC now sits under the National Treasury. The synergies and efficiencies that have been unlocked by this realignment and focus of strategic transport agencies is providing a strong footing for KRC to continue implementing its transformative agenda and impacting the lives and livelihoods of Kenyans.