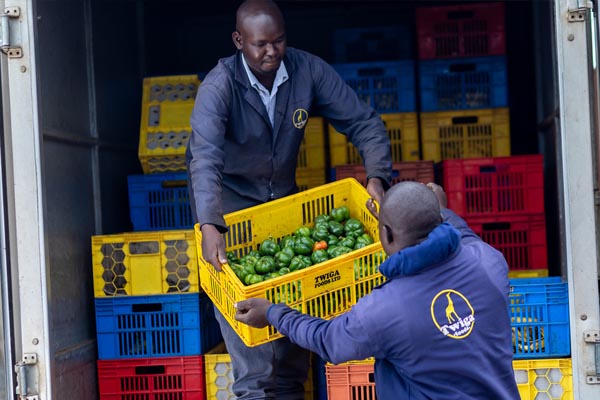 Twiga Foods has in less than a decade established itself as the leading business-to-business digital marketplace.

The World Bank estimates that more than 70 per cent of Kenya’s total agricultural output is produced by smallholder farmers. Even though smallholder farmers play an integral role in maintaining the nation’s food security, many of them face huge challenges accessing markets for their produce. Some of the common barriers to market access include unscrupulous brokers who take advantage of the farmers’ low bargaining power, poor storage and transportation infrastructure, and lack of scale.

These challenges not only affect farmers’ livelihoods but also lead to high cost of food, which threatens food security. Data from the US Department of Agriculture show that Kenya is among the countries whose citizens spend the highest proportion of their household income on food: an average of about 45 per cent, compared with less than 7 per cent in the US.

One Kenyan company is, however, leveraging on the power of digital technology and ecommerce to change this narrative. Twiga Foods, which was founded in 2014, has in less than a decade established itself as the leading business-to-business digital marketplace connecting smallholder farmers to retailers and food processing companies.

Through its ecommerce platform, Twiga Foods allows fresh produce retailers and food processing companies to replenish stock from the comfort of their mobile phones. The farmers that Twiga Food sources from are then paid within 24 hours of an order. This quick turnaround has made Twiga popular among smallholder farmers and helped it accelerate its growth. Moreover, the company has integrated mobile payments in its supply chain platform. Most farmers on its platform receive their payments through mobile money services such as M-PESA and information is recorded in real time in the field to enable timely settlement of payments.

Twiga says it employs over 1,000 people and has over 100,000 customers for its services across Kenyan cities, delivering over 600 tonnes of product to over 10,000 retailers daily. Overall, the company works with more than 13,000 farmers, according to statements on its website.

Twiga’s growth has enabled it to attract billions of shillings in long-term investments from leading development finance institutions, venture capital funds and private equity funds. In 2021, it closed a $50 million (approx. Ksh5.8 billion) Series C round to scale its efforts in the Kenya and other neighboring countries in the East African region. This is after raising another $30 million (approx. Ksh3.4 billion) Series B round in 2019. Overall, the company has raised more than $100 million (approx. Sh11.6 billion) in debt and equity financing since its founding, according to a compilation by TechCrunch, a technology-focused US media outlet.

Twiga has been able to win the backing of investment industry heavyweights like International Finance Corporation (IFC), 1776 Ventures, TLcom, Creadev, Endeavour Catalyst, and Goldman Sachs’ spinoff Juven, among other big names in the investment industry.

In a 2021 interview with Bloomberg, Twiga’s co-founder and CEO Peter Njonjo noted that the company could reach a $1 billion (approx. Sh116 billion) valuation in the next five years amid continued growth and expansion on the continent.

Peter’s dream of hitting a $1 billion valuation is possible given the pace at which Twiga is growing. As an example, Twiga recently injected $10 million (Sh1.1 billion) in a new farming subsidiary called Twiga Fresh through which it will farm and distribute its own agricultural produce to traders. Twiga said it has begun producing horticultural produce like onions, tomatoes, and watermelons on its 650-hectare (1,606 acres) land, with an estimated output of 150,000 tons of fresh produce annually.

The company says its farm is one of the largest commercial fresh produce establishments targeting the domestic market since most large-scale horticultural businesses in Kenya export their harvests.

Twiga noted that its new subsidiary will not make it cease working with smallholder farmers in addressing the challenge of food security. “We will continue to run the B2B e-commerce business under Twiga, focused on building a one-stop supply-chain solution for informal retailers, delivering both Twiga and non-Twiga owned products. Twiga Fresh, in addition to our growing range of private label products, will ensure we drive growth in customer numbers and broaden the basket size by offering quality produce at a discount against prevailing market prices,” said CEO Peter Njonjo.

Twiga Foods has not only contributed to the welfare of smallholder farmers, but also made immense contributions to Kenya’s startup culture. Few companies in Kenya have managed to grow at the pace and scale that Twiga Foods has. In eight years, it has raised billions in financing and won global recognition for its explosive growth. It featured in the “100 Most Influential Companies in the World 2022” ranking by Times Magazine, alongside other global leaders like Microsoft, Apple, Disney, and Ford, among others.

Peter Njonjo, Twiga Food’s co-founder, has emerged as a powerful inspiration for other entrepreneurs in Kenya. The Certified Public Accountant started the business with his co-founder Grant Brook while still working for beverage company, Coca-Cola, where he served as President for West Africa.

Peter, who in his time as a Coca-Cola employee served as Twiga board chairman (with Grant serving as CEO), was able to juggle the demands of his new business with the pressures of his high-profile job with a leading multinational. He would eventually quit the beverage maker in 2019 to fully concentrate on Twiga and carry on as CEO.