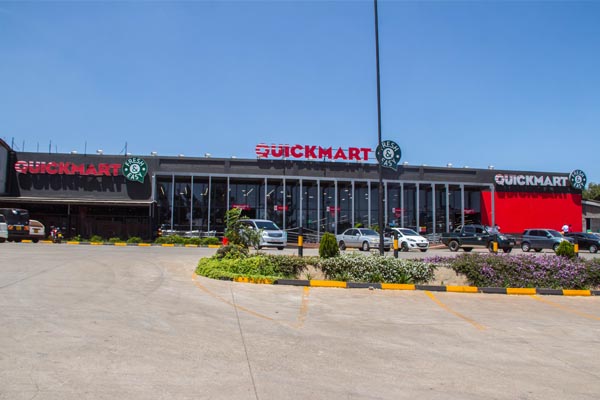 Quickmart has been growing strategically and responsibly. Absorbing the operations of a stable and successful chain like Tumaini proved to be a very sound growth strategy.

Quickmart is a brand of Quick Mart Limited. It is a remarkable success story that stands out as a hallmark of an evolution of a supermarket brand.

Kenya’s retail sector has in the past few years been in the headlines for unfavorable reasons. In less than five years, six supermarket chains have exited the market due to poor business strategy or mismanagement. This has been a silent boon for the well-run supermarket chains such as Quickmart which today has the second largest branch network of 53 supermarket stores with a footprint in 15 counties in Kenya.

From a humble beginning in the outskirts of Nakuru in 2006, Quick Mart Limited was founded by the Late John Kinuthia as a family business. In 2010, his son Duncan Kinuthia took over the management of the business. Since 2010, Quickmart was able to grow steadily to 4 stores by 2014.  It then gained further traction under Peter Kang’iri, who was then a leading consultant in the retail management in Kenya. This enabled the scaling up and growth of the business to 11 stores by 2018.  In 2018, Peter, who was also consulting for Tumaini Supermarkets, was able to bring on board Adenia Partners to invest in Tumaini Supermarkets and   subsequently also in Quickmart in 2019.  Adenia Partners is a Mauritius-based private equity investment firm focusing on promising firms in sub-Saharan Africa (SSA). It manages assets valued at over $400 million (approx. Sh46.4 billion) and has a presence in Mauritius, Madagascar, Cote d’Ivoire, Ghana, and Kenya.

As a result, in 2019, a merger was organized between the two supermarket retailers.   Trading under the brand name ‘Quickmart’; the new merged entity became the second largest retailer in Kenya with Peter Kang’iri being appointed the Group Managing Director and Chief Executive Officer.   Together with a seasoned management team, Peter has been able to transform Quickmart into a structured corporate run entity, with good governance practices, that attracts professionals from all sectors, including expatriates, which has never been the norm for supermarkets in Kenya, hence the frequent failures.

Quickmart has been growing strategically and responsibly.Absorbing the operations of a stable and successful chain like Tumaini proved to be a very sound growth strategy.   Since then, Quickmart has been able to acquire stores previously operated by other retail brands such as Tuskys, Choppies, and Mulleys.  The retailer plans to continue on this growth trajectory in addition to greenfield sites acquisition.

Bringing on an experienced private equity partner not only avails capital to expand, but also allows a firm to tap into the management expertise of the private equity firm. These firms typically have existing stakes in several other fast-growing businesses and are run by seasoned executives and entrepreneurs who have gathered critical insights on the growth strategies that work in different market environments.

With Adenia Partners’ help, Quickmart has been able to carve out a unique operating model based on a cost-efficient logistics framework, a product category centric model, an attractive cost structure, and an ESG-oriented DNA.  In addition, Quickmart has a unique store concept with the largest footprint of fresh items, which has contributed to a strong brand perception of “Fresh & Easy”.  It focuses on high traffic areas where the retail penetration is preferably at its minimal.  These, coupled with other factors, has seen a strong revenue growth over the past four years; with a turnover of KES 9Bn in 2019 to Bn 26 in 2021.

To make the best of high consumption in urban areas like Nairobi, Quickmart has expanded the number of 24-hour operating stores in strategic locations with high footfall in the city.  It now has twelve 24-hour stores, with 11 of them being in Nairobi County and the others in Kajiado. Quickmart’s investments in 24-hour stores has been complemented by its home delivery service; and is seeking to find more space in the e-commerce segment in the near future.

In addition, to extending its physical reach and reinforcing its brand identity as a leading and trusted national supermarket retailer, Quickmart has also performed exceptionally well as a business. The privately owned supermarket chain was also listed as one of the fastest growing companies in Africa in a ranking by the Financial Times in 2022. The London-based international business publication looked at metrics like revenue growth, financing raised from investors, and growth in the number employees, among others. The Financial Times report notes that Quickmart grew by a CAGR (Compounded Annual Growth Rate) of 60 per cent per year between 2017 and 2020 and is Africa’s 11th fastest growing company. Its revenues grew from Ksh4.68 Bn in 2017 to 18.79 in 2020 and currently stands at Ksh26 billion.

While still an indigenous home-grown brand, Quickmart has leveraged its strong track record to attract strong partnerships with various stakeholders. For instance, this year, Quickmart received a grant of Ksh20 million from Deutsche Gesellschaft für Internationale Zusammenarbeit (GIZ) in partnership with Kenya Market Trust for implementation of the technical assistance and business coaching project aimed at catalyzing – uptake of hygienic standards and increase competitiveness in the meat industry.  Upon completion of the project, Quickmart expects to double its profits in the butchery section.  In 2021, Quickmart was awarded a grant of Ksh 8.3m from The Global Alliance for Improved Nutrition (GAIN) to support vulnerable staff in the face of Covid-19.

Quickmart’s corporate social responsibility (CSR) initiatives mainly target non-profits, schools, hospitals, and other similar organizations that solve social challenges. Some organizations it has partnered with include Ebenezer Children’s Home, since 2010, and Hope for Orphans Rescue Center, a collaboration initiated in 2013. In a nutshell, Quickmart’s CSR initiatives is supporting hundreds of vulnerable children in Kenya.

If Quickmart can keep growing its market share, it has a very promising future in view of the continued growth of Kenya’s retail sector. Annual consumer spending in the country has increased close to 8 times since the turn of the new millennium. Kenyan consumers spent $9.95 billion in 2000, $30.86 billion in 2010 and $78.79 billion in 2019, World Bank data shows. “We are confident that Quickmart’s trend of growth and prosperity shall continue as we have in place an elaborate strategic plan for the next 5 years that targets to grow the turnover to KES 76 Bn”says the Quickmart CEO.  In its growth trajectory, Quickmart plans to have 105 stores across 30 counties by the year 2026, increasing the number of employees from the current 5,200 to 12,000.

The strong growth in Kenya’s consumer spending, which has fueled the growth of the retail sector in recent years, is not cooling down any time soon. The greatest catalysts for consumer spending are high population growth, rapid urbanization, and strong wage growth. Kenya is experiencing all three at the same time.

World Bank data shows that Kenya’s relatively high urbanization and population growth rates of 4.0 per cent and 2.3 per cent, respectively, are higher than the global average of 0.9 per cent and 1.1 per cent, respectively. Total public and private sector wages have also grown at a fast pace in recent years. The Economic Survey 2022 by the Kenya National Bureau of Statistics indicates that total wages in the public and private sector grew from KES 1.9 Tn in 2017 to KES 2.3 Tn in 2021, with the average wage per employee also increasing.

Quickmart’s expansion against the backdrop of these favorable macro-economic conditions is therefore sustainable, especially with the good management and corporate governance practices in place. These fundamentals positions Quickmart for sustainable continued success.  The brand has become a trusted retailer and household name in Kenya.   Its unique and robust operating model as well as its strong track record of expansion and integration has poised it for a sustainable long-term strong and profitable growth. Only time will tell if Quickmart will someday realize its vision ‘To be the retailer of choice in every market it serves in Africa’.