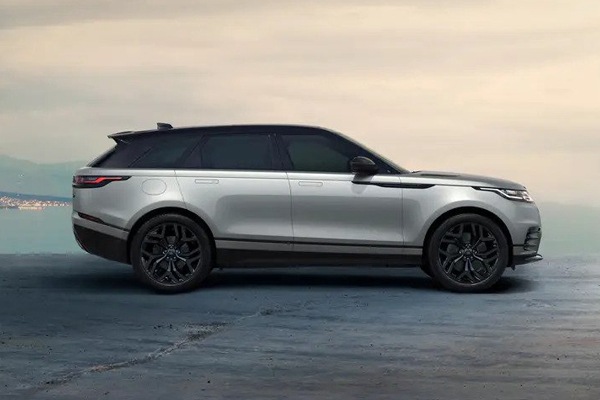 Range Rover’s mid-size luxury SUV, the Velar – which sits between the Evoque and Sport in the family line-up is now even more desirable, sustainable and intelligent. The 2022 model is Land Rover’s style-focused compact SUV, earning its place alongside its luxurious brethren with a high-class ambiance. It’s offered with either a turbocharged four-cylinder, a turbocharged-and-supercharged inline-six and 2022 sees the introduction of an electric plug-in hybrid option.

For 2022, Range Rover made only minor changes to the Velar. Heated front seats are now standard across the line-up and a new cabin air-filtration system with ionisation is available as an option. New and optional, is an updated adaptive cruise control feature that offers both steering assist for highway driving and an off-road mode. Ostuni pearl white and Lantau bronze metallic join the available colour palette.

The new 2.0-litre four-cylinder P400e plug-in hybrid offers a smooth and refined drive, producing a combined 404PS and 640 Nm of torque from its 300PS petrol engine and 105kW electric motor, with an impressive 0-100km/h in 5.4 seconds. A 17.1Wh lithium-ion battery, located under the boot floor, can be charged to 80 per cent in just 30 minutes using a fast DC charge point, or 1 hour 40 minutes using a standard 7kW wall box. With zero tailpipe emissions in electric mode, an impressive real-world all-electric range of 53km, fuel economy of up to 2.2 litres/100km, the Range Rover Velar is now even more sustainable by design.

The MHEV system uses a Belt integrated Starter Generator (BiSG) in the engine bay to harvest energy usually lost under deceleration, which is then stored in a 48V lithium-ion battery located beneath the rear load space. It is able to redeploy the stored energy to assist the engine when accelerating away, while also delivering a more refined and responsive stop/start system.

The D300 diesel generates 650 Nm torque, 0-100km/h in 6.5 seconds with fuel economy of up to 6.3litres/100km. Series sequential turbos and an advanced after-treatment system make it one of the world’s leading clean diesel engines.

Additionally, the next generation four-cylinder Ingenium D200 (204PS diesel) is introduced on the Range Rover Velar, offering more power and improved fuel economy. The engine is offered with the same 48-volt mild hybrid technology as the rest of the range, with fuel economy of up to 6.3 litres/100km.

Much like the Velar’s acceleration, its handling is by no means sporty. The suspension competently controls the SUV’s body motions and keeps body roll in check while returning a firm, well-managed ride. Models equipped with the available air suspension can raise and lower their ride height for either more dynamic moves on-road or greater dexterity off it.

Do you like modern architecture? You’ll probably like the Velar’s simple interior, rendered largely from horizontal lines and bold rectilinear forms. Oh, and the materials used throughout are high quality and deployed in interesting ways. Take the door trim: Instead of using a spear of wood or carbon fibre inlaid into the upper part of the door panels, Land Rover adds the owner’s choice of wood or metal into the section of the door between the upper and lower panels – every Velar has excellent detailing throughout. The Velar’s generally boxy shape and visually pleasing rear overhang – bodywork that extends behind the rear wheels – combine to swallow more carry-on suitcases than its immediate competitors with its rear seats up or folded. One can fit 10 carry-ons behind the rear seats and 23 with all seats folded.

Of course, we’d be remiss if we discussed the interior without tipping our caps to the wildly futuristic-looking dual dashboard-touchscreen displays. These dual 10-inch displays run Land Rover’s new Pivi Pro infotainment interface, which is both easier to use and more responsive than last year’s InControl Touch Pro system, but it’s not without its quirks. Bluetooth phone and audio connectivity, voice control, eight speakers, in-dash navigation, and Apple CarPlay/Android Auto integration are all standard. A better audio system with more speakers and SiriusXM satellite radio requires additional options or a move up through the Velar’s trim levels.

According to the manufacturer, the Range Rover Velar leads the way in reductive design. Clean, elegant and distinctive, the Range Rover Velar has a striking, contemporary presence. The car is beautifully balanced, with optimised proportions. Its proud Range Rover lineage is instantly recognisable: from the formal, powerful front end, through a flowing, continuous waistline, culminating in a taut and elegantly tapered rear.