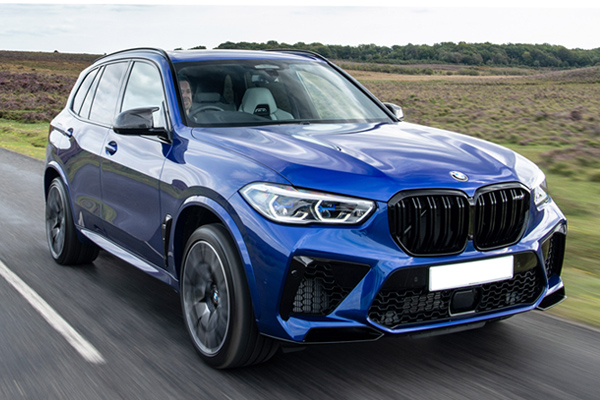 The X5 is a solid choice, with rivalry from Audi Q7, Porsche Cayenne and Mercedes-Benz GLE.

BMW’s foray into SUV territory started in 1999 with one model – the BMW X5. Currently in its third decade of production, the X5 is a compelling choice in the midsize luxury SUV segment. All X5 derivatives offer impressive acceleration, a wealth of technology features, and a spacious, interior cabin. When necessary, one ca add a third-row seat, although with a pinch. For a consistent need of a seven-seater, the larger BMW X7 is your choice.

The X5 is a solid choice, with rivalry from Audi Q7, Porsche Cayenne and Mercedes-Benz GLE. The 2022 BMW X5 carries over with minimal changes beyond the arrival of an opulent Black Vermilion version of the xDrive40i, a well-appointed interior and a pleasurable driving experience in one handsome package.

The entry-level models are equally richly outfitted with modern technology and convenience features, not to mention silky-smooth inline-six-cylinder engine. Upgrading to the plug-in hybrid model gives the X5 the ability to drive solely on electric power for short trips while the optional twin-turbo V8 engine delivers seriously punchy acceleration for long hauls. It might not be as plush inside as some rivals, nor quite as athletic as the Cayenne, but when compared to SUVs such as the Q7 and the GLE-class, the X5’s well-roundedness shines through.

The limited-edition Black Vermilion model is new to the line-up for 2022. This black-and-red beauty features unique styling cues as well as a host of high-end features such as Merino Black leather upholstery with red piping, a glass shift knob, a faux-suede headliner, a leather-covered dashboard, and a Harman/Kardon stereo system, to name a few. It’s based on the xDrive40i model.

In the new line-up, the wireless smartphone charging pad is no longer offered and the convenience package (remote start, four-zone automatic climate control, Wi-Fi hotspot) has been eliminated from the spec sheet for 40i models. Two new colours are available for 2022 – Sparkling Brown Metallic and Dravit Grey Metallic, and buyers can now order the fancy glass shift knob and control buttons as a standalone option.

The xDrive40i is the X5 to buy. With an impressive zero-to-100-kph time of below 5.0 seconds, it’s got sports-sedan acceleration, comes with all-wheel drive, and is a relative bargain in this pricey class. We’d recommend adding the premium package for its head-up display, four-zone automatic climate control, remote engine-start capability, and Harman/Kardon stereo system.

The 2022 BMW X5 is available in four trim levels. The sDrive40i has rear-wheel drive, while the xDrive40i, xDrive45e, and M50i include standard all-wheel drive. A high-performance X5 M is also available. The X5 is offered with one of three distinct powertrains, each associated with the above 4 main models. X5s wearing the sDrive40i or xDrive40i badge are powered by a 335-hp turbocharged inline-six. The plug-in hybrid xDrive45e comes with a turbocharged inline-six and an electric motor that combine for 389 horsepower. The M50i’s 523-hp twin-turbo V8 enables it to rush to 100 kph in less than four seconds. All three powertrains are paired with an eight-speed automatic transmission, and none of them will leave drivers wanting for power in virtually any driving situation.

The X5’s refined ride and stable handling is a big improvement compared with the previous-generation model, as is its steering, which feels more connected and direct, albeit slightly sporting in feel. Pitch the X5 into a fast corner, and it holds on reliably and rewards the driver with a predictability that’s missing from its main competition.

The xDrive45e model comes standard with a 24.0-kWh battery pack that BMW claims is good enough for up to 48 kilometres of electric-only driving. The X5 can use the battery to travel up to 135 kph without tapping the petrol engine. The battery pack can be charged at home on 110-volt or 220-volt outlets or at public charging stations.

For both the first and second row, interior space is generous for adults, but the X5’s optional third row is only suited for kids. Once settled inside, occupants are treated to a cabin lined with high-quality materials, plenty of charging points for devices, and depending on the options chosen, a myriad of luxury features. Power-adjustable front seats with memory for the driver are standard. All models come with a power-adjustable steering column, heated front seats, a panoramic sunroof, dual-zone automatic climate control, a power rear liftgate, rain-sensing windshield wipers, and customizable ambient lighting. Massaging seats, remote start, soft-close doors, acoustic glass, a leather dashboard, and heated front armrests and steering wheel which make the X5 feel like a high-end luxury SUV.

Twin 12.3-inch displays add a contemporary look to the otherwise restrained cockpit. One serves as a digital gauge display – a feature that’s becoming increasingly common among luxury automakers, and the other provides access to the infotainment system, which runs the latest version of BMW’s iDrive software. Users can control the system using a variety of methods, including gesture controls, which are less intuitive than just touching the screen or using the centre-console-mounted rotary knob. Apple CarPlay and Android Auto are both standard.

BMW has got to know SUV buyers well, and has built a really solid entry that effortlessly blends luxury, versatility, and performance – plus, offers some old-fashioned BMW driving magic. The basics in the X5 are right. The X5 is road competent, and most features and technology are offered as standard.

Driving an X5 comes with a certain image – you could just lean into it and go for the raucous M version, or try and appease onlookers with the eco-friendlier plug-in hybrid.

Whichever X5 you go for, they’re all superbly powered and great to steer. It is good off-roading too, which can’t be taken for granted in this class.

Visit Inchcape Kenya’s BMW division at their Westlands showroom in Nairobi, Kenya for you to take a deeper dive into the version of the X5 that is officially available.