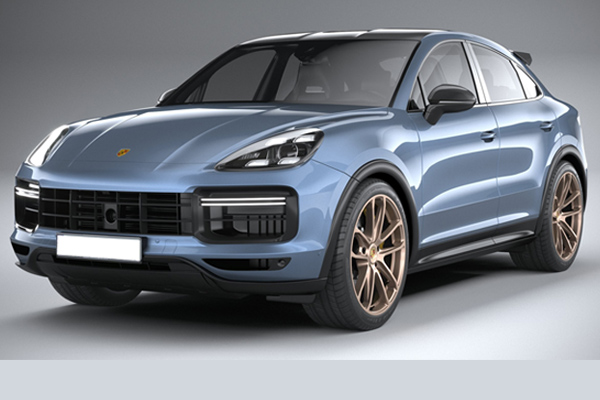 Based on the Cayenne Turbo Coupe, the new Turbo GT packs a powerful V8 engine, a quick-shifting transmission, and a bunch of enhancements that make it Porsche's fastest-ever production Cayenne.

The 2022 Porsche Cayenne Turbo GT has been getting headlines because it earned the title of being the quickest SUV around Germany’s famed Nürburgring Nordschleife, but one is sure to forget about the ‘Ring after spending some time behind the super SUV’s wheel. It doesn’t matter where you drive it, the Cayenne Turbo GT conquers any kind of pavement you can find.

Based on the Cayenne Turbo Coupe, the new Turbo GT packs a powerful V8 engine, a quick-shifting transmission, and a bunch of enhancements that make it Porsche’s fastest-ever production Cayenne. Its 471 kW four-litre biturbo V8 provides the basis for superb driving characteristics. With 67 kW more than the Cayenne Turbo Coupé and maximum torque of 850 Nm – an increase of 80 Nm, the 0-100 km/h sprint is reduced to 3.3 seconds – 0.6 seconds less, and top speed is now 300 km/h – an increase of 14 km/h.

With even sportier lines and available exclusively as a four-seater Coupé, the Porsche Cayenne Turbo GT comes with all available chassis systems fitted as standard and performance tyres developed specially for this model. The powertrain and chassis also have a unique set-up specifically tuned for the Cayenne Turbo GT. The result is a harmonious overall concept with superb racetrack capability. This has been proven by Porsche test driver Lars Kern, who lapped the 20.832 km Nürburgring Nordschleife with the Cayenne Turbo GT in a time of 7 minutes 38.9 seconds, setting a new official SUV record.

Compared to the Cayenne Turbo Coupé, the Turbo GT rides up to 17 millimetres lower. Based on this, both the passive chassis components and active control systems have been re-engineered and optimised for handling and performance. They also feature specific calibration to guarantee perfect interaction between them.

You don’t need a monster racetrack to enjoy it, because this Cayenne model shines and gets your attention just as well on flowing country roads, as its inspired performance injects you with adrenaline.

The Cayenne GT’s 4-litre twin-turbo V8 takes centre stage with its blitz worthy power and torque outputs. While these numbers don’t match the Cayenne Turbo S E-Hybrid’s, make no mistake: the Turbo GT is Porsche’s most performance-oriented SUV. In this case, Porsche’s much-lauded GT team did not help with the car’s development, but the Turbo GT proves its point all the same.

In addition to the powerful engine, Porsche gave the SUV several enhancements to make it drive even more like a sports car. The air suspension is 15 percent stiffer compared to the Cayenne Turbo, with the system adjusted to handle the extra power. The power-steering setup and rear-axle steering are also re-tuned, and Porsche engineers said they were overall able to reduce body roll and increase the car’s precision in corners.

The Cayenne Turbo GT’s 22-inch Pirelli P Zero Corsa tyres were developed for the Turbo GT, and its carbon-ceramic brakes, distinguished by their yellow callipers, measure a massive 17.3-inches in the front and 16.1 inches back. The Cayenne Turbo GT’s all-wheel-drive system includes a water-cooled transfer case to support the model’s ultra-high performance.

Porsche thankfully also focused on reducing weight. The titanium sport exhaust and the SUV’s wheels, for example, shaved some load. Other bits exclusive to the Turbo GT include a carbon-fibre roof, a unique front fascia with larger air intakes, a centre exhaust pipe, and an awesome-looking carbon-fibre fixed rear spoiler.

A sea of Alcantara is probably the first thing you’ll notice once onboard the 2022 Porsche Cayenne Turbo GT. From the sport seats to the door panels to the steering wheel, the GT is covered in the suede-like material. Additionally, the bronze-like seatbelts, seat inserts, and contrast stitching match the Neodyme wheels and distinguish the Turbo GT from other Cayenne cabins. Black or red leather is available as an option.

Also helping to differentiate this version from other Cayennes are Turbo GT logos throughout the cabin, a red button on the drive-mode selector, and the lack of metal around the air vents. Everything else, however, is very similar to the Cayenne Coupe, including the centre console’s sporty handlebars.

While the Cayenne Turbo GT’s power figures raise eyebrows, its handling and steering are sure to impress. In every corner, the Cayenne Turbo GT promises balance and stability to rotate nicely on twisty roads while maintaining a composed posture. What’s even more impressive is the degree of confidence one will feel behind the wheel as it will do everything so well, plus encourage you to try harder for the next corner, braking later and carrying more momentum through to the exits.

Like in a sports car, the GT’s suspension is calibrated so you feel almost every bump or rut. Its tyres feel like tar, delivering massive traction, and its steering is as accurate as you’ll find in an SUV. Simply aim the steering wheel’s yellow centre stripe in the right direction, and you probably won’t have to move your hands again.

Then there is the lightning-fast 8-speed transmission and the Turbo GT’s power delivery. The transmission is so quick and so well calibrated, one pretty much doesn’t need to ever use the paddle shifters for any reason other than you just enjoy doing so. Step on the throttle and you feel the torque get to the pavement with linearity and seemingly endless push. The experience makes you feel like a kid riding an infinite sugar rush.

The ride can feel a bit harsh on city streets, thanks to the wheels and tyres and stiffer suspension. You’ll also note that the tyres are loud. Another thing to note: The loud exhaust note, even when the sport exhaust is switched on, doesn’t make it into the cabin – as much as the target owners and drivers would like. Stand outside, though, and the roar is impressive.

It’s no surprise the Porsche Cayenne Turbo GT is fast, fun, and agile, words we’ve used to describe other Porsches in the past. The way it accelerates and brakes, combined with its magnificent grip and its lack of significant body roll, make this Cayenne worthy of the GT badge. Being the quickest SUV around Nürburgring is one thing, but delivering joy, confidence, adrenaline, and a raucous good time on real-world roads is what makes the Cayenne Turbo GT really stand out as special.

A visit to the Porsche Centre Nairobi is necessary for the well-to-do East African individuals to peruse the German manufacturers offerings.