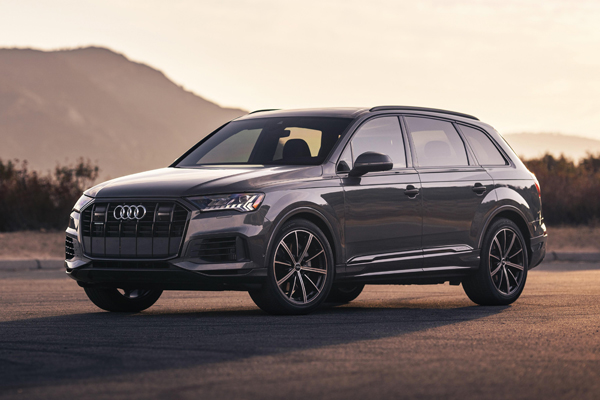 A thoroughly-revised Audi Q7 has been delivered to the world and it is unfortunate we do not have a dealer locally. Once more, the notable styling, mechanical and interior upgrades by Audi have propelled this premium SUV to the top of its segment. It is a pity the discerning motorists have to turn to the roadside auto-shops for this premium brand, with all the accompanying dust.

When Audi’s 2nd-generation Q7 was launched in sub-Saharan Africa in 2015, it impressed four-ring fans with its modern and comfortable interior cabin, which featured impressive tech features and exemplary levels of refinement, not to mention superb on-road comfort. However, when it comes to the exterior, the Ingolstadt-based brand’s Premium SUV’s understated styling isn’t as convincing as its competitors.

With this latest and substantial facelift, the Q7 offers considerably more curb appeal and is notably more sophisticated than before. Moreover, the interior updates represent a major step forward, rendering Audi a formidable rival to other offerings in this segment, from Mercedes-Benz, BMW, Volvo and Land Rover.

The revised single-frame grille makes this facelifted Q7 easily recognisable, which now features six (vertical) vanes – previously, they were (horizontal) slats. In S Line guise, a chrome blade runs the width of the front bumper, while the grille is finished in titanium black. The Q7’s front-end styling is further enhanced by virtue of being equipped with Audi’s Matrix LED technology, but it’s an optional extra. Large 20-inch wheels are offered as standard. At an extra cost, one can adorn their Audi with 21-inch, 5-double-spoke V-style alloys finished in Graphite Grey.

The updated Q7’s cabin is deeply impressive. When you plant yourself behind the Audi’s elegant steering wheel for the first time, you’d be forgiven for being overwhelmed by the sheer number of technology and luxury features in front of you. As you would expect for a vehicle in its price range, perceived build quality is top-notch and the overall “look and feel” is decidedly premium. Perhaps the most significant upgrade is the dual digital screen setup, with the upper 10.1-inch screen dedicated to core functions – such as infotainment, navigation, telephony and key vehicle information, while the lower 8.6-inch screen provides easy access to the climate control system and also serves as a writing pad if one needs to quickly search for contacts or navigation destinations.

The screens effectively reduce the need for physical buttons in the cabin, offering acoustic and haptic feedback, giving a feeling of one pressing physical button when you tap on the surfaces. The screens’ menus are simple and easy to navigate, with functions such as Apple CarPlay and Android Auto being accessed wirelessly: You do not need to plug in a cable to access.

Thanks to an embedded sim card, the Q7 is capable of offering live traffic information, weather updates, Wi-Fi hotspot and full access to Audi’s connected services in particular markets.

What’s more, Audi’s Virtual Cockpit Plus (the digital instrument cluster, which is standard) can be easily configured using the mounted buttons on the Q7’s multifunction steering wheel. It’s a slick system and the graphic resolution is crisp and clear. The Q7 can also be fitted with a head-up display, but again, at an extra cost.

Buyers can also opt for Audi’s Comfort Package, which includes features such as all-wheel steering, adaptive cruise control, swerve assist, efficiency assist and turn assist, as well as 3rd-row seating, which effectively turns the Q7 into a 7-seater. Overall, the Q7’s interior execution is difficult to fault.

In terms of space and practicality, the Q7 has much to offer, with head, shoulder and legroom for 2nd-row passengers being more than adequate. On the optional 3rd row, legroom is a bit tight and the seating position a trifle awkward, especially for adults. The last row’s legroom can be improved by sliding the trio of middle-row seats forward, which is useful. In truth, the 3rd row is best suited for children and prospective Q7 buyers need to consider just how often they’re likely to utilise those 2 rearmost seats.

If the answer is “not very often”, perhaps leave that option box unticked. Still, the pair of 3rd-row seats can be easily folded or flipped up electronically using the button in the load bay and when folded down, the load floor surface is flat and allows access to the full 865 litres of utility space. Should you need to load longer or bulkier items, you can fold the middle row of seats down individually with a maximum load space of 2,050 litres becoming available, which is substantial.

Adaptive air suspension is standard and allows you to lower the vehicle using a load-bay button, which makes it easier to load larger/heavier items. The tailgate is electronically operated and features foot-activated gesture control.

Driving a thrusting turbo-diesel SUV leaves one somewhat satisfied, especially when it’s as refined as this Q7. Under its long and wide sculpted bonnet lurks a 3.0-litre V6 workhorse – the only power-plant currently available for the Q7 in sub-Saharan Africa and it develops fairly healthy outputs of 183 kW and 600 Nm of torque. Those numbers are directed to the tarmac via a buttery-smooth 8-speed automatic transmission and Audi’s quattro all-wheel-drive system. It is fair to note that other engines – especially the petrol, are available but only on grey imports.

The engine and transmission are superbly matched and the driver is always hard-pressed to notice the smooth gear changes. Steering-mounted paddles are used to actuate shifts manually on those spirited runs and you can select the appropriate driving mode using the Drive Select button in the centre console. The models include Dynamic, Comfort, Allroad, Offroad, Auto and Individual, the latter of which allows you to tailor the steering, suspension and engine settings to your preference. With air suspension, the Q7 also adjusts the ride height according to the selected mode.

With a claimed zero to 100 kph time of 6.9 seconds, the Q7 is fairly quick for a Premium SUV that tips the scales at over 2.2 tonnes. The Q7 delivers its performance in such a pleasingly refined manner. The Audi really is an utter pleasure to drive over long distances. The Q7 makes light work of overtaking and its in-gear acceleration – from 80 kph to 120 kph and beyond, if you must, is mightily impressive.

It’s incredible how some manufacturers can make a big chunk of metal, plastic and rubber, of which the Q7 is a shining example, feel like something far lighter and more agile than it is. The Q7 is surprisingly nimble and capable of attacking corners with a modicum of enthusiasm. This increased agility might very well be the result of Audi’s advanced 4-wheel steering – offered as part of the Comfort Package, which the manufacturer claims to offer greater manoeuvrability at lower speeds – which shrinks the turning circle, while improving handling ability at high speeds. As for the Q7’s ride quality, it’s supremely comfortable on both tar and gravel and the Q7 arguably sets the benchmark for ride comfort in this segment…

The Audi Q7 continues to meet expectations in more areas, over-deliver on most, and rarely puts a foot wrong. Expensive, sure, but it is one of the best choices you can make at this end of the market, regardless of the fuel type you prefer. Its styling might be a tad too conservative for some, but the latest updates have undeniably given the Q7 more curb as well as road presence.

The interior is spacious and practical and the cabin can be lavishly-equipped with Audi’s latest technology, provided that you are willing to splurge on the Ingolstadt-based brand’s extensive options list.

In terms of performance, the Q7 performs quite spiritedly – it definitely doesn’t lack punch and, as for its day-to-day efficiency, that’s the cherry on top. The facelifted Q7 is definitely more accomplished than it was in 2015 and the latest updates have ultimately strengthened the Audi Q7’s buying proposition.