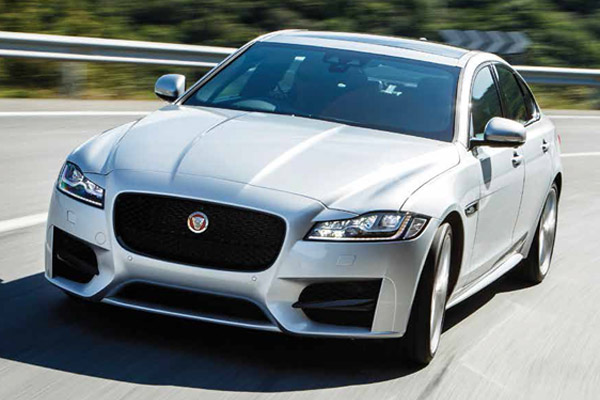 Jaguar has given a lot of attention to the cabin design, paying particular attention to materials, colour palettes, and a new 11.4-inch curved infotainment screen as the car's centrepiece.

As the world increasingly turns away from saloons, some manufacturers are doubling down. The facelifted and updated Jaguar XF range has been unveiled, with the brand bringing only a single variant for the sub-Saharan markets. Jaguar through the local dealer – Inchcape Kenya, is only offering the new XF saloon in R-Dynamic HSE specification.

The XF’s major mid-life update includes a facelifted exterior, new interior, and upgraded technology. Most notable is the refreshed front end, which sees new, slimmer all-LED headlights with ‘double-J’ daytime-running lights and directional indicators, together with a revised front grille and redesigned bumper.

While the exterior changes are subtle, the interior is all-new for the XF – and echoes the interior seen on the recently-updated Jaguar F-Pace SUV. Jaguar has given a lot of attention to the cabin design, paying particular attention to materials, colour palettes, and a new 11.4-inch curved infotainment screen as the car’s centrepiece.

The design is clean, uncluttered, and not particularly minimalist. There’s a judicious use of materials and finishes giving the XF a premium look and feel.

Together with a Meridian sound system, Jaguar has fitted the XF with active noise cancellation – a segment first, according to the brand – while an air ionisation system with filtration helps improve air quality inside.

Ahead of the driver is a 12.3-inch digital instrument cluster with three-dimensional map display, the driver benefits from new safety technology, with 360-degree cameras, a clear exit monitor – for doors opening into traffic, adaptive cruise control, and a driver condition monitor. A ClearSight Interior Mirror can also be optioned, which can be used as either a traditional centre mirror, or can be switched to a video feed from a camera mounted at the rear of the car, if the view is obscured by passengers or luggage.

With new seats and steering wheel, redesigned digital instruments and various bits of haptic switchgear, it’s no exaggeration to say that the changes have dramatically improved the case for the XF. There’s a warmth to the cabin and a simplicity to the much-improved Pivi user interface that the more tech-heavy German alternatives don’t have.

Optional equipment in this car includes wireless phone charging, privacy tint, Jaguar’s activity key wristband, panoramic sunroof and head-up display. Space is generous all round. There’s plenty of room in most dimensions. Front seat passengers sit low, but not awkwardly so, while at the rear, width and legroom are impressive.

The new XF features the marques 2.0-litre ‘Ingenium’ turbo petrol four-cylinder producing 221 kW and 400 Nm. Referred to as ‘P300’, the engine aids the car to every corner utilising an eight-speed torque-converter automatic transmission and all-wheel drive, helping the vehicle hit 100km/h from a standstill in a claimed 6.1 seconds. This is the first-time all-wheel drive has been made available on the XF, locally, and could help steal sales away from the dominant Germans – Mercedes-Benz E-Class, BMW 5 Series and Audi A6, in the luxury saloon car segment.

When it comes to the engine, the four-cylinder petrol Ingenium does an excellent job – especially in comparison to the brawnier inline six that isn’t coming to the XF.

It really feels like Jaguar has hit its sweet spot with the revised XF. It’s beautifully presented, well equipped, and softly comfortable in a way that a lot of luxury saloons seem to have forgotten. While Jaguar often talks about dynamism and performance, the XF P300R-Dynamic HSE isn’t a member of that club – which is great news for anyone seeking a crisply styled modern saloon that places comfort above posturing.

There is more to like about the XF. The cabin stays tranquil at cruising speeds, the active noise-cancellation system that it shares with the facelifted F-Pace helping to reduce road and tyre noise. The Jaguar’s chassis copes well with the abrupt crests and steep slopes – those Kenyan roads throw frequently to luxury cars.

The steering is good, direct and with some proper sensation, and the XF is easy to place on the road and keen holding on its line. Even in wet and slippery road surfaces, the all-wheel-drive system never runs short of traction.

Jaguar has admitted it is unlikely to directly replace the XF – or the smaller XE – so this version will likely live on for as long as there is any demand for it. Jaguar has been building saloons for much longer than it’s been making SUVs, and the revised XF is one of the better ones.

Make your way to Inchcape Kenya and take a closer peek at this fine specimen in motoring excellence.