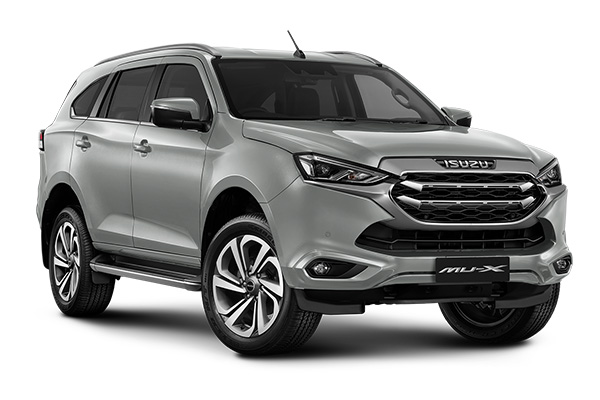 After much speculation and anticipation, Isuzu has launched their new seven-seater MU-X, taking direct aim at the Toyota Fortuner, Ford Everest and Mitsubishi Pajero Sport.

Isuzu probably couldn’t believe its luck with the old MU-X (which oddly stands for Mysterious Utility – eXtreme). Despite being as old as folklore and having to labour with its association to the Chevrolet Trailblazer, it forged a far more devoted fanbase than its American cousin could.

This year, Isuzu’s smash-hit MU-X reaches second generation, with some big improvements for the family SUV.

After much speculation and anticipation, Isuzu has launched their new seven-seater MU-X, taking direct aim at the Toyota Fortuner, Ford Everest and Mitsubishi Pajero Sport. It’s a significant improvement on the outgoing model in every respect. Being an Isuzu, you know exactly what you’re getting in terms of reliability and longevity, and in East Africa, a very reliable after sales service.

Fresh off the boat from the Thai factory from whence the D-Max and Mazda BT-50 also spring, the bare spec sheet is now covered with a lot more meat. It is now ready and poised to take on its competition head on.

Imported from Thailand, it’s based on the all-new D-MAX pickup platform. While the D-Max is fitted with leaf springs at the back, the MU-X is coil sprung, which adds to ride comfort and handling.

It’s a completely new design with the new “World Crossflow” grille and arrow-shaped Bi-LEd headlamps, connected by a signature line to the rear, linking the headlamps with the rear light 3D winglets. Overall, it’s a pleasing look with no big talking points or anything that will offend prospective owners.

All three variations are fitted with alloy wheels with the ONYX on 20-inch, the LSE models on 18-inch and the LS, 17-inch wheels. Where you opt for the ONYX, you have the option of a rim diameter that fits a higher profile off-road tyre to suit the rugged terrain.

The interior cabin is a vast improvement with piano-black surfaces, chrome highlights, aluminium and soft leather in what is a very spacious space. There’s quite a bit of plastic that’s not too obvious or intrusive except inside the glove compartments and centre console where it looks.

The new 7- or 9-inch touchscreen infotainment system has good resolution, with improved functionality when connected to the Apple CarPlay or Android Auto.

As you would expect from a modern car, the new Isuzu MU-X is loaded with technology paired with active and passive safety features, including their Intelligent Driver Assistance System (IDAS) in the ONYX model. This monitors the surroundings with a windshield-mounted stereo camera to act autonomously to avoid a crash or minimise collision damage. This model also features the first middle airbag that prevents the driver’s and passengers’ heads colliding in an accident.

With the third-row seats in use, boot space is up by 25 litres to 311, which is larger than many SUVs. Folding the third-row seat is easy – pull the tapes on the seatbacks and they flip forward and hinge down to create a flat floor and 1,119 litres, 68 more than before. There is also a storage box under the aft section of the floor at the loading lip, which is afforded by the spare wheel being slung underneath.

The new dashboard architecture is far more appealing, with signature air vents on either side of the touchscreen remain that look more contemporary and adventurous, to say the least.

Under the bonnet is the trusted 3.0-litre turbo-diesel that has been refined and tweaked to produce less groan even on full load.

On the entry level LS 4×2, the first thing one notices are the incredibly comfortable seats with superb lumber support that allow you to frolic around corners without being thrown around. The steering wheel is smaller, allowing for a more comfortable and direct drive.

On urban roads, the engine smoothly purrs through the transmission with no fuss, getting up to speeds that you wouldn’t ordinarily want to do with the family on board. Interior noise levels is not intrusive, testament to the improved door-sealing structure and the areas surrounding the A-pillar.

Handling for a big SUV is top notch with very little body roll around corners and sharp bends. Behind the wheel of the ONYX, the advantage of four-wheel drive, easily done with a turn of a dial on the centre console, is apparent with a more sure-footed drive over loose gravel and rocks.

For a standard SUV, the Isuzu MU-X is impressive with its off-road prowess with decent articulation and minimal fuss over some fairly difficult obstacles. With diff lock engaged and the right lines, you have a lot of fun on a weekend 4×4 outing, with the added bonus of 800mm wading depth.

The new MU-X has a lot going for it, including a braked towing capacity of 3.5 tonnes as the brand focuses more on its leisure market vehicles.

In East Africa, the all-new MU-X come with excellent brand and after sales reputation that its rivals can only envy. With all that extra safety gear, improved cabin and dead-set ruggedness, the all-new Isuzu MU-X is a compelling proposition.

Feel free to visit Isuzu East Africa show room, off Mombasa Road in Nairobi or one of the myriad dealer networks spread across the entire East Africa to sample this luxurious SUV that gives you the best of the two worlds: ruggedness and luxury. This is the luxury SUV for Africa roads.