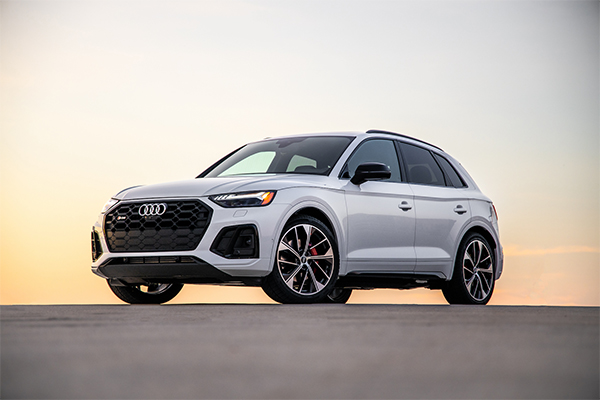 Much of the Q5’s exterior update is focused on the designs of the grille and the lighting signature.

The facelifted version of the executive SUV arrived in Africa last year, sporting a sharper design and revised cabin, but unlike overseas models the Q5 does not receive the company’s new 2-litre diesel engine due to the quality of the fuel.

The Audi Q5 model line-up has been reduced from 11 variants to five, but all three previous engines carry over.

Thanks to its new bumper designs, the overall length of the Audi Q5 has grown by 19mm. Upfront, the SUV receives a wider and more angular grille as well as redesigned headlights, which are optionally available with new generation digital OLED light diodes.

Moving to the back end, Audi’s new ‘digital’ rear lights with OLED technology are available for the first time. These taillights are split into three tiles of six segments each, which allowed designers to create variable light designs that can change in accordance with the driving modes.

Although the cabin of the Audi Q5 retains its familiar look, the old rotary-controlled MMI interface has made way for a new touchscreen infotainment system, measuring 25.6cm across the range. The car’s infotainment hub features ten times more computing power than the previous system, including an advanced voice control system that can access the cloud, putting drivers in touch with a wide array of services and information.

First of all, it’s only a mild facelift. Much of the Q5’s exterior update is focused on the designs of the grille and the lighting signature. Meanwhile, a Q5 Sportback variant has been added to the line-up for the first time; it offers buyers who are looking for a design-oriented SUV another option in the vein of the BMW X4 and the Mercedes-Benz GLC Coupe.

But, to come back to the front-end of the facelifted model, the grille has much more of an RS model design to it, replete with blacked-out hexagonal elements. The headlamps have a new lighting signature and the front air intakes have been revised. The Q5 Sportback, in turn, features a unique grille design so that it can be distinguished from its sibling from the front – not just by the sloping tailgate.

The interior’s updates mostly pertain to the updated infotainment system and revamped centre console, but more on that later…

As aforementioned, all 3 engines that are offered in the Q5 line-up have been carried over from the pre-facelift Q5. The range begins with ‘40 TDI’ models powered by the familiar 2-litre turbo-diesel unit that produces 140 kW and 400 Nm of torque. Incidentally, there seems to be a consensus between the German premium brands that 140 kW is exactly the right amount of power that a 2.0-litre turbo-diesel motor should produce. That peak output – 140 kW, is identical to that of the BMW X3 and the Mercedes-Benz GLC only produces 3 kW more.

The second engine in the line-up is the ‘45 TFSI variant boasting a 2-litre turbo-petrol motor with 183 kW and 370 Nm of torque on tap. Both four-cylinder engines are mated with a 7-speed S tronic dual-clutch automatic transmission – which remains deeply impressive, and quattro all-wheel drive is standard.

The screen that sits atop the dashboard has new software and hardware, which allow it to process requests much faster.

The major update to the interior is the new infotainment system. The new 10.1-inch infotainment system’s interface feels similar to that of new models. It’s faster-acting too – 10-times faster, Audi says, and offers acoustic feedback when you select options from the menu.

The touch integration has meant that the rotary dial that used to sit in the centre console has been removed and replaced with a small storage bin that’s just big enough to accommodate the Q5’s key fob.

You can order your Q5 with a head-up display and OLED lights, which are probably the best lights you can specify – for any car! The OLED lights have a unique display at the rear when you toggle between drive modes. When you select Dynamic, the rear lights display a sportier graphic. Meanwhile, a proximity sensor will cause the brake lights’ illumination to brighten as vehicles draw closer to the Q5’s tailgate.

In terms of practicality, the Q5’s load bay is capacious in both the standard model and its Sportback sibling – 520 and 510 litres, respectively, while the rear seatbacks can be reclined for passenger comfort – or folded completely flat, to free up 1-520 litres of utility space in the Q5 and 1,480 litres in the Q5 Sportback.

If you’re a strictly urban dweller, the first optional extra you should strongly consider, is the adaptive air suspension. It allows the Q5 to smooth out bumps – to the benefit of ride comfort, yet still feel appreciably agile when its driver tasks it to corner quickly. If you like big wheels – the Q5 can be specced with 20-inch alloys, where you get optimal aesthetic appeal without the crunchy ride associated with low-profile rubber.

All Q5 derivatives come equipped with quattro all-wheel-drive, which provides peace of mind when driving on wet roads or going slightly off-road and, with the air suspension, you can raise the ride height to keep clear of any obstacles that might catch on the bumpers. The quattro system also has the ability to decouple from the engine and, by only driving the rear wheels when required, the Q5 uses less fuel.

The Q5 is great for long journeys with a supple ride and confident, stable road holding. You can also specify adaptive cruise control and lane keep assist to make your journeys less taxing on your mind.

The arrival of the facelifted Q5 on African soil truly pains, as Kenya still doesn’t have a local Audi dealership, yet the brand has become so popular on our roads from the grey market. Quattro all-wheel-drive is standard on all Q5s, which is an advantage with our terrain, but the updated model’s standout feature is the pliant ride quality that it delivers in conjunction with the optional air suspension. It gives buyers the chance to specify bigger alloy wheels, which we know African motorists are rather fond of doing, but without suffering the penalty of a harsh ride quality that usually comes part and parcel with the fitment of low-profile tyres.