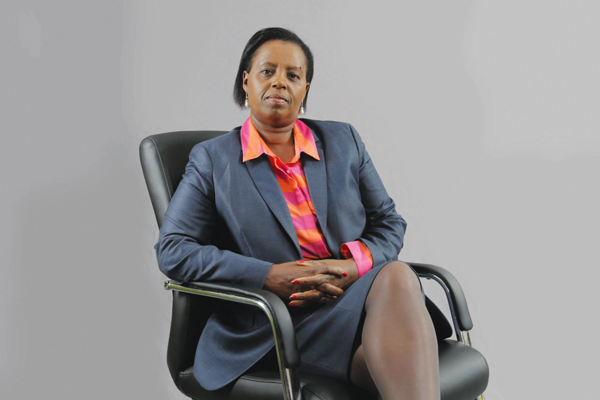 Jane Karuku oversaw a remarkable recovery in EABL’s financial and operational performance in 2021 after a contraction in 2020 attributable to Covid-19 related restrictions and curfews.

Jane Karuku’s distinguished career with East African Breweries Limited (EABL), the largest and most profitable alcoholic beverage company in the region, started in 2014 when she was appointed to serve as a Non-Executive Director. Shortly after in 2015, the seasoned executive was appointed as the Managing Director of Kenya Breweries Limited, EABL’s Kenyan subsidiary. She served in this position for seven years until 2021 when she was promoted to Group Managing Director and CEO of EABL, making her the first female executive to ascend to this position in the company’s 100-year history.

EABL has a diverse portfolio of more than 40 brands that range from beers, spirits, and adult non-alcoholic drinks. It also imports a wide range of international alcoholic brands produced by its majority shareholder Diageo, the British alcoholic beverage maker renowned for global brands such as Johnnie Walker, Guinness, and Smirnoff. Overall, EABL employs over 2,500 people directly and many thousands more indirectly through its vast distribution network. It also has an extensive network that supports more than 60,000 farmers who supply it with raw materials such as barley and sorghum.

As the senior-most executive at EABL, Ms. Karuku has the weighty responsibility of overseeing the Group’s expansive operations and bringing to life its stated ambition to be one of the best performing, most trusted and respected consumer products companies in Africa.

Ms. Karuku oversaw a remarkable recovery in EABL’s financial and operational performance in 2021 after a contraction in 2020 attributable to Covid-19 related restrictions and curfews. EABL grew its net sales to Sh86 billion in 2021, the company’s audited financial statements indicate. This represented a 15 per cent year on year jump from Sh75 billion in 2020. Its noteworthy that the company was in 2021 able to surpass its pre-pandemic 2019 net sales of Sh83 billion, underlining the successful turnaround it was able to achieve over this period.

EABL was able to shake off the effects of the Pandemic in 2021 largely due to the agile thinking that included the launch its own ecommerce platform dubbed “Party Central” to increase reach to consumers.

At EABL, sustainability is chiefly understood to mean the company’s responsibility towards society. The entire value chain from farmer to consumer is regarded and promoted under the motto of “from grain to glass”.

The Group published its inaugural Sustainability Report in 2021, condensing its key sustainability achievements in 2020 and 2021. Some key highlights in the report include a $5 million 10-year fund to help pubs and bars recover from the Covid-19 disruptions. In its bid to impact local communities, EABL also has a bold ambition to source up to 80% of all its raw materials locally.

Ms. Karuku’s success at EABL adds to her long list of achievements in other fields, including the NGO space. Prior to joining EABL, she was the President of Alliance for a Green Revolution in Africa (AGRA) one of Africa’s largest grant-making organisations in the food security and agricultural development sector.

She also served as the Managing Director East and Central Africa at Cadbury’s for 13 years before the chocolate maker was acquired globally. She has had a stint at Farmers Choice and at Telkom Kenya, where she was the Deputy Chief Executive.

She has served on several boards including Absa Bank (formerly Barclays) and is currently a Trustee of United States International University-Africa and Precious Sisters, an organisation that empowers bright and underprivileged girls though education. She is the immediate past chair of Kenya Vision 2030 Delivery Board.

On the values that drive her, Ms. Karuku has stated in past media interviews that discipline plays an important role in her life. “Life has taught me that success is embedded in being disciplined, besides finding the right fit in terms of a workplace and life balance,” she once stated.