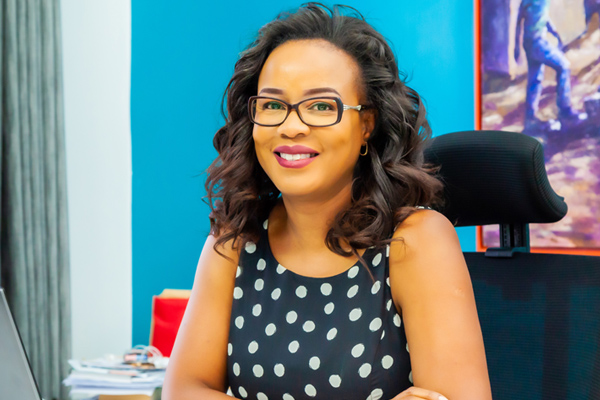 From her second job, Ms Agnes Gathaiya has worked mostly in the tech space and she has always thought that there should be more women at the table.

She has more than 24 years of experience as a transformational business leader in organisational development, focused on developing competitive, operational and business development strategies to drive and sustain sales.

Meet Agnes Gathaiya, the Country Director, East Africa at Google. Agnes’ professional journey at Google started at Loreto Convent Valley Road, a journey that would first take her across the Atlantic Ocean to then Bryn Mawr College (US). Here, she read books and journals between 1993 and 1997, graduating with a Bachelor of Science (BSc) degree in Economics.

Born into a family of 4 children, Agnes quickly learned the values of hard work, integrity, focus and consistency in all her undertakings, from, of course, a very hard working civil and structural engineering father and a family-maker in a mother, who also doubled as a mid-wife, and often worked late on night shifts, only to retire early and take to farming, as a fish would take to water. Her hard-working ethics and late-night shifts training would soon see her easily adapting to a routine of waking up as early as 4 am to tend to her dairy cows, as she brought the rest of the farm to life, for yet, another day.

Brought up a disciplined girl, Agnes immediately returned to Kenya after completing her degree studies in the US. While job hunting, she was fortunate to stumble on Deloitte, a blue-chip accountancy, taxation, auditing and financial services advisory firm where Agnes served good time for 13 years.

Working at Deloitte was God sent as it exposed Agnes to work on assignments in some of the best firms in the country, giving her invaluable and diverse work experience and corporate environments. On these assignments, Agnes worked with many organizations driving transformations that helped them deliver on their mandates while meeting the corporate strategic objectives. She also learnt hands on turn around strategies for firms that were under distress or receivership management.

By the time Agnes was through with Deloitte, she was an Associate Director and Deloitte was one of the most sought-after consultancy firms in its business line by both the private and public sector firms, including donor funded organisations.

Agnes left Deloitte and joined SAP in 2011, first as Public Sector Director but the role quickly changed to Director responsible for all of SAPś Large Enterprise business in the region. The company was scaling up its investments in the region and the role entailed recruiting and training up a team to cover the different industries and territories that were on focus.

Agnes adds, ‘In the first year, we achieved sales growth of 250 per cent and from there, SAP continued to scale up and gain increasing market share by the year.  We also looked at the market and realised that the cost of certification of SAP practitioners was not very accessible and so I pooled together Skills for Africa. I take pride in watching the careers of the first cohort of 100 graduates. The program then was rolled out to other countries.  Working at SAP was gratifying but required significant travel and this was the first point where my work and life as a single mother to a young child clashed. The travel was relentless and I was not spending enough time at home.’

Mid 2014 saw Agnes resign from SAP and sit at home for 6 months to nurture her young child, in order to give the child a sense of security and love that was very much needed at that time. She says, ‘My career decisions from then on took this into account and so I only worked for organisations where the furthest I was expected to travel for work was Kisumu or Mombasa.  The roles, however, remained challenging and pushed me to grow both as a leader and as a person.’

Agnes then briefly joined Chase Bank (now SBM) for just over a year as General Manager in charge of the public sector, before moving on to Safaricom as Head of Enterprise Sales for the Small and Medium Enterprises in July 2016. Agnes says this of the Safaricom tour of duty, ‘The best part of this job was the time I spent in all parts of the country meeting with SMEs and finding out what was important to them and then translating this to products that added value to them. My team truly believed in transforming small businesses and I guess that is why we were successful.  It was gratifying work to change lives so visibly.’

In February 2018, Agnes joined Pesalink – Integrated Payment Services Limited as CEO after being headhunted to lead the newly launched banking service. According to Agnes, the remit was to commercialize and monetise the investment that the banks had made in the instant payment switch.

During the 3 years as CEO, ‘were able to create trust among all the stakeholders including the regulator, the banks and our customers.  My team made it easy for me to get up every morning as they were driven and motivated to see the platform become a household name and provide affordable, real time payments.  The idea was novel and had barely been implemented around the world and so, there was no rule book,’ states Agnes with a cheeky smile.

In her present job, Ms Gathaiya states, ‘Today at Google, we have a mission to organise the world’s information to make it accessible to everyone. Indeed, since I arrived here in the thick of the COVID-19 pandemic in August 2020, we have worked on ensuring that we leverage our tools to ensure that we contribute towards the economic recovery of the region and indeed Africa. Working with businesses to help them pivot. This is something all businesses have been told they must do…go digital or die.  Google gives them the ‘how’ to successfully do this and we have over 300,000 businesses across Africa that we are working with to digitise and provide online presence.’

Google has also invested significantly in the most vulnerable groups including recently launching a women and children fund.  These and other initiatives take up a part of Ms Gathaiya’s time.

Most of the time, however, she spends leading a team that helps corporates to be more visible, acquire customers and manage existing ones using Google’s many advertising platforms.

Ms Gathaiya opines that she has worked in many different sectors but the theme that connects them all is that she is a commercial leader helping companies align their internal resources to serve their customers by creating value that transforms their businesses and lives. Ms Gathaiya believes in building great teams and keeping them motivated. She also believes in keeping the customer in mind in everything that her team is involved in.

Her main concern during her career is finding herself quite often as the only woman in the room or one of a very few.  From her second job, Ms Gathaiya has worked mostly in the tech space and she has always thought that there should be more women at the table.  Mentoring and coaching is therefore very important to her.  Towards this end, she co-founded Hernovation which looks at growing women tech managers into organisation leaders. This they do by ensuring the mentees are equipped with the soft skills required including mentorship, public speaking, how to develop strategy, how to read and analyze company accounts among other important skill set.

Ms Gathaiya is part of a small group of women who set up a talk shop called African Women in Fintech and Payments that currently boasts of a membership of over 200 women.