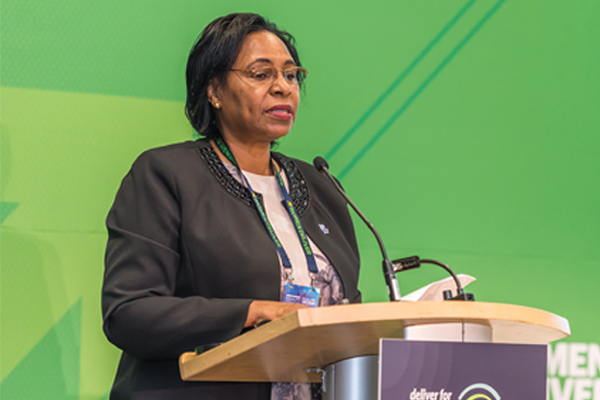 Prof. Margaret Kobia was appointed to Cabinet in January 2018 to serve in the Ministry of Public Service, Youth and Gender. Widely referred to as “the guru of public service”, she provides policy direction and leadership to the Ministry’s mandate that includes public service reforms, transformation and service delivery; and gender equality and women empowerment programming.

More than in her current position as Cabinet Secretary, Prof. Margaret Kobia has distinguished herself as a leader in corporate reforms and institutional transformation, most of which have impacted business in Kenya, through the establishment of good corporate governance practices that now permeate state owned enterprises and spilling over to the private sector, thanks to the establishment of the Kenya School of Government.

Upon her appointment as Director/CEO of the then Kenya Institute of Administration in 2005, she embarked on a modernization program of the institution. During her tenure, she provided institutional leadership in public service excellence when the institution was ranked in the excellent performance category for four years in the external evaluation of performance contracting.

Prof. Kobia engaged staff in futuristic vision development for the Kenya School of Government that translated the vision to a transformation strategy owned by staff. She stands out for combining strategy implementation and leveraging institutional networks with public sector organizations to increase enrolments in training programs and total turnover. Total revenue nearly tripled from Ksh 215 million in 2005 to approximately Ksh 600 Million by 2011.

With improved internal revenue, the institute was reclassified as a self-financing State Corporation from one that was dependent on the government for its budget. The institution ploughed back revenues into capital development investments, enabling expansion and modernization of its training facilities and related infrastructure. These included putting up a new administration block at a cost of Ksh 400 Million, a new conference centre at Ksh 400 Million, the Habel Nyamu Centre for Lectures and Staff Offices at Ksh 400 Million, and Margaret Kobia Executive Hostel Complex at Ksh 800 Million.

To date, the former Kenya Institute of Administration (KIA) has been transformed and is the Nairobi campus of Kenya School of Government, and serves as an outstanding reference in public sector transformation in the country.

The Kenya School of Government, thanks to Prof. Kobia’s vision, now serves as a modern leading national Management Development Institute (MDI) serving many countries in the East African region.

Upon her appointment as the Chair to the Public Service Commission (PSC) in 2013, Prof. Kobia embarked on a transformation of the operational systems of the commission. She instituted and implemented a functional reform to enable PSC operate as a human resource (HR) regulator, appellant and oversight in the public service.She led a process of business process re-engineering and restructured business operations, increasing operational efficiency and effectiveness.

Prof. Kobia’s tenure saw the completion of the PSC transition from mainstream Civil Service to an Independent Constitutional Commission. It is during her tenure that human resource policies and guidelines were developed and launched. In 2016, she spearheaded the review of the Public Service Commission Act 2012 to the more comprehensive PSC Act 2017 that conforms to the expanded functional and operational scope of mandate in the Constitution.

Other notable contributions through board memberships where Prof. Kobia has been invited to serve and continue to provide guidance on transformation of corporate of corporate governance and academic programs include: St. Paul’s University where she serves as the Chancellor since 2018, AMREF International University where she serves as Council Chair, UN Committee of Experts on Public Administration (CEPA) where she is a Committee member.

In 2017, she was nominated by the United Nations Secretary-General and appointed by ECOSOC to serve on CEPA for a four-year term. The appointment to CEPA was in recognition of her wide experience and contribution to practice and scholarship in the field of public administration in Kenya and globally.

Prof. Kobia is Vice President of the Commonwealth Association of Public Administrative and Management (CAPAM).

Before these appointments, Prof. Kobia served on the Judicial Service Commission (JSC) as Vice Chair between 2013-2018 and Kenya Accountants and Secretaries National Examinations Board (KASNEB) where she served as Chair between 2015-2018. It is during this time that KASNEB revised the curriculum and examination system for accountants and oversaw the construction of a new institutionally owned KASNEB Towers worth Ksh 1.2 Billion.

Prof. Kobia also serves on the Kenya College of Accountancy (KCA) University Council as a member.

Prof. Margaret Kobia is a full Professor of Management and Entrepreneurship. She was appointed to Cabinet in January 2018 to serve in the Ministry of Public Service, Youth and Gender. Widely referred to as “the guru of public service”, she provides policy direction and leadership to the Ministry’s mandate that includes public service reforms, transformation and service delivery; and gender equality and women empowerment programming. The Youth mandate has since been hived from the docket.

Prof. Kobia is a Fellow of the Kenya Institute of Management and of the Institute of Certified Public Accountants of Kenya.

Prof. Kobia has served as senior lecturer and researcher in management, entrepreneurship and research methodology at the Strathmore University, where she taught undergraduate and graduate students between 2003 and 2005.

Prof. Kobia also served as a management training consultant at the Institute of Leadership and Management, Strategic Leadership Centre, Nairobi and Institute of Personnel Management, Nairobi. The quality of her graduates from the university distinguished themselves in their areas of expertise in the world of work.

Prof. Kobia’s work has also received international professional recognition from her peers. Among her international fetes include:

• 2010: Winner of the Commonwealth Association of Public Administration; Gordon Draper Award for strong leadership and outstanding contributions to improving public administration in the Commonwealth.
• 2011: Awarded for dedication and contributions to Management in the Public Service by the International Who is Who of Professional and Business women of American Biographical Institute.
• 2012: Research Grant on Initiatives to Support the Growth of MSMEs in Kenya Project: Research Investment Climate and Business Environment (ICBE) Funded by Trust Africa.
• 2014: Africa’s Most Influential Women in Business and Government – Regional and Country Winner Award in the Services Category for Kenya and East African Region. June 2014 by CEO Communications.
• 2019: Distinguished Alumni Award from the University of Illinois, Urbana-Champaign.

Prof. Kobia is a Ph.D. holder from the University of Illinois, Urbana Champaign US, from where she graduated in 2003. Her studies in Human Resource Education and Management were sponsored by the United Methodist Church of US. She had previously attained a bachelor’s degree in 1981 and a master’s degree, all in Education in 1991 from Nairobi and Kenyatta Universities respectively.

An accomplished researcher and author, Prof. Kobia has written a myriad of academic and journal articles many of which have been published in peer reviewed journals. Her topics of interest range from Public Service Transformation, Human Resource Management to Youth and Women Empowerment. Some of the organizations she has researched and written academic and professional papers for include: Parliamentary Service Commission, Conference of African Ministers and Public Service (CAMPS), UNDP, Conference of African Association for Public Administrators and Management (AAPAM), World Bank, UNESCO, DfID among others.

In 2011, she was appointed Editor of African Journal of Public Administration and Management (AJPAM). The refereed journal is a resource for researchers and practitioners in public administration on the continent.

To date, Prof. Kobia supervises and mentors PhD scholars from various Kenyan universities in her area of specialty of Management and Entrepreneurship.

Prof. Kobia has a set of beliefs that are evident in her work ethic. The following are some of the principles that manifest themselves in her work:

• Setting goals and having SMART targets for every project she embarks on. She is adept at keeping timelines and accomplishing the goals she sets out to achieve.
• She advices her teams to choose two to three clear and impactful targets. It is enough to concentrate on a few targets that one does well in.
• As a leader she says her role is to set a vision and build a team that is alive to the vision and motivated to make the vision a part of their tasks and accomplish them.
• As a leader her role is to bring out the best in each of the players and facilitate them to achieve their excellence. Each player should stay focused on the shared vision and ensure they play their role in the realization of that vision.
• A leader should never be threatened by the excellence of her team but should always ensure she attracts the best and facilitates them to realize their best outputs.
• A leader ensures that her team is empowered and gains the requisite skills as they accomplish their respective tasks. This approach ensures sustainability and scalability of whatever program they are working on. It equips workers with skills that they can use in similar programs in future assignments.
• Public service is a calling. One can only excel as a leader in public service if their leadership is value based. Leaders must embrace fundamental ethical values such as transparency, accountability, respect and hard work. In public service these are ingrained and practiced as cultures and traditions.