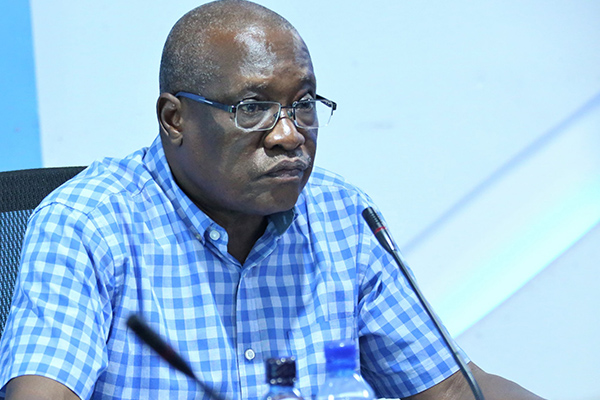 Under Gen. (Rtd) Joseph Kibwana's watch, the KPA has put in place policies that promote prudent financial management to ensure financial sustainability at all times.

CHAIR OF BOARD: KENYA PORTS AUTHORITY

The Strategic Plan sets out clear port plans, developments, and targets for a period of five years while the Master Plan is a long-term document that aims to build all ports development into the future.

“Development of the Strategic Plan was informed by a systematic and consultative process involving both internal and external stakeholders, with the board providing vital strategic guidance in shaping the vision for the KPA. The plan has been developed at a critical time when the country is focusing on harnessing the potential of the blue economy to support economic growth while ensuring environmental sustainability of the oceans for the future generations,” the Gen (Rtd) says.

Under his chairmanship, the KPA board has given management the necessary support towards implementing key transformational projects and programmes as outlined in the Strategic Plan including among others; Customer Engagement Centre, Capacity Expansion, SGR related initiatives and the Blue Economy initiatives.

Some of the strategic initiatives witnessed during his reign include the ongoing construction of Kenya’s second commercial Port in Lamu, the development of small ports, inland waterways and ICDs. The development of Lamu Port which is a major component of the Lamu Port South Sudan Ethiopia Transport (LAPSSET) Corridor project has gained momentum following the completion of the first of the three berths earmarked for the first phase.

The remaining two berths are expected to be completed by October 2021. Similarly, significant progress has been registered on the development of Shimoni Fishing Port. The project is forecasted to improve the country’s fishing industry as more cold storage facilities shall be availed.

Elsewhere in Kisumu, the residents are expectant of the restoration of the once vibrant facility following KPA’s investments towards its rehabilitation. Under the Chairmanship of Kibwana, the KPA board has continued to closely monitor the implementation of all these projects.

“To ensure successful completion of the projects, the board and management hold half yearly review meetings. During these meetings, the board receives and reviews progress reports from the managing director, indicating overall progress made on key strategic objectives and initiatives,” says the Chair of board.

The Gen (RTD) military background and wealth of knowledge and experience also saw him become the Chair of Kenya Trade Network Agency (KenTrade), playing a vital role in beefing up and speeding the automation of key cargo processes and integrated security systems (ISS) at the port.

It was under his watch between 2005-2008 that management got support for resources which enabled KPA invest in modern equipment and automation, making the Port competitive globally. Gen (RTD) has also served as a non-executive director on the boards of KCB Bank Group (2012- 2017), KCB Bank Burundi (2013- 2015) and as the chairman of KCB Bank South Sudan up to June 2020.

The Port of Mombasa has continued to feature and remain among the top five Ports in Africa in container ranking after Port Said (Egypt), Port of Alexandria (Egypt), Tanger Med Port (Morocco) and Port of Durban (South Africa). Mombasa Port is ranked among the top 120 globally and is the only Port in the East of Africa to appear among the top ranked container Ports.

Besides chaperoning the business interests of the KPA, Kibwana’s board effectively oversights management to ensure that KPA creates social value to the community the port operates in through an impactful engagement that is entrenched in and supported by the Corporate Social Investment (CSI) Policy. Towards this, KPA allocates two percent of its profits to strategic needy causes that enhances the environment and the people.

Gen. (RTD) Kibwana is the patron of St. Thomas Girls Secondary School in Kilifi County, among other social responsibility initiatives that he undertakes. The year 2020 was one of the most challenging for many corporate organizations including KPA due to the outbreak of the global Covid-19 pandemic. As the board chair and through the board risk and audit committee, Kibwana provided the much-needed oversight that steered KPA through challenges brought about by the pandemic.

Under his watch, the KPA has put in place policies that promote prudent financial management to ensure financial sustainability at all times. Key among these policies is ensuring that the KPA has a procurement unit that adheres to the Procurement Act and regulations while bench marking with the best global practice. These includes approval of annual procurement plans and budgets and periodic review of the same.

On internal controls, the board established an Enterprise Risk Management Framework (ERMP). This entails oversighting all matters risk and how to mitigate them. In addition, the board through the board audit and risk committee (BARC) receives quarterly financial and operational reports for action.

In August 2020, H.E President Uhuru Kenyatta issued Executive Order No.5 of 2020, which provided for the Framework Agreement that provided for the establishment of a seamless and coordinated national transport logistics network called the Kenya Transport Logistics Network (KTLN), bringing together Kenya Ports Authority (KPA), Kenya Pipeline Company (KPC) and Kenya Railways Corporation (KRC) under the coordination of the Industrial and Commercial Development Corporation (ICDC).

Gen (Rtd) is a member of the board of ICDC, which is responsible for providing the overall guidance to the boards and management of the operating entities (OEs). Meet Gen. (Rtd) Joseph Kibwana, the man with the rare feat of being appointed twice to the covetous seat at the country’s strategic parastatal KPA.

He was first appointed and served 2005-2008 and re-appointed after a ten-year hiatus in June 2018 and has been serving as the chair of board to date. Kibwana is a career Naval officer and rose through the ranks up to his retirement as a General in 2005.

He has seen duties in a number of positions of honour, and history was kind to him when he presided as Chief of General Staff of the Kenya Armed Forces between 2000-2005 and oversaw the transition from one President to another, the late President Daniel Moi to former President Mwai Kibaki. He is an alumnus of the Britannia Royal Naval College (UK), Faraday House Engineering College (UK), the US Naval Staff College and the US Naval War College.