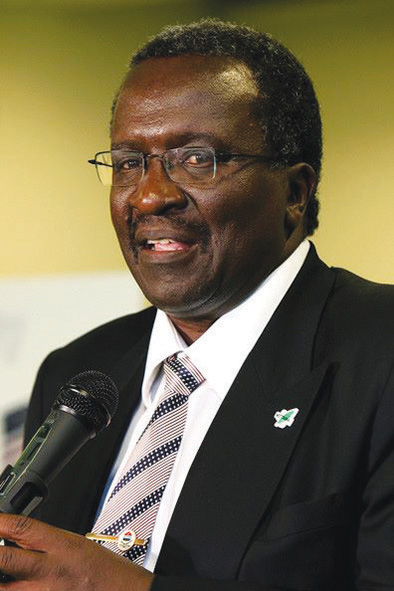 From 2003 to 2009, Amb. Awori served as the Ambassador of the Republic of Kenya to Japan and Korea. During his tenure, he opened a new Embassy in South Korea and built strong relations between Kenya and the two countries, especially by promoting trade and industry through the respective private sectors institutions, in keeping with Kenya’s new focus on economic diplomacy.

CHAIR OF BOARD AND COUNTRY DELEGATE: CFAO

Amb. Awori is the chairman and country delegate of CFAO Kenya since 2017, in addition to sitting on the board of directors of CFAO Group, a French conglomerate wholly owned by Toyota Tsusho Corporation with subsidiaries across the sub-Sahara Africa.

The CFAO Group is in 35 countries in Africa and does business in another 19 countries through independent dealers and distributors. Other than being prominent in the motor vehicle sector, CFAO operates in four business domains, namely mobility; healthcare; fast moving consumer goods and agriculture and technologies; renewable energy and infrastructure.

Among the turnkey projects TTC have been able to bug through Toyota Tsusho East Africa is a $1.5 billion investment in agribusiness in Kenya and the region in the form of developing farm machinery through its franchise arrangement with Case IH, a global agricultural equipment manufacturer.

The other project was the investment in the construction of a fertiliser factory at a cost of $1.2billion. These two projects earned Amb. Awori the tag name, the man from Japan!

Other chairmanships include, Carbacid Investments Plc, Bank of Africa Kenya, Jumbo Chem, and MG. Dennis other directorships include East African Cables Plc and several other small ones.

At the turn of the century, the private sector in Kenya was beginning to organise itself in a more inclusive and purposeful way, and as part of its evolution the Private Sector Forum was formed – a predecessor to the Kenya Private Sector Alliance (KEPSA).  Dennis was among those who was elected to serve on its board, and he became its chairman. It was while serving in this position that he was appointed ambassador, and so he was forced to leave his advocacy on behalf of business to others.

However, once back from his stint as a diplomat (correction, Dennis is always the diplomat!) he swiftly re-engaged with those who were now working to create a more enabling environment for the private sector within the emerging new and much more comprehensive body, KEPSA. He was its founding vice chairman and later its chairman. He later became the founding chairman of the KEPSA Foundation and he has also been a trustee of the Kenya National Chamber of Commerce and Industry.

I started working under Bruce McKenzie, the chairman of the board of CMC Motors, as his PA, but five months later, he died in that plane incidence. He informed a great deal of my professional life; also, his son was my best friend. My father is also a great influence; from him I learned the power of communication but also the value of respect. Dad treated everybody equally and with respect no matter who you were in society. I have always strived to do the same.

Of bearing a prominent surname and what comes with it, in an interview with Business Daily, Ambassador (Amb) Dennis Awori stated that while a prominent family name is prominent, can help one through numerous doors, it is limiting, in the same vein. He stated then, ‘It might have opened doors yes, but it commands a huge responsibility as well. People expect more from you, so you might get through the door but if you can’t deliver, it might be a problem’. Amb. Awori added, ‘Getting through the door is the easy part normally. Also, I can’t be anonymous. I can’t go somewhere and stay anonymous.’

From 2003 to 2009, Amb. Awori served as the Ambassador of the Republic of Kenya to Japan and Korea. During his tenure, he opened a new Embassy in South Korea and built strong relations between Kenya and the two countries, especially by promoting trade and industry through the respective private sectors institutions, in keeping with Kenya’s new focus on economic diplomacy.

In public service, he was appointed to the New Partnerships for Africa Development National Steering Committee in 2010. Prior to these, Amb. Awori served on the Board of the Communications Commission of Kenya now the Communication Authority of Kenya (2001-2004) and participated in the establishing of the regulatory framework for the telecommunications, mobile telephony and courier industries in the country.

Amb. Awori has served on the boards of Kenya Vision 2030 Delivery Board (2013 and 2018) a governmental organization in charge of the vision and long-term development plan of the country during which time he chaired the Economics and Macro Committee of the Board, which was responsible for providing technical support to the overall board. Between 2015 to 2016, Amb. Awori served as Chairman of Kenya Airways, the national carrier.

He holds a BSc degree in Aeronautical Engineering from the University of Manchester in the United Kingdom (UK). Other academic achievements include a business leadership program at Ashridge Management College, and a management development program from the Emory Business School of Atlanta in the United States of America (US).

Amb. Awori is a keen sportsman and represented Kenya and East Africa at Rugby events in the 1980s, as well as chaired both the Kenya Rugby Union and the Uganda Rugby Union in consecutive terms. He has also been a member of the Rotary and is a past president of the Rotary Club of Nairobi East.

In December 2020, Dennis was awarded by the government of Japan through HE the Amb. Horie Ryoichi, the Japanese Ambassador’s Commendation in recognition for his contribution to the promotion of mutual understanding, friendship building strong relationships between Japan and the Republic of Kenya.

Maybe we can explain his success through his personal mantra, which is to “work hard, stay focused and whatever you do, keep it simple”. Plus, as all who know him will attest, this jovial family man, this gentle giant, is an exceptionally polite and humble chair of board.