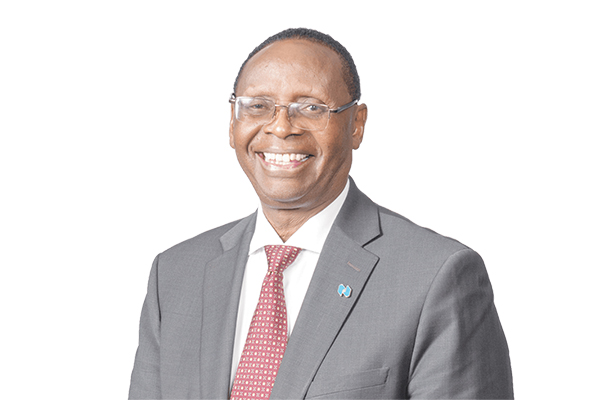 Wilfred has a wealth of experience in the corporate world and has previously served on the boards of blue-chip companies and leading institutions, both locally and internationally.

CHAIR OF BOARD FAMILY BANK OF KENYA AND NATION MEDIA GROUP

Dr. Wilfred David Kiboro holds a Bachelor of Science (BSc) degree in Civil Engineering from the University of Nairobi (UoN). He retired from Nation Media Group (NMG) as the Group Chief Executive Officer on 31st October 2006 after working for the Company for thirteen years.

Dr. Kiboro returned home to NMG upon his appointment as a non-executive director in December 2006, becoming the Chair of the Board in September 2009. At NMG Dr Kiboro sits on the Nomination and Governance Committee.

Dr Kiboro was awarded an honorary Doctor of Philosophy (PhD) degree by Kenyatta University in December 2015.

He is the distinguished Chancellor of the Riara University and also Chairs the Board of Family Bank and Wilfay Investments, a family-owned enterprise (FOE). The Family Bank of Kenya is one of the rapidly expanding and customer-centric in Kenya.

Wilfred has a wealth of experience in the corporate world and has previously served on the boards of blue-chip companies and leading institutions, both locally and internationally. These include on the board of East African Breweries Limited (EABL) Standard Chartered Bank (SCB) Kenya, Kenya Association of Manufacturers, Rhino Ark and the National Environment Management Authority (NEMA).

At NMG Dr Kiboro has been a key player in media development across the EA region. Together with other media luminaries like Dr SK Macharia and lawyers Paul Muite and Dr Gibson Kamau Kuria and others, Dr Kiboro was on the frontline clamour for media freedom; for the liberalization of the airwaves and for the widening of the democratic space. Thanks to his leadership of this group, Kenya now enjoys hundreds of broadcast radio and television stations and a vibrant ICT backbone and infrastructure.

Today, the pan African spirit in Kiboro continues to anchor the AU Agenda 2063 on democracy, rule of law, ethical governance practices, good governance, inclusivity and improved human rights. To this end, Dr Kiboro continues to bring together government leaders, scholars, professionals, politicians, scientists, the youth and so on, through the Kusi Festival of Ideas, to progress and prosecute the Africa agenda 2063.

Nearer home, with our cycle of elections every five years, Dr Kiboro has always constituted a team of concerned Kenyans who bring sanity in the run up to the elections, preaching for peaceful campaigns devoid of violence, and a peaceful, free, fair, transparent and credible elections. In 2022, working under the aegis of Group of Concerned Kenya Initiative, Dr. Kiboro is working with Lt-Gen (Rtd) Daniel Opande as chairman and Florence Mpaayei as member, in asking the political leaders to commit to peaceful campaigns, to stem the tide of the cycles of electoral violence in the country.

His most impactful CSR engagements include several environmental and humanitarian efforts during his tenure at NMG, two key ones being the launching of the Aberdare Forest Fund in 2002 to erect over 400 kms electric fence around the forest to protect the critical water tower, together with other members of the Rhino Ark Board. Dr Kiboro is also credited for the launching of the Nation Turkana Relief Fund in 1999/2000 with other media owners, an appeal that rallied all the private sector players to help cushion the effects of one of the worst food shortage disasters to hit our shores.

In the company of environmental stalwarts like Nobel Laurette winner the late Wangari Maathai, Wilfred unleashed the power of the media, as the public watchdog and national agenda setter to reclaim parts of the Karura Forest and the Nairobi Central Park from then ferocious land grabbers.

As the Chancellor of the Riara University, a new centre of higher education that boasts a modern Law, Business and Media Schools, with well-equipped library with e-learning and a modern media studio, this young University has rapidly become the University of Choice for under graduate studies who opt to study locally.

Among the major national, pan-Africa and global awards bestowed on him is the Honour of the Elder of the Order of The Burning Spear (EBS) by HE The President of Kenya, in recognition for his selfless service to the country in numerous capacity and leadership roles. Dr Kiboro has also been inducted in the Leadership Shines Through–Africa and the ICT Hall of Fame–2007 Lifetime Inductee.