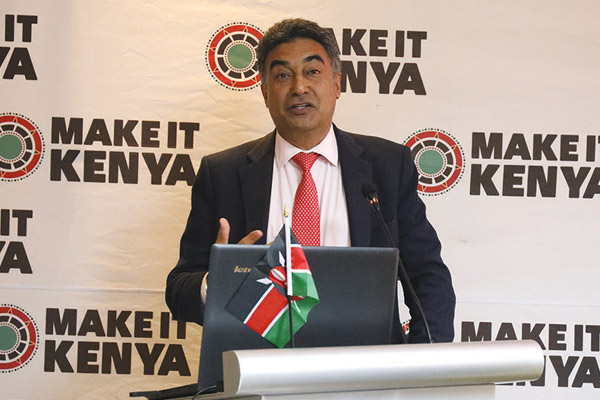 In 2019, EPC and Brand Kenya merged to form the Kenya Export Promotion and Branding Agency (KEPROBA), with Jas as the inaugural Chairman, where he serves to-date, continuing to promote the expansion of Kenya’s export revenue and steering the vision to transform Kenya to become a top global brand.

CHAIR OF BOARD KENYA EXPORT AND BRANDING AGENCY

Why was Jas Bedi awarded first an MBS and then an EBS, both highest recognition honours by the President of Kenya? It is because wherever he goes, whatever he does, he is a person of influence. He is a leader in thought and in action, someone who always expects to Make a Difference – or as he expresses it, to be “MAD”.

If we look at Vision 2030’s aspirations to make Kenya a truly middle-income country of shared prosperity, if we buy into The Big Four of the present government, with its emphasis on manufacturing as one of its pillars, then few of our leaders are such role models for helping us to have our dreams become our reality.

Jas launched his post-UK graduation career as a textile technologist in 1984, on the shop floor of his family business Bedi Investments, which had just invested in a textile mill but had no technical expertise to operate it. Despite being a fresh graduate, the family entrusted him to take the reins of a business that possessed insufficient resources to hire expatriate technical managers.

He clearly remembers that day in July 1984 when he was thrown in at the deep end and told to dye navy blue blazer fabric. It turned purple and bled as a result of an absence of dye fixation. This was how he first realised that what you learn in university is not always useful once you reach the factory floor. It was an embarrassing moment he vowed not to repeat ever again. Thereafter, there was no turning back, and Jas backward integrated the entire factory in 1987, to introduce the kind of spinning that would allow the company to enhance its quality standards and effectively compete on the world stage. His dream was that the full value chain investment would complete the flow “from fibre to fashion”.

However, with the influx of second-hand clothing – mitumba – in the late 1980s, this reality was short lived, as it hurt the entire textile sector. The government decided to liberalise the economy, bringing cheap subsidised new and used clothing and making it so very difficult for the sector to sustain its competitiveness. Jas took a position that one had to export or perish, and the company’s initial exports were to Zimbabwe in 1987.

Thereafter, their products reached the entire region, benefitting from Kenya’s competitive advantage of being duty free under the trade preference programme that was then called the Preferential Trade Area (PTA)

This became the turning point in Jas’s determination to grow the company’s exports using trade agreements to his advantage, and today his company exports to the UK, the EU and America, under the AGOA and COMESA arrangements. The newly evolving opportunity under the Africa Continental Free Trade Area, AfCFTA, provides a major new opportunity.

Jas realised that to attain his dream of “export or perish” he needed to lobby government to promote favourable market access, both regionally and beyond, to give the company and others a competitive advantage. He therefore joined the board of the Kenya Association of Manufacturers (KAM), where he immediately began to Make a Difference (MAD), as a result of which he became the Chair of the Board committee for regional exports to the EAC & COMESA. He also became a director of the Federation of Kenya Employers (FKE), to influence policy for stimulating labour productivity – crucial to his family business, which was both labour and capital intensive.

The family business expanded from synthetic to natural cotton fibres to expand its product offering through the acquisition in 1996 of government parastatal East African Fine Spinners Limited, spinning cotton yarns and making sewing threads used in the clothing industry.

Meanwhile, the export business was diversified to supply “back to school” in the UK, with the model evolving to include intermediate goods, textiles in the regional and finished clothing to the UK and the EU, where the high cost of labour precluded garment production. The ‘Mitumba’ menace meant he operates the business away from fashion and thereby the switch of business model to “fashion free recession free” by opting to do production of uniforms for both disciplined forces i.e., Police, Military and Prisons within the region and back to school for both domestic and export to the UK.

As Managing Director of Orbit Chemicals, a Fast-Moving Consumer Goods (FMCG) company between 2003 and 2006, Jas leveraged on his vast knowledge of the regional export business that Orbit Chemicals so badly needed due to its huge production capacity that was far beyond what Kenya could absorb. Jas transformed the business model to contract manufacturing, appreciating that competition with multinational corporations (MNCs) would be difficult. He, decided to complement Orbit Chemical’s manufacturing facilities by producing global brands for the MNCs.

The position of MD in the FMCG space gave Jas wide experience in operating in multiple sectors, culminating in his appointment in 2003, as an independent non-executive board member at the Export Promotion Council, where he served for 3 years. In 2006 he became a director of the Export Processing Zones Authority, serving for two terms of three years each, making a total of 6 years.

In 2014 Jas expanded his manufacturing beyond Kenya by entering Uganda, becoming active in the Cotton Textile Apparel (CTA) sector, adding value to 10% of Uganda’s cotton production “from field to fashion”. His factory, Fine Spinners Uganda, currently contracts 16,000 small holder cotton farmers, and employs 1,600 employees in the Kampala factory alone, running another fully vertically integrated CTA pipeline manufacturing cotton T-shirts for the region and for the EU and America.

Besides his positions on the boards of state-owned enterprises (SOEs), Jas became the inaugural chair for The African Cotton and Textile Industries Federation (ACTIF) in 2005. This was a pan-African CTA lobby group representing 26 sub-Saharan African countries that lobbied for the extension of AGOA, which allows duty-free and quota-free access from sub-Sahara Africa to the US. Jas personally attended two US congressional hearings on this subject. Jas also chaired the Kenya Apparel Manufacturers Exporters Association (KAMEA) from 2003 until 2010, housed under the umbrella of KAM.

Jas became Chairman of KAM in 2010 for a two-year term, following which he rose to be a Governor of the Kenya Private Sector Alliance (KEPSA), then graduating to becoming a director and now then Vice Chairman in 2021.

Jas continued to serve regionally and globally, as a board member of the East African Business Council (EABC) in 2014. In 2016, he became the first African President of the 110-year-old global textile federation, the International Textile Manufacturers Federation (ITMF).

Given his unique multi-sectoral experience in manufacturing and lobbying that gave Kenya, and more broadly Africa, duty free and quota free market access, Jas was appointed as Chairman of the Export Promotion Council (EPC) in 2016 for a 3-year period, to contribute to enhancing Kenya’s exports and reducing our balance of trade deficit.

Recognising his tireless contributions to diversifying Kenya’s export basket and markets, he was also appointed as a board member of ICDC, which now oversees the Kenya Transport and Logistics Network (KTLN), where Jas chairs the Logistics and ICT committee, overseeing the masterplan of implementation in the network co-ordinating Kenya Ports Authority (KPA), Kenya Railways Corporation (KRC) and Kenya Pipeline Company (KPC).

In 2019, EPC and Brand Kenya merged to form the Kenya Export Promotion and Branding Agency (KEPROBA), with Jas as the inaugural Chairman, where he serves to-date, continuing to promote the expansion of Kenya’s export revenue and steering the vision to transform Kenya to become a top global brand. KEPROBA’s simply worded mission is to “Brand Kenya, Export Kenyan and Build Kenya”.

Jas continues to expand Kenya’s market access in multiple export markets, wherever Kenya enjoys a competitive or comparative advantage through duty free and quota free market access. He has also lobbied against non-tariff barriers (NTBs) in non-traditional markets such as China, India, Russia and Southeast Asia, where there exists huge market potential for Kenya agricultural produce.

Jas is a member of the Young Presidents Organisation (YPO), which comprises over 30,000 global CEOs globally, and he continuously refreshes his learning with executive education at major global institutions including Harvard Business School, IMD and IIM. His inclusion in this list of 2022 Business Monthly East Africa Top 25 Most Influential Chair of Boards is earned and so well deserved.