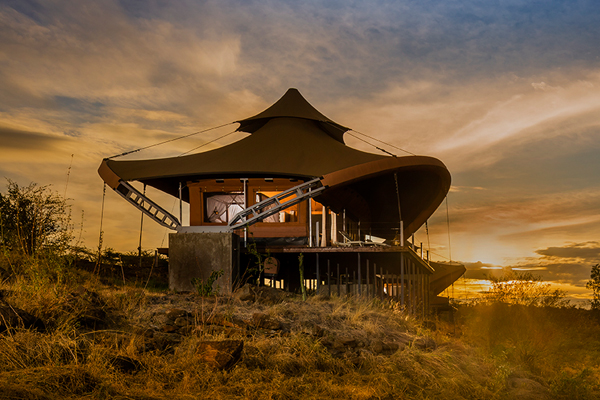 Mahali Mzuri is a beautiful property of Virgin Limited Edition and was recently named the best hotel in the world.

THE BEST HOTEL IN THE WORLD

According to expertafrica.com, the polished all-inclusive Mahali Mzuri lodge is enveloped by the savannah in the Olare Motorogi Conservancy, some 28 km from Mara North Airstrip and 48 km from wildlife at Maasai Mara National Reserve.

Included in the offerings are super refined permanent tents, with free Wi-Fi and living areas, plus minibars, and tea and coffeemaking facilities. All the accommodation feature claw-foot baths, plus terraces with savannah views. Some include 4-poster beds.

For out of your world experiences, meals and drinks, and game drives are included. There is a bar, a lounge and an open-air restaurant, as well as a spa and an infinity pool.

Mahali Mzuri is a beautiful property of Virgin Limited Edition and was recently named the best hotel in the world.  According to Sir Richard Branson, the owner and Founder of Virgin Group, Mahali Mzuri, is a very special place, run by a brilliant team of people.

Mahali Mzuri is Sir Richard Branson’s 12-tented luxury safari camp in the Kenyan Bush. At Mahali Mzuri, you have a front row seat, not just to the great wildebeest migration, but also to the abundant game you are able to spot all year round.

The owner, Sir Richard Branson, describes Mahali Mzuri, as a ‘beautiful place’, and a very upmarket property for the Mara, which opened in 2013. It is part of the Virgin Limited Edition range that he personally built inside the 133km² Olare Motorogi Conservancy.

An article by Stacey Leasca in Travel and Leisure of September 08, 2021 posits that Mahali Mzuri is a place where you can get a world-class dinner and maybe run into a zebra on the way to the bathroom and earned its founder a Maasai Elder award in 2007, with the citation of “bringing prosperity to the land” by Travel and Leisure’s World’s Best Awards 2021.

The same article postulates that Sir Richard Branson was made aware of a severe environmental threat to the Maasai Mara ecosystem, by a friend Jake Grieves Cook, former Chairman of the Kenya Tourism Federation and Kenya Tourism Board. According to the article, Jake proposed that Sir Richard and a number of others invest in the Maasai Mara area with a view to expanding the protected area for the benefit of both the local community and wildlife alike. From there, Mahali Mzuri was born.

Mahali Mzuri includes 12 luxury tents within the Maasai Mara ecosystem. Each tent-en-suite consists of a private bath, leather lounge furniture and other expensive and luxurious amenities and structures including soaking bath tubs, wide windows and doors that extend sprawled into a large veranda, to enable the occupants to enjoy the scenic outdoors, which include the wildlife, according to Stacey Leasca.

She adds, ‘Mahali Mzuri is exclusive and can cater to a maximum of 24 guests at one time, guaranteeing the visitors peace and tranquillity during their stay and ensuring excellence in customer experience throughout their stay. Included in the offerings at Mahali Mzuri is a pan-African cuisine locally sourced meat, fruits and vegetables, outside picnics, remote barbeques, the “sundowner” safari experience and the amazing game drives, as the conservancy is home to a number of lions, zebra, gazelles and hundreds of thousands of Loita wildebeest’.

Lyndsey Marris, a respected Kenya Expert in these matters, ‘In the building of permanent structures, such as a swimming pool and extraordinary main areas and rooms, it has indeed gone much further than almost any other camp in the region… the camp’s ethical approach is unusual architecturally, but very stylish’.

She adds and we quote verbatim: ‘It is to the owners’ credit that they have built Mahali Mzuri in one of the more remote parts of the Mara, in an area that had struggled with cattle overgrazing. This area has now been combined with Olare Orok to form the larger Olare Motorogi Conservancy and – over the five years since Mahali Mzuri has been in development – has now turned a corner. Guests still have to travel a short way to get to areas with good predators, but the immediate area around the camp is improving rapidly: a real success for conservation’

Mahali Mzuri’s main areas are set on a big wooden deck overlooking a deep valley. Between the dining and the lounge tents is an outside deck, with a long sofa-bench looking across the firepit. The views from here are stunning. Tables and chairs are set here for alfresco dining: simple and modern in style, resulting in a clean, minimalist look. Steel-cable railings protect guests at the edge of the decking.

To one side is the modestly sized lounge and bar, under canvas, but very funky and unlike anything we have seen in Kenya. High leather bar stools complement the wooden bar, and there is usually a member of staff to offer you a cocktail or artisan coffee, adds Lyndsey in her background literature.

Perhaps a little more in keeping with the surroundings are the simpler leather sofas, cowhide rugs and velvet armchairs that furnish the rest of the lounge area. There is a spotting telescope in the corner, and binoculars for people who want to watch game from camp. Tucked away in a hidden cabinet there is also a satellite TV and a selection of DVDs. Wi-Fi is available in this area without restriction.

In a separate tent on the other side of the outside deck, the dining area is fitted out with modern furniture and a long glass table that feel a world away from the African bush—until you notice the beaded placemats, wooden light fittings and African fabrics hanging from the walls.

Steps from the main deck lead down to the long, narrow swimming pool, which is perfect for swimming lengths. There are chairs and loungers at each end, while close by is Mahali Mzuri’s spa, totally open to the view at the front and stocked with locally made products. A variety of massages and treatments are on offer here, at extra cost.

The 12 tented suites at Mahali Mzuri are in themselves highly unusual. Designed to look like Maasai shields, each has a gigantic steel frame embedded in huge blocks of concrete on a heavily landscaped slope strewn with quarried rock. This frame supports a vast synthetic-canvas roof, suspended from a seven-metre pole topped by a lightning rod, and designed to make the most of the natural breeze. The canvas tents beneath are smaller than you might expect, raised on wooden platforms and with something of the feel of a hotel room. In the bedroom you’ll find carpeted floors, a large comfortable bed and a leather sofa, and each tent is equipped with a fridge, tea and coffee station, white bathrobes and a dark wooden writing desk with information booklets.

The en-suite bathrooms are stylish, with lots of dark wood and contemporary fittings, including twin ceramic washbasins, walk-in showers and claw-foot baths. The towels are delightfully soft and locally made toiletries are provided. Two of these tents are slightly larger than the others, and designed for families, with a separate lounge area that can accommodate two children on pull-out sofas.

The activities at Mahali Mzuri include morning and afternoon game drives, or full-day drives on the Olare Motorogi Conservancy. It is also possible to organize game drives into the main Masaai Mara Reserve. Uncommercial village visits, timed to meet or send off the cattle, are also available. Activities are led by the experienced guide team, which has a number of silver certified guides amongst its ranks.

The flight from Nairobi into the Maasai Mara’s Mara North airstrip takes about 70 minutes. From here, it’s a 45-minute transfer or longer if your turn it into a game drive back to camp.

If you’re familiar with Richard Branson’s Virgin Limited Edition resorts, the features at his ultra-modern Mahali Mzuri will come as no surprise. The huge glass table in the dining area, the smart swimming pool and the spa tent are only a few of Mahali Mzuri’s luxurious facilities.

Wi-Fi is available throughout Mahali Mzuri and they also have iPads that guests can borrow. The internet is so fast here that live streaming and Skype is not a problem. There is good cell phone reception too. There is a satellite TV in the central lounge.

There is a helipad by the lodge and a private airstrip 10 minutes away for use in an emergency.

PrevPreviousYes, you can still get Covid after being vaccinated, but you’re unlikely to get as sick
NextPublisher’s Note: The criteria in decision making of The Top 25 Resorts, Tours and Travels Brands Transforming The Customer Experience In Kenya 2022Next