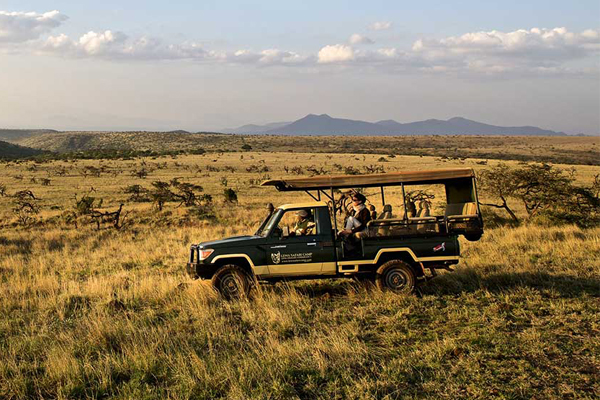 Registered as a rhino conservancy in 1983, the conservancy is famous for its successful rhino and Grevy zebra breeding.

Lewa Wildlife Conservancy covers 65,000 acres of pristine African wilderness. With dramatic views of snow-capped Mt Kenya to the south, and the arid lands of Tassia and Il Ngwesi to the north, Lewa showcases a range of wild habitats from highland forests, wide open grasslands, melt-water mountain springs and acacia woodland and supports over 440 bird species. More than 70 different animal species roam the vast grasslands at the foot of Mt Kenya.

Lewa has dramatic views to the south of snow-capped Mt. Kenya, and to the north down to the arid lands of Tassia and Il Ngwesi. It has many diverse habitats from pristine forest, fertile grasslands, extensive springs and acacia woodland, according to its official website that is the main source of this article.

Registered as a rhino conservancy in 1983, the conservancy is famous for its successful rhino and Grevy zebra breeding, two endangered species. Lewa is home to 10 per cent of Kenya’s rhino, and 20 per cent of the world’s population of Grevy zebra. The whole conservancy is fenced and employs over 150 rangers. The conservancy does extensive outreach work into the surrounding communities with its Community Development Program (CDP), including healthcare, education, micro-finance, and water projects – in order to share with the community, the benefits of wildlife as well as being a responsible corporate citizen.

With over 70 recorded mammal species within the conservancy, for guests, the wildlife experience is unrivalled.

Lewa Wildlife Conservancy was previously a cattle ranch owned by David and Delia Craig, who together with Ana Mertz and Peter Jenkins, initially set aside 5,000 acres to protect and breed rhinos, whose population had dropped precipitously from 20,000 to less than 300 in the 1970′s.

One of the most intriguing animals on the planet is the black rhinoceros. This distinctive mammal can reach weights of 1400 kg and prefers a solitary existence. The black rhinoceros is in jeopardy of extinction and would certainly have fared much better had hunters and poachers not pursued them for many years.

Lewa has one of the highest wildlife densities in Kenya including 12 per cent of the country’s black and white rhinos, and the world’s single largest population of Grevy’s zebra.

The Lewa Wildlife Conservancy works as a catalyst for the conservation of wildlife and its habitat. It does this through the protection and management of species, the initiation and support of community conservation and development programs, and the education of neighbouring areas in the value of wildlife.

The Conservancy is also home to the Northern Rangelands Trust, an innovative partnership with a number of communities to the north who have given land for the preservation of wildlife. Lewa has its own education program that helps develop schools and students. Lewa Wildlife Conservancy is located in Meru County, south of Isiolo town but north of Mount Kenya.

Lewa was once a cattle ranch; it then became a guarded black rhino sanctuary, and it is now the headquarters for a non-profit wildlife Conservancy, which has gained a world-wide reputation for extending the benefits of conservation beyond its borders.

The Craig and Douglas family first came to Lewa Downs in 1922 and managed it as a cattle ranch for over 50 years. Unlike many other ranchers in the area, they had always valued the wildlife that shared the land with the cattle and developed wildlife tourism as an additional activity.

By the early 1980s, it was uncertain whether any black rhinos would survive in Kenya. Poaching for horn had reduced Kenya’s rhinos from some 20,000 in the mid-1970s to a few hundred by 1986. It was clear that the only way to prevent their complete extinction was to create high security sanctuaries.

In 1983, the Craigs and Anna Merz–who funded the program–decided to establish the fenced and guarded Ngare Sergoi Rhino Sanctuary at the western end of Lewa Downs. The rhino sanctuary was stocked partly with animals from other reserves and partly by isolated individuals from northern Kenya, whose likely survival was a matter of months at most. The black rhino that was caught settled down and bred, and white rhino were added.

The perimeter was almost entirely fenced, for security and to ensure that elephants did not raid crops in neighbouring farms, but the ecological connections between Lewa and neighbouring wildlife areas were maintained by leaving gaps in the fence for animal movements. At the same time the entire property was converted to a wildlife sanctuary, as the Craig family handed over the management of the ranch to a non-profit organisation–the Lewa Wildlife Conservancy.

On 19 October 2010, Prince William of Wales proposed marriage to Catherine Middleton at Lewa. That year, 13 per cent of Kenya’s rhinos lived in the Lewa Wildlife Conservancy—66 white rhinos and 72 black rhinos.

At Elewana Collection, each of our 16 camps, lodges, and beach hideaways has its own individual style and charm, offering a completely unique and immersive experience in each destination. In keeping in line with commitment of providing the highest level of luxury and comfort for guests, periodic updates and renovations are done. Whether it’s a fresh coat of paint, soft remodelling or a major refurb, these are continually done to enhance guest experience are enhanced.

The philosophy focuses on the concept of “harmony” (the root meaning of Elewana in Swahili) which drives the commitment to deliver unforgettable safari experiences. The brand believes in designing sustainably without unnecessary waste and aim to leave as little impact as possible on the surrounding environment, repurposing materials wherever possible.

The teams have been working hard over the past few months on important renovations at the camps and lodges in Kenya and Tanzania in order to welcome back visitors with fresh new aspects, renovations and upgrades, among them: Capturing the original essence of the mobile African safari, Elewana Serengeti Pioneer Camp, remains the engendering nostalgic wonderment that unlocks the adventurous spirit within all of the product whilst offering the comfort that allows you to truly connect with the serene surroundings of Serengeti National Park. Visitors to Serengeti Pioneer Camp now have the opportunity to enjoy unparalleled panoramic views across the plains from an immaculately refurbished pool area. Additionally, all wooden decking has been replaced across the camp and the canvas in the public areas has been cleaned and repainted. All wooden stairs and flooring have been varnished and the Makuti has been replaced, resulting in an elegant feel across this luxury quintessentially classic safari camp.

Offering the ultimate elevated experience, Elewana Tarangire Treetops, is a true reflection of living an enchanting dream high up in the trees. Centred around a thousand-year-old baobab tree, the public area has been rebuilt with new steel substructures and mninga wood to blend seamlessly into the natural feel of this stunning space, along with a repainting throughout and a re-sanding and re-treatment of all floors. Located in the surrounding treetops, the guest rooms famed for their magnificent views across the Tarangire plains, have been refurbished both internally and externally including the replacement of steel substructures and the entire entrance stairways and decking to improve access.

An Idyll of warmth, Elewana Arusha Coffee Lodge, the perfect beginning and end to any African safari, is now offering a smart new welcome area, enhanced accommodation and improved dining experience following substantial investment. In the reception, roofing sheets have been replaced and new paving has been laid using vividly coloured tanga stone that reflect the hospitable local feel of the lodge. The outdoor pizza oven deck has been rebuilt, resulting in a more relaxing atmosphere and the bistro area also has had a refresh. Additionally, all communal areas were repainted to enhance the cozy and warm feel that permeates throughout this haven for relaxation.

Set against the shadow of Mount Kilimanjaro, away from the rest, with the best mountain views and full access to both Amboseli and an exclusive private conservancy, Gold Eco-rated, 100 per cent solar powered Elewana Tortilis Camp has undergone significant refurbishments to the spacious makuti-covered guest tents. Consistent with the natural colour palette of the camp, soft furnishings and natural textures add a fresh new feel and the large polished stone floor verandahs allow you to enjoy the majestic views in comfort and privacy. Other noteworthy improvements include; a shamba renovation, new guide tent and road and parking enhancements, as well as a new electric fence.

High-design but low-impact, the beautifully styled Elewana Elsa’s Kopje is built round a granite hill, with each cottage carefully crafted within the rocks, natural curves and trees offering the most undisrupted views of authentic African landscape. Natural textures abound, the lofty thatched ceilings have been reconstructed in the main area, allowing light to flood in, maximising views and adding a fresh and contemporary feel. Elsa’s main lounge is a place to meet, relax, socialise and take in the breath-taking view. A lovely new cabro driveway has also been laid with the help of the entire team who worked tirelessly to get this completed and ready in time to welcome our guests back.