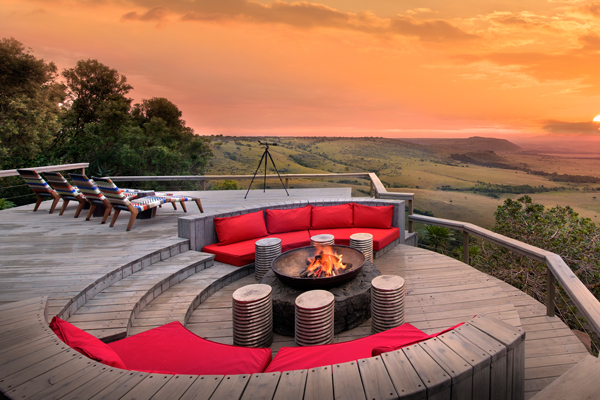 Angama Mara takes its name from the Swahili angama, meaning 'suspended in the air', and it is truly in a superlative position.

A LOVELY SAFARI LODGE LOCATED BETWEEN HEAVEN AND EARTH

Rated by Travellers choice number 2 out of the 12 very good resorts in the Maasai Mara National Reserve and opened only in 2015 is Angama Mara, inspired by the Swahili word for ‘suspended in mid-air’. Located high above the floor of Africa’s Great Rift Valley, Angama Mara is a remarkable owner-run safari lodge overlooking the western part of Kenya’s Maasai Mara, considered by many as the loveliest game reserve on the African sub-continent. At Angama Mara, guests find a lodge where everything is as it ought to be: two intimate camps of just fifteen tented suites each, a private airfield and access to the Mara below, tailor-made safari days and the renowned warm welcome of the Kenyan people.

The lodge is perfectly complemented by Angama Safari Camp, an exclusive-use mobile tented camp sited deep in the Mara Triangle, and amidst the mega herds during the Great Migration.

It is set in a commanding position on the rim of the Siria-Oloololo Escarpment, looking down onto the Mara Triangle. The lodge comprises two identical, self-contained camps, each with 15 tented suites, its own central area, and independent services.

Angama Mara takes its name from the Swahili angama, meaning ‘suspended in the air’, and it is truly in a superlative position. The site was formerly occupied by Olkurruk Mara Lodge, which was built for the crew and stars of Sydney Pollack’s 1985 blockbuster movie, Out of Africa. The original lodge sadly burned down, but it has allowed the brand new Angama Mara to make use of the outstanding location.

Angama Mara was built by Steve and Nicky Fitzgerald, who continue to own and help run the lodge. Over the past 30 years, they have created and worked at some of the best safari lodges in sub-Saharan Africa, and this new venture has clearly been influenced by some of their other projects – including Tanzania’s Ngorongoro Crater Lodge, which was built in 1995.

The 30 tented suites at Angama Mara, each covering an area of more than 100m2, are split evenly between the ‘South Camp’, which faces south-east, and the ‘North Camp’, which looks directly east over the Maasai Mara.

Although three walls and the roof of the suites are canvas, they feel more like modern, open-plan apartments than safari tents. All are glass-fronted, with superb views over the Mara from every part of the room—the bed, the bath, the sitting area or the shower. However, although you can choose to sleep with the sliding doors open, admitting fresh air and some sounds of the wild, some guests might feel quite removed from the surrounding wildlife. Each suite does, though, have a large, decked veranda with two modern red rocking chairs—a great place to while away the afternoon or indulge in a private dinner.

Inside, each suite is art deco in style: with polished dark wooden parquet flooring; high, well-lit, pink ceilings; and walls made from a combination of white quilted screens and exposed brick. Tasteful flashes of red, gold and bronze add to the sophisticated appearance.

All of the tented suites contain double or twin beds and four of them are interconnecting, with a shared balcony, making them suitable for families. The beds have electric blankets, which are surprisingly welcome at night, when it can be pretty chilly this high on the escarpment.

Since the suites are open plan, the bathroom is separated from the lounge only by a decorative screen. There is a free-standing bath, a vanity mirror with double basins and gold taps, a separate flush toilet and an excellent rain shower. A selection of Afro-chic toiletries is also supplied.

Each camp has its own main area, housed within one large building with a terrace, and this, together with the division of the suites, combines to make the lodge as a whole feel smaller than it really is.

The restaurant and bar area looks very professional, not dissimilar to a top-end restaurant in a major city. Polished red floors, rustic wood-beamed ceilings, exposed brick walls and yet more flashes of bronze and red continue the contemporary theme.

To one side is a cosy library, where a log fire is lit on colder nights and guests may choose to have a private dinner at the large dining table. There is also a TV here; with a selection of DVDs should you want to watch a film in the evening.

However, by far the most striking feature of Angama Mara is the splendid terrace and ‘baraza’ (meaning ‘meeting place’), which overhangs the Siria-Oloololo Escarpment and gives arguably the best views of the Mara to be found. Breakfast, lunch and often dinner are served on this terrace, and the sunken firepit with comfortable red cushions is an excellent place to meet for a drink before dinner. There is also a telescope here so that guests can look for wildlife in the Mara Triangle.

The activities at Angama Mara are varied and flexible. Most guests will want to make use of the lodge’s open vehicles and go on game drives in the Mara Triangle section of the Maasai Mara National Reserve. This large district is visited by very few other lodges and camps, but gives excellent wildlife-viewing from a network of well-maintained earth roads. Parts of the Mara Triangle are also open to off-road driving. As well as game drives, you can do guided walks on the escarpment.

If you just want to chill, you’ll find a decent-sized infinity pool 12m x 6m with suntrap walling around three sides, as well as a fitness suite, and the option of massages on your own veranda at extra cost.

A visit to the local village, costing US$20 per person, can be a rewarding—and very immersive— experience. Guests will meet the village chief, who will give a talk, and you will be welcomed with a dance – but be prepared to be sold some souvenirs at the end!

Angama Mara has also built a huge vegetable garden, which provides seasonal, fresh produce to the lodge. Tours of this impressive shamba (meaning ‘farm’ in Swahili) are also very popular.

The team behind Angama Mara is doing a great amount for the local communities too. Each guest makes a US$10 per night donation, which is invested in community and conservation projects in the Mara Triangle. So far, they have built a village for the staff that includes a clinic and dispensary, and classrooms at a nearby school, including staff houses for teachers to enable then stay on site.

Guides from the lodge are also educating children about the benefits of conservation as well as working very closely with the Mara Conservancy, which manages the Mara Triangle, assisting them with anti-poaching. This is particularly important in this unfenced area, which has such a high population of elephant and rhino.

The view by the writers of this article is that Angama Mara is undoubtedly one of the most luxurious lodges in the Maasai Mara. A stay here is very comfortable and it particularly suits honeymooners and those with a strong romantic streak.

The nearest airstrip is Kichwa Tembo, which is about a 45-minute flight from Nairobi and then a half hour drive to Angama Mara.

The quality of the food will blow you away. Seasonal, fresh produce is a signature of Angama, and most of it is grown a few hundred metres from the restaurant in their very own shamba. All meals are served à la carte at private tables.

For breakfast you are likely to have a fruit smoothie, followed by homemade muesli and yoghurt, which is rounded off by creamy scrambled eggs, pan-fried halloumi and roasted tomatoes. Lunch is likely to consist of a Greek salad, then home-baked chick peas with lemon yoghurt and pitta wedges.

The three-course dinner is perhaps the best meal of the day. You can have an amazing prawn starter, followed by a juicy barbecued steak and a chocolate pot for dessert.

Angama Mara has a private entrance to the 512 square kilometres (198 sq. mi) Mara Triangle where all game drives take place. The Mara Triangle has abundant year-round wildlife, including the Big Five. It is also where the Great Migration enters and exits the Maasai Mara National Reserve and crosses the Mara River.

Guests contribute a small nightly donation to the Angama Foundation which has been set up as a separate non-profit entity. These funds are used for various initiatives in the fields of education, healthcare and conservation.

The Angama Foundation works closely with neighbouring schools and several conservation organisations including the Mara Conservancy, the Mara Elephant Project and the Anne K. Taylor Fund. It has also built a clinic on the property of Angama Mara for guests, staff and the neighbouring communities.

The Angama Foundation was the creator of The Greatest Maasai Mara Photographer of the Year competition.

In 2018, Angama Mara was listed in Condé Nast Traveler as the number 1 resort in Africa. It has also received other accolades including being featured in the Travel + Leisure World’s Best Awards in 2020 and Fodor’s Finest Hotels in 2020.

In a nutshell, the luxurious Angama Mara is perched high on the rim of Africa’s Great Rift Valley with a sensational vantage point overlooking the Mara Triangle. It is inspired by the Swahili word for ‘suspended in mid-air’, and seems to float way up above the Maasai Mara where, every morning, hot air balloons sail past the 10-metre-wide floor-to-ceiling glass fronts of each tented suite.

The lodge is inspired by an old-world “Country Club” style, and guests dine, read, relax, and enjoy a drink in a place where indoors and outdoors merge into one. The architecture is filled with drama, and the red brickwork is inspired by local Maasai technique.

In contrast, the tented suites are reminiscent of a classical tented African safari. Every guest comfort has been considered: end-to-end glass fronts, sweeping canvas, polished parquet floors, stylish furnishings and private decks overhanging the Mara below.

At the Pavilion, set between the two camps, guests will find a fitness centre, a 12,5m (40ft) swimming pool, a curated gallery of African craft and art, clothing and jewellery, and a sun-filled studio where Maasai women work at beading bespoke items.