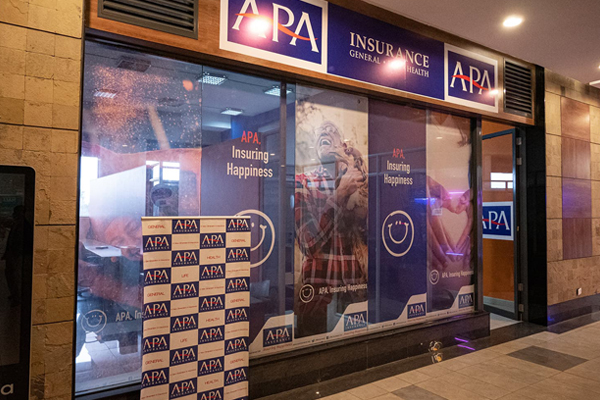 APA Apollo Group has grown to be one of the largest insurance companies in Kenya, providing a wide range of financial products and services including General, Life and Health Insurance and Wealth Creation.

It’s hard to tell the story of APA without mentioning Apollo Group’s CEO Ashok Shah. The history of the two brands, APA and Ashok Shah, are intertwined.

It is an inspiring story of how APA has been shaking up and disrupting the insurance industry through business innovation, and customer-guided insurance products, led by Ashok, as he is affectionately known. It’s a story scripted by genuine customer needs, industry gaps, a creative workforce and most of all, APA’s desire to provide value.

APA Apollo Group has been around for over 75 years and Ashok has been part of it for 44. He believes that what has kept the company thriving is its focus on its customers.   The customers’ needs have been the driving force behind the company’s innovations and adaptations. Customer focus goes beyond waiting for customer feedback, it entails listening, wearing their shoes and changing the rules to accommodate changing needs. This is what determine the direction APA business model takes, enabling the firm to adapt as it evolves over the years to preserve its brand equity in the highly competitive insurance industry.

Offering customer value is an infinite goal, there’s no end to it. It is ambition that has underpinned APA Insurance’s growth into one of Kenya’s leading insurance groups and a premier insurance brand.

In 1996, when Ashok Shah became CEO of Apollo Insurance, he was excited about the opportunity to create the best team in the industry, and to constantly motivate and empower the team to own the brand. His dream was to build an insurance company that would do much more than the industry norm for its clients. That dream formed the bedrock under which the merger of the general insurance business of Apollo Insurance and Pan Africa Insurance was born in 2003. The APA Insurance brand is the testament of the merger.

APA Insurance has remained committed to its core principles – an intense focus on customers, and the desire to offer real value. This has led to the company’s efficiency, growth and profitability, making it more efficient and investing in its people. With continuous refinement and improvements, APA Apollo as a top insurance brand, has firmly remained on that critical path.

A pioneer of many firsts

APA Apollo Group has grown to be one of the largest insurance companies in Kenya, providing a wide range of financial products and services including General, Life and Health Insurance and Wealth Creation.  Every step taken to improve APA Apollo Group to date has been deliberately designed and geared to enable it to serve their stakeholders better and to grow closer to them, as a caring insurance community, contributing, in their own way to mental wellness; ‘Insuring Happiness.’ to ensure peace of mind.

As a result of its ambition to continuously enrich the lives of its people, APA has been a pioneer, as an insurer, with many firsts. APA was the first insurer to give medical insurance for people with HIV in 2000 and continued to be the only Insurer providing the service in the following subsequent years.

In 2007, Kenya was at the precipice, hit by political violence following the disputed general elections. Lives were lost and properties worth millions of shillings looted or destroyed, mostly motor vehicles and buildings.  No insurance company was providing cover for losses incurred as a result of political violence. It was, in fact, only featured as exclusions in the clauses of all insurance policy documents.

Sympathetic to its clients left with looted premises and damaged motor vehicles, and in keeping with its ambition to adapt to its customers’ needs, APA decided to fill the existing gap and compensate all genuine claims filed by its clients.  This was done out of its own reserve funds as reinsurance could not support claims that were exclusions in the contractual documents known in insurance parlance as the insurance policies.

In 2010, the APA brand was redefined by its imperative brand promise; to ‘Rewrite the Rules of Insurance’.  It distinguished the APA brand from other brands by becoming the only insurance company to insure older cars, create a cover for clients up to the age of 80 and introduced political violence cover.  In addition, APA introduced crop and livestock insurance which is now an awarding winning product and imitated by many insurance underwriters globally.

APA remains vigilant to any opportunities that emerge requiring innovation, creativity and bridging gaps to create value to the industry and the national economic ecosystem. APA remains committed to creating infinite value for all its shareholders including the employees, partners, the community where it does business and the conservation of the environment. This is the kind of leadership that has earned Ashok Shah, the first recipient of a Lifetime Achievement Award for his contribution to the Insurance Industry.

To illustrate APA as a premier insurance brand that keeps its promise, APA was the first insurance company to settle a colossal claim payment of Ksh 1.97 billion (USD 26m); the largest and most expedient compensation to the Kenya Airports Authority after the fire tragedy that gutted a big part of the Jomo Kenyatta International Airport in August of 2013.

In 2020, when Covid-19 hit the whole world, infecting millions of people, APA Insurance, agreed to compensate its clients despite the fact that a pandemic was an exclusion in all insurance Policies; another demonstration of where the company’s values lie.  APA paid for all Covid-19 medical claims for its clients to the full extent of their medical insurance covers while other insurers either decline altogether or limit the amount claimable to the bare minimum.

Once again, APA Insurance has proved that it insures happiness.

What other insurance firm can beat this kind of customer care?

APA has always been the straight-talking voice of the insurance industry in Kenya and is well respected and recognized as an expert on insurance and related financial matters. For instance, this issue carries a well-reasoned opinion of the NHIF (Amendment) Bill currently in process, written by Ashok Shah.

The House of Talent

The APA Apollo Group has accumulated an incredible diversity of skills in its workforce and these have been recognised by numerous awards.  Vinod Bharatan, APA Insurance, won the CEO of the Year award at the Insurance Awards in 2018 followed by Catherine Karimi, the first female CEO of APA Life Insurance, in 2020 and the first female in the industry to win the award. Catherine Karimi, was judged number 2 in the inaugural Angaza Awards and in the Business Monthly Top 25 Most Powerful Women in the C-Suite Impacting the Business Landscape in Kenya, 2021.

When Ashok Shah is asked, which is often, “What keeps APA Insurance so successful?”, the answer is accompanied with a warm smile, followed by the words, ‘the secret lies in the winning spirit of our people; we have an extraordinary collection of expertise. APA has recruited, motivated, empowered and retained an incredible number of human resources, boasting diversity of skills and experience in its workforce. APA has also built trusting relationships with thousands of clients, due to word of mouth from satisfied clients from prompt and full payments of claims. Between the expertise and the trusting relationships, lies the opportunity to help its clients deal with life’s uncertainties.  Our vision is to be our clients’ most valuable insurer. We cannot achieve this without our employees, who are our most treasured resource for sustained competitive advantage. We have empowered and trusted our people to listen, to our customers, to see them, to pre-empt their needs and innovate to bridge the gaps between our customers and their comfort.  They have never let us down’.

One of APA Apollo’s greatest achievements as a company, and a great personal accomplishment for Ashok Shah, was receiving the 10th European Microfinance Award of 2019 in recognition of the firm’s response in “Strengthening Resilience to Climate Change”.  APA was the first ever insurance company to receive this award.

APA Insurance also offers index-based Agriculture Insurance which covers yields and livestock, providing farmers with a safety net.  Index-based insurance is an innovative approach to insurance whereby payments are linked to easily measured environmental conditions known as an “index” (for example, the level of rainfall, yields or vegetation levels as measured by satellite) directly connected to the loss of agricultural farm output.

APA supports environmental conservation in many ways.  APA has been recognized for their numerous contributions to the society. For instance, construction of sand dams across the country by APA has benefitted 10,000 initially needy families. These families, now with beaming faces, have clean water throughout the year from the sand dams that stream water to their doorsteps, putting an end to the drudgery of a daily 5 to 6 hour’s walks to fetch water.

APA continuously plant trees all over the country, expanding the green cover across the Kenya landscape, and contributing to the beauty and future of the nation.

In 2018, APA developed a new brand campaign titled ‘Insuring Happiness.’  The concept of ‘Insuring Happiness’ was about living life without being bogged down by the uncertainties of life.  It’s about securing the health and financial future of the people that matter to us, and protecting property and businesses that have taken a lifetime to build. The aim is to carry its customers risks so that the customers live happy lives un-inhibited by fear of loss of life, earnings or business income.

Today, APA is leveraging enhanced digital technology with Happiness App to provide convenient access to services for their customers and drive the firm’s processes and it implement socially responsible business practices that allow it to give back to the community and minimize human impact on the environment.

Other efforts in caring for the community and ensuring happiness, is a program for the Youth. Towards this, APA helps the youth become more self-reliant by providing full secondary education scholarships to children from slums and in some instances, to the exceptional but needy students, full scholarships for university studies as well.  A number of the children who benefit from the scholarships get an opportunity for internships and gainful employment at APA and their agencies for their first job after completing education. That is the Brand that is ‘rescripting insurance’, APA.