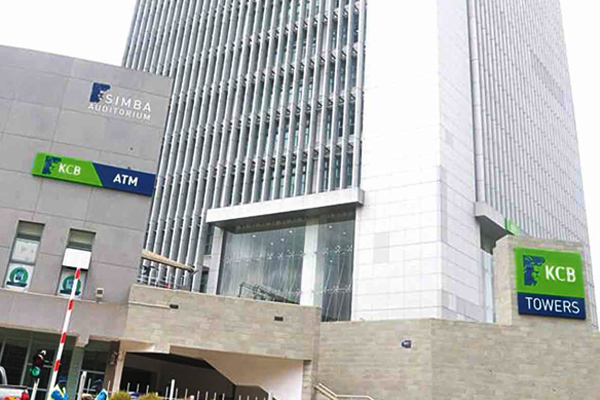 KCB’s penchant for excellence extends well beyond its core business of lending. The bank has also blazed a trail in sponsorship marketing.

GOING AHEAD, THE SPIRIT IN EVERY KENYAN

KCB Bank Group Plc holds the unique distinction of being the longest running financial services group in the region with a rich heritage that goes back to 1896. Over the past century, the apex lender has redefined banking by championing innovation and financial inclusion across East Africa. As at the end of 2020, the Group had Ksh1 trillion in assets, a loan book of Ksh595 billion, 25.2 million customers and a work force of approximately 7,500 employees, with 45 per cent of them being women. The complexity that comes with operations of its scale has not undermined its ability to quickly capitalize on emerging opportunities in the digital space, particularly in mobile lending. Mobile loans advanced by the bank increased from Ksh29.6 billion in 2017 to Ksh154 billion in 2020, an increase of more than five times in a space of just three years.

KCB’s penchant for excellence extends well beyond its core business of lending. The bank has also blazed a trail in sponsorship marketing. Its committed sponsorship of motor sports in Kenya over the past two decades stands out as a glowing case study of how strategic choices in sponsorship marketing and a long-term focus can unlock tremendous value not just for a brand, but for an entire country.

When Kenya’s iconic Safari Rally was struck off the Fédération Internationale de l’Automobile’s (FIA) World Rally Championship (WRC) in 2002, many corporate sponsors did the predictable thing and moved their sponsorship budgets elsewhere. However, KCB saw an opportunity amidst the fallout. Kenya had been in the world championship since the series’ inauguration in 1973. The country’s relegation from WRC to FIA African Rally Championship (ARC) status in 2002 lowered the level of visibility of the sport but didn’t erode the huge global fan base the country had studiously built for five decades. KCB had a keen understanding of the immense potential this loyal fan base could unlock for the sport and its brand and when everyone was rushing to get their funds out of motor sport, the lender made its debut by sponsoring the 2003 and 2004 Safaris in South Coast.

KCB quickly doubled down on its commitment to motor sports in Kenya by coming on board as title sponsor of the 9 legs of the Kenya National Rally Championship series in 2005. The following year, the Bank committed a three-year sponsorship package to race ahead with the rally-sport through to 2008. In that same year, KCB launched the East African Rally Challenge. Motor sports in Kenya has been synonymous with KCB ever since.

KCB’s unwavering support for motor sports through the years has been instrumental in getting Kenya back to the WRC Calendar, a feat that was achieved this year to much fanfare by Kenyans from all walks of life. The WRC returned to Kenya in June after a 19-year hiatus, giving Kenyans a nostalgic experience in the country’s first major international sports competition since the beginning of the Covid-19 pandemic.

Safari Rally CEO and Kenya Motor Sports Federation Chairman Phineas Kimathi has continued to extol KCB for its continued support which made Kenya’s national series (KNRC) the best in Africa and led to its successful WRC candidature.

“If the Bank didn’t step up when we lost WRC status, it would have meant that there was no Safari to revive or generally sell to WRC or FIA. In essence, KCB made sure motorsports was at its best in Kenya over the past 19 years. For Kenya to get back to WRC, it was not by fluke or favoritism. Kenya has been running the best ARC in the continent of Africa. Our drivers have been champions in the continent for the last five years and it’s on merit that Kenya will be back in the summit of sport in the world until 2026,” said Kimathi, underlining the integral role KCB’s steadfast support of the sport over the years has played in getting Kenya back on the global stage.

The year 2021 is also best remembered as one where KCB Bank has put out innovative products and structures to cushion individual customers and businesses, especially the Micro, Small and Medium Enterprises (MSMEs) on the journey towards recovery from the adverse effects on the economic and social environment occasioned by the adverse effects of the Covid-19 Pandemic.

KCB Bank entered 2021 in a roll, with the Joshua Oigara led Bank bagging a major finance deal for sustainable projects from the UN backed Green Climate Fund (GCR). In essence, THE YEAR 2021 started with the celebration. The UN supported GCR is a global fund created to support efforts of emerging economies and frontier markets to respond to the challenges of climate change and to help limit or reduce their greenhouse gas emissions, according to a press release announcing the deal.

According to GCR, the endorsement cements KCB Bank’s efforts in enhancing sustainability as the bank now has an opportunity to make even a bigger impact through lending to mega green projects throughout East Africa, where KCB Bank boasts of both large and deep footprints.

The accolade and subsequent accreditation follow extensive due diligence assessment conducted by GCF since 2018, in order to ascertain KCB Bank’s capability, capacity and preparedness in managing climate change programs and more so, big ticket projects.

KCB Bank is proud of the efforts and investment made over the years to mainstream and entrench a sustainable business that has earned the bank this recognition. The accreditation underpins Kenya’s position as a leader in green finance, the statement added.

The fund will also enable KCB Bank to sustainably support the country’s aspirations, such as the Big Four Agenda focus areas of manufacturing to support value creation and employment, food security, universal health care and affordable and quality low-cost housing, all under the umbrella of the country’s development strategy, Vision 2030.

Since ascending to the top C-Suite office as MD and CEO in January 2013, Joshua Oigara has provided clear and strategic leadership that started in 2013 when the KCB Group launched its sustainability framework dubbed KCB Group Sustainability Roadmap 2013-2020. This Strategy was anchored on four key pillars: financial, economic, social and environmental sustainability. The four pillars outlined ways in which KCB Group’s corporate strategy could help grow revenue, reduce costs, manage risks and build on its bank brand and reputation.

These included milestones such as the launch of KCB-MPesa and holding of the first suppliers’ conference in 2015, in the back drop of establishing the KCB foundation and rolling out of the KCB M-Benki in 2014 respectively.

Picking from where Dr. Martin Oduor Otieno had left KCB Bank, Joshua Oigara boasts of numerous iconic achievements under his belt, that continue to build the KCB Brand equity and enhancing the brand essence. Among these great achievements under his watch is the acquisition of the National Bank of Kenya towards the end of 2019 and the partnership with Safaricom to offer loans through the mobile phone that is KCB MPesa, at the time regarded as a game changer in the financial services sector and an innovation that was quickly replicated globally by every bank and mobile phone company.

KCB Bank is the largest in EA by assets, boasting the largest branch network in the region with over 250 branches, 962 ATMs and 10,102 Banking agents. KCB has also been a catalyst in championing motor sports in East Africa, culminating in Rally Kenya’s return to the coveted WRC status after a 19-years spell.

The current CEO, growing in leaps and bounds the brand equity of KCB Bank is a past winner of the Africa investor (Ai) CEO of the year awards for 2017. The award recognizes and rewards CEOs that have shown commitment and sustainable development in the organizations they lead.

In public service, Oigara has chaired the Energy Regulatory Authority and currently sits on the prestigious Vision 2030 Delivery Board. He is also a multiple past chairman of the Kenya Bankers Association.

In 2021, Joshua has been keenly watching and playing a strategic role in the organization and title sponsorship for the Safari Rally Kenya, the successor of the Safari Rally, during its maiden return to the World Rally Championship (WRC) motorsports calendar. This is a singular achievement that earns KCB Brand a top place in the hall of fame as one of the top Kenya Brands.