South Africa’s constitutional democracy debate: echoes of an inglorious past 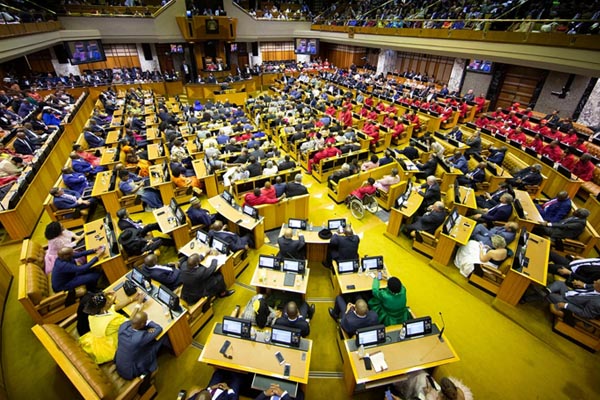 A constitution is only as good as the measure of effective protection it gives to those who differ, even radically, from the policies of the government.

Some prominent politicians from South Africa’s governing African National Congress (ANC) recently questioned the role of the courts in the constitution. In January, tourism minister Lindiwe Sisulu insulted the judges as “colonised” for enforcing the constitution, which she blamed for continued black deprivation 28 years into democracy.

Later, Sihle Zikalala, the premier of KwaZulu-Natal province, called for a return to parliamentary democracy. He accused the (“unelected”) judiciary of frustrating government’s transformation agenda. They both sit on the ANC’s national executive committee, its highest decision-making body between national elective conferences.

They may well be testing the waters ahead of the next elective conference in December. But nothing excuses the short-sighted irresponsibility of such utterances, and the ghastly consequences that may ensue. If South Africa is tempted by these options, it will be discarding centuries of struggle aimed at establishing a democratic system in which public power is regulated by law.

Since the origins of communal life, the regulation of public power has challenged humanity. Power has developed from the brute force of the strongest bully in a clan, to the patriarchal dominance of traditional leadership, to the authoritarian dictates of monarchs and autocrats. Divine and secular monopolies of untrammelled authority have been overthrown.

The inexorable trend has been to secure a degree of monitoring and regulation of the exercise of public power.

Of critical significance has been the establishment of popular representation in national governments. A landmark is found in the ‘Glorious Revolution’ of the late 1600s. It established parliamentary dominance over the monarch in Britain. Another is the emphatic elimination of the French aristocracy about a century later.

The French Revolution was accompanied by a “declaration of the rights of man and the citizen”. The American Bill of Rights developed gradually through a series of constitutional amendments from the 1800s.

‘Parliamentary sovereignty’ in Britain was counter-balanced by the rights-infused concept of the rule of law. Decolonisation in Africa and Asia used models of governance based on universal suffrage, and a protected core of inalienable rights.

Perhaps the most far-reaching revolution has been the most recent shift to participatory democracy after the fall of the Soviet empire in the 1990s. This coincided with the last gasps of racist hegemony with the independence of Namibia and the formal freedom of South Africa.

These interconnected events led to a rash of constitution-making throughout central and eastern Europe, and African members of the Commonwealth. There were fundamental elements common to all their constitutions. These were:

This shift was a huge stride towards the responsible and accountable exercise of public power. It allowed the most vulnerable in society to feel a degree of protection. It opened the space for public benefit organisations to use the law to seek social justice. This is particularly vital given that almost all states today have heterogeneous populations. They are made up of diverse ethnic, religious, cultural and other groupings, with unequal bargaining power.

A constitution is only as good as the measure of effective protection it gives to those who differ, even radically, from the policies of the government.

Naturally there were many obstacles in implementing and enforcing such schemes. There have been both partial and almost complete reversions to the unjust patterns of the past. Hungary and Poland are prominent examples in Europe. Populist autocracy has proven very tempting, particularly in those countries formerly part of the Soviet Union, led by Russia.

Paradoxically, the picture in Commonwealth Africa is slightly less depressing. This, despite obvious tensions and challenges in realising the grandiose ideals in the constitutions of southern Africa, which migrated northwards on the continent.

Until now, none of these shortcomings has seriously questioned the fundamental principles of participatory democracy. These principles lie at the heart of such political compacts. There have been instances of party politicians directing their ire at the courts, accusing the judiciary of exceeding its authority. But the constitutional fundamentals have remained generally intact.

Have the intemperate and destructive comments of Sisulu and Zikalala shifted the ground?

In particular, the call for a return to parliamentary sovereignty marks an irrational and dangerous retrogression. Parliamentary sovereignty authorises the majority to make laws unrestrained by legal limitations. This was the system imposed on South Africa by Britain in 1910. Then the electorate represented only about 20% of the male population.

Parliamentary sovereignty in the hands of this minority allowed the rampant development of apartheid policies, laws and executive action. They decimated the rights of black South Africans.

Their damaging effects linger still. The blatant racism diminished the dignity of all South Africans. The scale of its horror prompted President Nelson Mandela’s inaugural comments that: “Never, never, and never again” would the country go down the route of injustice and evil, whether approved by a majority or not.

The constitution was painstakingly negotiated, with hard bargaining over a four-year period. There were no clear winners, but grudging agreement by every delegation on basic rules of engagement. Critically, these included the supremacy of the constitution and the rule of law. They upheld the protection of human dignity, equality, and freedoms, non-racialism, non-sexism, and universal adult suffrage to ensure multi-party democratic governance. These are the founding values of the country’s constitutional democracy. Without this framework, chaotic social and economic destruction would have been the legacy.

The imperative of judicial review

From these values flow the necessity of an entrenched bill of rights and the courts’ authority to review all acts of public power against the constitution. The judiciary has performed this task admirably, often requiring government to tackle socio-economic injustices. In no instance has it inhibited lawful actions which seek to change the wicked patterns of the past. Nor has it strayed onto parliament’s or the executive’s terrain.

The abject failure to achieve meaningful change lies overwhelmingly with a corrupt and ineffective executive, not with the courts.

Sisulu, Zikalala and those who rally to their cause should ask themselves how they would respond if

Without the law interpreted and enforced by the courts, their only resort would be to physical force. Of course, they must be assuming they would be the representatives of the parliamentary majority. Given the decline in ANC support, this is a far-fetched idea. But even if they were in such a powerful position, how would they deal with those who opposed their policies and laws?

Those who peddle such dangerous ideas should be countered at every opportunity by reminders of what was done in the name of a legislative majority under apartheid, and elsewhere.

This article was originally published on The Conversation April 18, 2022