Journalism needs an audience to survive, but isn’t sure how to earn its loyalty 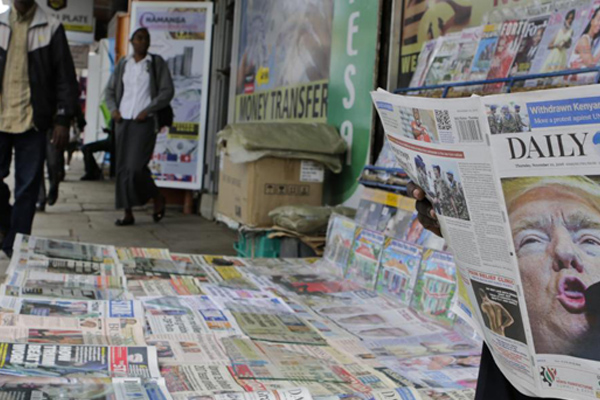 As the news industry struggles to recapture this increasingly distant financial foothold, many within it are certain that the first step forward is to no longer take their audiences for granted. Instead, they have to be more deliberate about earning the audience’s loyalty.

Journalism is in the midst of an existential crisis: the profession has undergone decades of declines in readership, revenue and public trust, with no obvious end in sight.

Many in the industry believe that the best way for newsrooms to recover both revenue and public trust is to improve their relationship with their audiences.

News organizations once boasted huge profit margins, which left many feeling confident that they knew exactly what they needed to do in order to reach the public. As a result, journalists rarely sought feedback from their readers.

However, the advent of the internet brought huge drops in journalism revenue. Between 2000 and 2015, newspaper ad revenue in the U.S. fell, as an Atlantic article describes, “from about $60 billion to about $20 billion, wiping out the gains of the previous 50 years.”

As the news industry struggles to recapture this increasingly distant financial foothold, many within it are certain that the first step forward is to no longer take their audiences for granted. Instead, they have to be more deliberate about earning the audience’s loyalty.

Yet this newfound consensus within the industry has resulted in a lot of uncertainty: How, exactly, should journalists do this?

Newsroom strategies for better understanding and connecting with their readers, viewers and listeners differ from one organization to the next. These differences matter because journalism’s future, and the audience’s role in it, will depend in no small part on which of these strategies succeed.

Some rely on digital metrics to determine what their readers like and dislike, and use that information to give them more of the former and less of the latter. The news company BuzzFeed, for example, is legendary for its use of data to predict which of its stories will “go viral.”

What accounts for journalism’s varying approaches to the news audience?

I research the relationship between journalism and the public. In two recently published studies, my collaborators and I concluded that how journalists perceive their audiences powerfully affects what they do to reach them.

The first study, published in the academic journal Journalism Studies, drew on interview and observational data collected from a large daily newspaper.

My co-author Edson C. Tandoc Jr. and I examined how journalists use audience measurement data to understand who their work reaches.

We found that, when presented with a variety of sophisticated tools available for analysing reader behaviour, the newsroom’s staff tended to favour audience size measures above all others. They wanted to know which story got the most readers.

The journalists we spoke to explained their focus on audience size metrics in two ways.

The first was economic: Media companies depend on advertising and subscription revenue. The larger the audience, the more advertisers will pay to reach it and the more financially secure the organization.

The second related to the watchdog mission of the newspaper: The journalists argued that their stories can’t make an impact on their community if no one reads them.

The reliance on these metrics made clear an important assumption these journalists held about the nature of their audience. When they used metrics to observe that readers tended to click on “soft” news stories (e.g., lifestyle, sports, dining) and not “hard” news stories (e.g., city hall), many of the journalists we interviewed concluded that a majority of the public is simply not interested in what they deemed “important” public affairs news.

As one of the paper’s senior editors explained: The mission journalism—the watchdog journalism, the covering city events, making sure that people aren’t getting screwed over, etc. … There’re not enough people reading those stories … to keep us where we are now. … The money does not exist there.

In short, the increasing emphasis on understanding and measuring the news audience revealed that many within this newsroom perceive reaching a large audience and publishing public service journalism as separate pursuits.

While we can’t generalize from our study of this one organization, a number of other academic studies have similarly observed that journalists associate what people click on with what they like. Since people tend to click more soft news than hard, this association has led some journalism scholars to worry: “The market requires giving the public what it wants; democracy requires giving the public what it needs.”

From measurement to engagement

Not everyone in journalism shares this assumption. A growing group of news industry innovators believes a majority of the public is genuinely interested in reading about civic issues, despite what some of the data appear to say.

This other group believes it’s not a lack of interest that keeps citizens away from those stories, but a disdain for how those stories are being reported.

They argue the public feels alienated by, and distrustful of, journalism that rarely solicits their perspectives and, consequently, fails to accurately reflect their lives. To fix this, journalists need to more actively “engage” with the public. As the journalism researchers Thomas R. Schmidt and Regina Lawrence write, “Many increasingly see engaging with audiences and communities as a key strategy to maintain relevance and achieve sustainability.”

The motivations and pursuit of engaged journalism came up in another study recently published in the academic journal Journalism Practice, which I co-authored with Valerie Belair-Gagnon and Seth C. Lewis.

We examined how journalists at two different public media news organizations attempt to engage with their audiences. This research also relied on interview and observational data.

We found that these journalists felt strongly about creating opportunities for more meaningful engagement with the public than has traditionally been the case, especially with communities the journalists felt had been “left out.”

These opportunities included online initiatives like soliciting questions from listeners about topics they are interested in, as well as offline events like “listening sessions” designed to build trust and strengthen ties with minority residents whom these journalists cover in their reporting – but do not necessarily reach with their reporting.

For example, when the 2010 census revealed that Wisconsin led the nation in black male incarceration, this newsroom hosted a listening session with black men who had been released from prison.

The journalists we interviewed explained that the session was led by a university professor who had experience guiding a listening session and creating a safe place for people to share their stories.

“We didn’t record it or anything. We used it more as a way to try to understand the issues that we’re overlooking,” one of the editors who organized the session said. “Out of that grew this sense that we weren’t really giving these men a place … to tell their own stories” in the newsroom’s reporting.

By pursuing these initiatives, these journalists sought to ensure their stories did not solely originate from what they believed to be the most important issues facing their readers.

Instead, they wanted to create opportunities to hear from their readers—specifically those who they infrequently hear from—about what they believed needed to be covered.

These two studies show that journalism’s growing focus on the news audience has not been accompanied by a growing consensus about who these audiences comprise and what they want from news.

Even when journalists agree that the audience consumes less public affairs news than it does other kinds, they draw different conclusions about why this is the case. Some blame the audience, others blame the journalists.

One thing that these studies make clear: As the news industry struggles to survive, many within it increasingly believe their best path forward lies with an improved relationship with the public.

However, the steps journalists take to do the work of improving that relationship remains an open question.

This article was originally published on The Conversation on February 7, 2019

PrevPreviousFrom the editor: It’s time to step up, free press needs allies
NextData remains an expensive luxury in Africa but free internet may not come freeNext