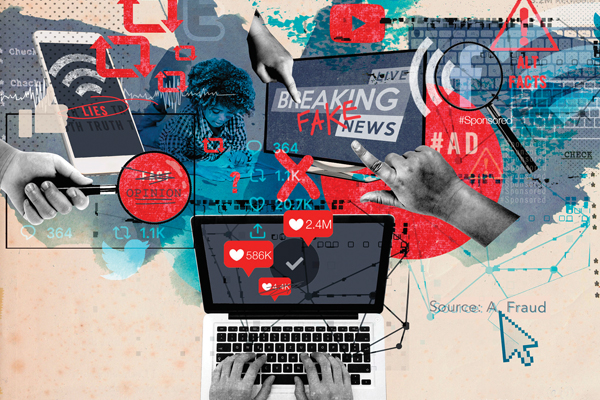 In 2017 elections, the mudslinging migrated online and become much more nuanced and sophisticated.

The last Kenyan elections firmly demonstrated the incursion and perhaps even gradual institutionalisation of fake news as an actor in modern politics, particularly during elections. Although the term fake news is now so liberally used to the extent it eludes precise definition, many agree it’s the deliberate dissemination of false information expressly intended to misinform.

The presidential election, which pitted the incumbent Uhuru Kenyatta against his then political nemesis (and now ally) opposition leader Raila Odinga, was fiercely fought on many fronts. One of these fronts, arguably the most significant, was the unprecedented investment in political messaging.

Kenyatta’s Jubilee Party and Odinga’s National Super Alliance (NASA) invested heavily in media and public relations consultants, communication experts and political advertising. The Jubilee Party even enlisted the services of Cambridge Analytica, the data mining and analysis company credited with playing an influential role in the election of former US President Donald Trump. The company also had a hand in the UK’s Brexit campaign.

Added to this heady mix was clandestine messaging through fake news on social media sites such as Twitter, Facebook, Instagram and WhatsApp. Numerous fake news stories were widely circulated on social media as unsubstantiated allegations were posted against both parties, some even through paid adverts on Google.

This was a step up from previous elections where politicians would pay backstreet newspaper publishers to tarnish the names of their opponents. Kenya has always had publishers for hire, a particularly thriving industry at election time. These publishers quite often have no known addresses, are defined by their impermanence and therefore impossible to sue even when one is legitimately aggrieved by their publications.

In 2017, the mudslinging migrated online and become much more nuanced and sophisticated. Stories that featured fake opinion polls and others that directly attacked the characters of both Kenyatta and Odinga were widely circulated online and in print. Some of these were slickly produced videos that were passed off as originating from CNN and the BBC.

In one fake CNN video Kenyatta’s popularity rating was shown to be well ahead of Odinga’s. Another fake video, this time purportedly an outtake from the BBC’s Focus on Africa programme, also featured an opinion poll showing Kenyatta beating Odinga.

And fake newspapers bearing the plagiarised mastheads of widely circulating dailies including the Daily Nation and The Star were sold to unsuspecting readers.

This proliferation of fake news in Kenya can be explained on two grounds. The first relates to the history of the country’s media, and the second to the increasing importance of online platforms in shaping the African news agenda.

The Kenyan media has become a prisoner of its history. It remains shackled to the consequences of its role in the country’s 2007 disputed presidential elections. A section of the press was accused of actively promoting the violence that engulfed the country in the aftermath of the polls. At least 1,000 people died and more than 500,000 thousand were displaced.

This legacy has turned the media into a bystander in the political process, especially at election time. In 2013 it hardly raised any objections to electoral malpractices that led to the disputed presidential election. Instead, media houses promoted “peace” to pre-empt a repeat of the 2007-2008 post-election violence.

It was a decision that was supported financially by a number of local and international agencies who spent months training the local press in “peace journalism”. This peace narrative has now become normalised in election coverage in the country. The consequence has been the creation of an information vacuum which has now been filled by fake news.

The circulation of fake news also seems to have benefited from the changing profile of the Kenyan voter. Nearly half of about 20 million registered voters in Kenya are aged between 18 and 35. A significant number source their news from social media where fake news circulates the most.

According to a recent consumer survey only 28% of young Kenyans read newspapers regularly. Social media is slowly but surely becoming their platform of choice for news.

And the audience for fake news is growing given that two out of three young Kenyans now either own a mobile device or have access to one, and Internet connectivity costs go down annually.

This election revealed the fact that fake news has not only become commonplace, it’s become mainstream and is evolving into a distinct news genre.

Fake news thrives on the modern news consumer’s insatiable appetite for speedy information. We are living in a news ecosystem where urgency trumps the core values of journalism such as accuracy, fact checking and objectivity.

Traditional news media, with brands built on the back of their ability to fact check or investigate stories before publication, are struggling to do so when they are simultaneously expected to publish with speed. While gate keeping is key to ensure that news outlets remain trustworthy, the speed at which audiences now expect information has seen media houses haemorrhage audiences.

That lag in providing speedy information has created a vacuum which fake news producers are exploiting. They don’t have brands or reputations to protect. Fake news is positively sustained by an online economy which prioritises sensationalism over quality. Sensational ‘news’ very quickly goes viral and this is its most effective weapon.

Fake news is slowly intruding on virtually every aspect of life. We must first understand its appeal and then make every effort to counter it. This is especially the case because it is now a genre sustained by a much larger social, economic and political infrastructure that the news media alone is incapable of dealing with.

This article was originally published on The Conversation on August 29, 2021.

PrevPreviousJacob Zuma: When did erstwhile South African revolutionary lose his way?
NextHow African countries can reform education to get ahead after pandemic school closuresNext