Football and politics: when Algeria won the 2019 Africa Cup of Nations 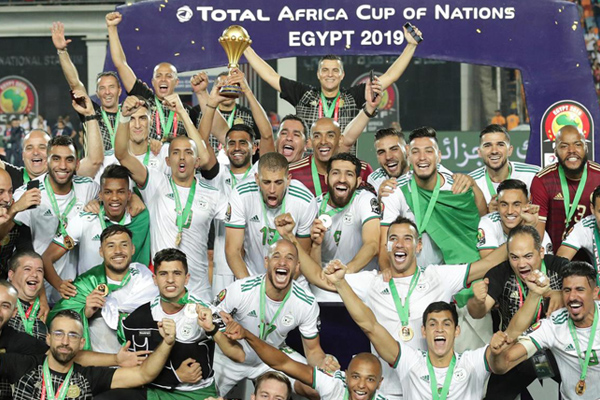 Following on the heels of Bouteflika’s resignation amid massive protests and the nomination of a caretaker president, the 2019 Africa Cup of Nations came in the right time.

With African football on hold and the Africa Cup of Nations (Afcon) rescheduled because of the Covid-19 pandemic, there’s plenty of nostalgia to go around. But memories of the Algeria’s biggest football wins can offer more than just nostalgia. The 2019 Afcon win in Egypt also offers insights into how governments co-opt the game.

Algeria’s victory against West Germany in the 1982 FIFA World Cup, still in Algeria’s post-independence, was an iconic moment. As was their first Afcon win in 1990 in Algiers.

A decade later the country entered one of its darkest times since independence. Under Abdelaziz Bouteflika—who would serve as president for 20 years from 1999. Political violence caused the deaths of thousands and deeply affected Algerian society.

The 2019 Afcon trophy would be lifted 29 years after the first. This game, in Egypt, is especially worth recalling because of the political circumstances surrounding it. All the elements of a Greek tragedy were in place that day.

On Friday 22 February 2019, after a campaign on social media following the announcement by the ruling National Liberation Front that an ailing Bouteflika would stand for a fifth term, hundreds of thousands of demonstrators took to the street to express their discontent. The prospect of enduring another five years of Bouteflikism was too dire.

Since then, every Tuesday for students, and every Friday after the prayer, Algerians of all ages and regions have returned to the streets. The peaceful protesters want real change, including the end of the army-backed establishment that has ruled since independence in 1962. On March 8, Women’s Day, the number of demonstrators, men and women of different age and class in the hirak (the Arabic word for “movement”), reached an unprecedented level.

The army, led by General Major Gaïd Salah, Minister of Defence, pushed for Bouteflika’s resignation and the postponement of the election. This led to the disintegration of Bouteflika’s high profile entourage, called the essaba (gang), who accumulated colossal fortunes in exchange for financially backing political manoeuvres to maintain Bouteflika’s regime.

This money was also used to co-opt sport, football in particular. Each election, photos of Bouteflika would adorn football stadia and be displayed at the opening of matches. It was not unusual for club bosses and former players to be seen at political rallies for Bouteflika, who famously claimed during a 2009 speech that Algeria “has the means to organise two football World Cups”.

One example of this interplay between football, business and politics is a long-time backer of Bouteflika, construction magnate Ali Haddad, who purchased the football club USM Alger in 2010 and became its president. Interestingly, the club’s fans continued with their chanting attacks on the symbols of Bouteflika’s privileged class or “les nouveaux riches” who controlled the networks of politics, media and business in Algeria.

Football fans have been active in the hirak from the beginning, and their politicised football chants have been embraced as an expression of popular resentment with political systems and socio-economic conditions.

Following on the heels of Bouteflika’s resignation amid massive protests and the nomination of a caretaker president, the 2019 Africa Cup of Nations came in the right time. It was for the new decision makers, led by General Salah, an opportunity to reconcile with the population and rebrand the new ruling elite as guarantors of stability and the fight against corruption.

For the Algerian national football team, after years of instability and management changes, it was another opportunity to reconcile with supporters at home and among the large Algerian diaspora in Europe and in North America.

On the Afcon field

In 2014, Algeria experienced its first time in a knockout round at the FIFA World Cup. But when Djamel Belmadi was appointed as new coach in August 2018, the team had plunged into a crisis of confidence. Results were absent and critics were present and acerbic. So, when Belmadi announced that Algeria would go to Egypt to lift the cup, few took him seriously.

The tournament was being played in Egypt, one of the favourites for the title. For Algeria, Egypt was a rather hostile sporting environment. The two countries had been football foes for decades – and at political loggerheads over the Libyan conflict—and the animosity was tangible. The hostility continued especially after Egypt failed to reach the second qualifying round. Yet opposition to Algeria’s opponents in the final, Senegal, was also great.

With the logistic support of the army, the new Algerian leadership organised the airlifting of Algerian supporters from different regions of the country into Egypt, even offering them free tickets once in Cairo.

In the stadium Algerian fans cheered a team that was “reborn alongside the hirak”.

Back on the streets

And so, the celebrations of Algeria’s second Afcon cup happened in a unique context. They extended to the Algerian community around the world, in Europe, Canada and the US, and in France in particular.

And, as always, raising the Algerian flag in French cities fuelled the debate on French identity and the question of alliance with Algeria’s former colonisers.

Algeria’s captain Ryad Mahrez, after scoring a winning free kick against Nigeria to qualify for the final, had tweeted “the free kick was for you, we are together” with Algerian and French flag emojis. There were a number of French-Algerian dual nationals on the team.

The tweet was in response to a far-right tweet “to avoid the tide of Algerian flags, to preserve our national holiday … Trust the 11 Nigerian players.”

You could also read how around 2,500 police officers had been mobilised in Paris to “prevent street clashes”. The situation led French-Algerian coach Belmadi to urge Algerian supporters in France to celebrate in an “orderly” way—a reference to the peaceful and orderly hirak protests.

A number of supporters were nonetheless arrested after clashes with police.

Looking back, the 2019 Afcon win underscores how the Algerian regime has long understood how to mobilise the national football team victories for its own agenda. But the regime is also now very aware of the liberty football can bring.

For years young Algerians have understood that stadiums are the ideal venue to freely voice their socio-political and economic discontent. These football chants and slogans reached their zenith when they were eventually repeated by thousands every Friday during hirak marches.

Abdelkader Abderrahmane contributed to this article. He is a geopolitical researcher and international consultant on African peace and security issues.

This article was originally published on The Conversation on August 3, 2020.