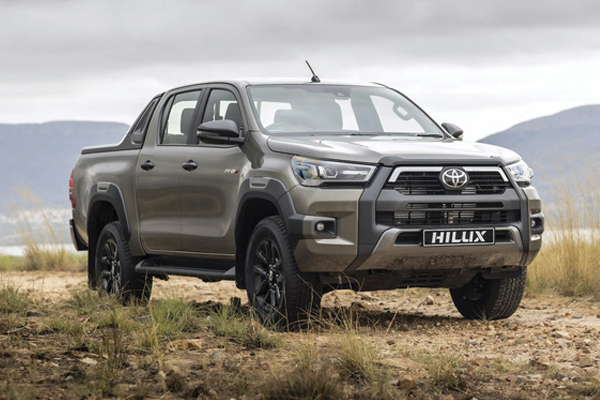 Since its initial launch in 1968, the legendary Toyota Hilux has proved its invincibility time and again, having conquered the North Pole, Icelandic volcanoes and the Antarctic continent, and also achieving podium finishes in the Dakar Rally in 2019.

model has sold more than 13 million units across the world and is regarded by many as the world’s most favourite pick-up. 2021 brings a host of updates to the 8th generation Hilux, which has been on sale since 2015.

This is revamped with a large trapezoidal grille that dominates the front design and incorporates more pronounced horizontal elements to deliver a wider, more planted look. The newly designed headlights are smaller for a meaner appearance and feature LED units with bright chrome surround. At the side is a more muscular impression created by integrated wheel-arch flares and a dynamic feature line running from front to rear. The side steps are neatly integrated to the side and feature chrome finish on high spec variants.

Different wheel sizes ranging from 16-18 inches are available depending on the selected model grade. The cabin silhouette flows to an angled C-pillar. At the rear are the redesigned fenders that extend rearwards while a unified line connects the cabin and redesigned rear bumper with an integrated step. Distinctive new LED taillights to enhance night-time visibility and reduce power consumption.

Is tweaked with a pleathora list of changes consisting, among others, of a new 8-inch centre infotainment screen. Gone is the capacitive-touch interface and in its place are physical knobs for easy operation. Also included with the new system are features such as Apple CarPlay, Android Auto, voice recognition and a powerful JBL 6-speaker system.

Behind the steering wheel are new speed and rev counters, which feature a cleaner and more premium appearance with white numbers and pointers on a grey-metallic background. The twin dials sit on either side of a high-precision colour 4.2-inch multi-information display (MID) that includes a digital speed readout. In addition to conveying safety settings, odometer and trip displays and other driving support information, the MID now offers even greater driver comfort and convenience features, including the front-wheel angle.

The driver seat features electric power adjustment, on high spec versions of the Hilux, while the steering has reach adjustment for one to find an ideal driving position. The split-level glove box features a lockable lower compartment, whilst the upper compartment is connected to the HVAC system and may be used as a cool box for the storage of two 500 ml bottles.

Beneath its padded armrest lid is an optional AC 220V power outlet. The driver and passenger dashboard-mounted cup holders are positioned in front of the side air vents for drinks cooling. The transmission tunnel incorporates a further large cup holder and a storage tray, adjacent to which are two DC 12V accessory sockets and both AUX and USB ports for the connection of smartphones and portable media devices.

A 60:40 split tip-up rear seat is available to enhance Double Cab flexibility. Its lightweight structure means less effort is required to fold the seats, whilst its centre armrest is wide enough to be used by both occupants simultaneously.

Its improved through a number of substantive changes to the 2.8-litre and 2.4-litre four-cylinder power units for 2021. The bigger unit, found on high spec Hilux variants, has received a power bump from 177hp to 201 hp (150 KW) while torque is up by 100 Nm to 500 Nm (with the six-speed automatic or 420 Nm with the six-speed manual). The updates result in stronger overtaking on the highway with maximum torque now available across a wider range of 1600-2800rpm (auto) and 1400-3400rpm (manual).

The Hilux maintains its low-rpm torque and driveability in the city and off-road conditions. The smaller 2.4-litre unit power output remains unchanged at 150 hp (111 kW) and 400 Nm of torque. However, Toyota has improved the engine’s overall efficiency.

The Hilux maintains its renowned off-road performance, load-carrying capability, stability and body control. The retuning of spring rates, shock absorbers and suspension bushes as well as revised cabin mounts deliver a more agile handling response and improving ride comfort, particularly when unladen on country roads and over speed humps. The Hilux 310 mm of ground clearance, 29- and 26-degrees approach and departure angles of respectively and 700 mm of wade depth.

The 4×4 version of the Hilux’s off-road credentials has been further enhanced by the addition of a new electronic function (that can be activated in 2WD mode) replicating the effect of a mechanical limited-slip differential for improved traction on low grip surfaces in 2-wheel drive mode (available on 4WD models only). The Downhill Assist Control is standard on all 4WD Hilux models.

Toyota’s best-selling pick-up soldiers on in 2021 with a host of much-needed updates, which offer a myriad of styling cues that enhance the pick-up’s modern design, emphasise its tough underpinnings and keep the vehicle truly appealing. The 2021 Hilux is available from Toyota Kenya showrooms located in Westlands and along Uhuru Highway and Mombasa Road in Nairobi. All Toyota models are serviced form a wide branch and dealer network spread across Kenya.