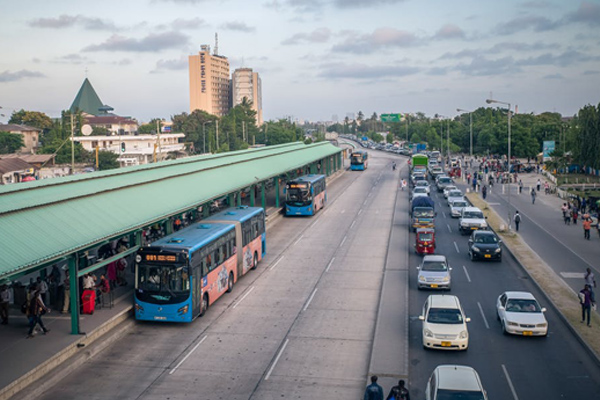 Split into six phases, DART has triggered a major overhaul of the city’s road infrastructure—by its completion, 137km of new roads will have been built.

Bus rapid transit systems (BRT) have become the fashionable solution to chronic traffic congestion and low quality public transport—endemic problems for many cities in developing countries. BRTs typically operate using dedicated bus lanes, while passengers pay their fares before boarding. The number of BRTs is growing rapidly across the world: from 40 in 2007 to 170 in 2019—and there are many more in the pipeline.

BRT has several prominent advocates around the world, including the World Bank and NGOs such as the Institute for Transport and Development Policy (ITDP) and Embarq. They claim that the system combines the flexibility of bus transit with the speed, reliability and capacity of rail systems, at a fraction of the cost.

It’s also regularly said that BRT fares can match those of pre-existing minibus operators, and that BRT buses cause less pollution. Such arguments fuel claims that BRT systems represent a “win-win” solution to public transport woes, benefiting the economy, the environment and the poor all at once. But there’s evidence to show that BRT proponents promise more than they can deliver, especially for society’s most vulnerable.

Dar es Salaam, in Tanzania, is one of the fastest growing cities in Africa. It’s home to an estimated 6m people, and to DART—the most ambitious BRT system in Africa. Split into six phases, DART has triggered a major overhaul of the city’s road infrastructure—by its completion, 137km of new roads will have been built. Since the launch of phase one in 2016, travel times have been greatly reduced, leading Chris Kost, Africa director of the ITDP, to claim: Bus rapid transit has been transformational for Dar es Salaam. For millions of people in African cities, this is their best hope of ever being connected.

But while some groups do indeed benefit, this rosy outlook obscures the fact that some people are left worse off. Take the issue of fares, for example. Though DART officials pledged that BRT fares would be comparable to those of the daladalas – the minibuses which provided the cheapest form of public transport in Dar es Salaam before BRT – today, DART fares cost on average 55% more. This fare inflation is common to BRTs elsewhere in the world, and was even the cause of violent protests in Bogotá, in Colombia.

Despite investments of US$150m for the first phase of BRT, the poor are still stuck in traffic on cheaper buses every day. By contrast, those who are wealthy enough to afford the higher fare have the option of cutting travelling time by two hours a day. Roughly 70% of Tanzanians live on less than 4,400 Tanzanian shillings a day, (that’s less than US$2). Yet a two-way commute along the main branch of the BRT would cost 1,300 shillings – that’s a staggering 30% of poor people’s daily income being spent on transport. By comparison, the same commute by daladala would have cost 800 shillings.

What’s more, the lack of jobs is a major problem in Dar es Salaam, as in many other metropolises in developing countries. Since BRT buses can carry more passengers than minibuses, about ten daladalas will be displaced by each BRT bus. This will have devastating consequences for the 20,000 to 30,000 people employed in public transport. There are currently no plans to address the fate of these workers.

BRT advocates commonly praise it as a financially self-sufficient bus transport system. But BRT in Dar es Salaam, as elsewhere in the world, is not sustainable without public subsidies – even with its current high fares. Whether or not the Tanzanian government is willing to subsidise the system remains to be seen. But in a country with very limited public resources, doing so would divert funding from other vital development needs.

A fix for finance

BRT systems are, by and large, financed through World Bank loans, which need to be repaid. The nature of these loans opens up public transport in African cities to international finance, and to the private companies which operate the systems under lucrative public-private partnerships contracts. The benefits of these arrangements to governments in developing countries are questionable.

And NGOs which are active in BRT promotion, such as ITDP, depend on funding streams related to BRT implementation, such as funds for producing BRT planning guides, carrying out BRT feasibility and impact studies and facilitating access to BRT financing for urban authorities in developing countries.

If such organisations are evangelical about the benefits of BRT, and silent about their shortcomings, it could be because it’s in their financial interests to see new systems implemented around the world. But public transport should be designed with the interests of cities’ most vulnerable residents at heart; especially those who cannot afford higher fares, or stand to lose their livelihoods when current systems are reformed.

This article was originally published on The Conversation on January 22, 2019.

PrevPreviousAnxiety in Johannesburg: New views on a global south city
NextFootball and politics: when Algeria won the 2019 Africa Cup of NationsNext