COP26: How the world’s militaries hide their huge carbon emissions 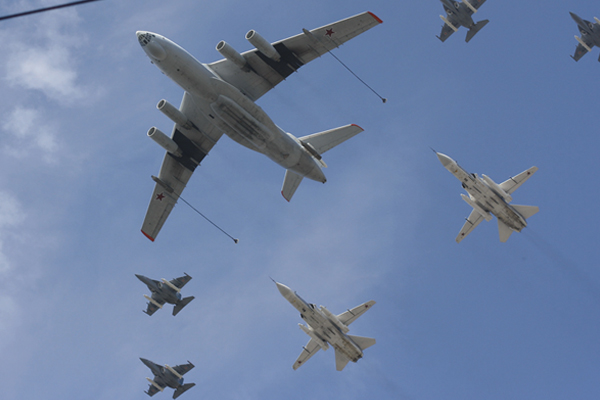 Despite the outsized role of militaries, we know surprisingly little about their emissions. This is remarkable given their reach and fossil fuel dependency.

Climate change leadership requires more than stirring speeches. It means facing up to hard truths. One truth that governments around the world are struggling with is the immense contribution their militaries are making to the climate crisis.

For example, the US Department of Defence is the largest institutional consumer of fossil fuels in the world – and the largest institutional emitter. Two of us worked on a 2019 study which showed that if the US military were a country, its fuel usage alone would make it the 47th largest emitter of greenhouse gases in the world, sitting between Peru and Portugal. In other words, the US military is a more consequential climate actor than many of the industrialised countries gathered at the COP26 summit in Glasgow.

Despite the outsized role of militaries, we know surprisingly little about their emissions. This is remarkable given their reach and fossil fuel dependency. Some scientists estimate that, together, militaries and their supporting industries might account for up to 5 per cent of global emissions: more than civilian aviation and shipping combined.

One reason we know so little is due to militaries being one of the last highly polluting industries whose emissions do not need to be reported to the United Nations. The US can take the credit for that. In 1997, its negotiating team won a blanket military exemption under the Kyoto climate accord. Speaking in the Senate the following year, the now special presidential envoy for climate, John Kerry, hailed it as “a terrific job”.

At present, 46 countries and the European Union are obliged to submit yearly reports on their national emissions under the United Nations Framework Convention on Climate Change (UNFCCC). The 2015 Paris Agreement removed Kyoto’s military exemption but left military emissions reporting voluntary.

Our research into this military emissions gap has for the first-time shed light on the dire state of global military emissions reporting. Under-reporting is the norm, as is data that is inaccessible, or aggregated with non-military sources. For example, Canada reports its emissions under multiple IPCC categories, reporting military flights under general transport, and energy for bases under commercial/institutional emissions.

Military emissions reporting by the many countries that do not have to report annually to the UNFCCC is even worse. This includes countries with massive military budgets, such as China, India, Saudi Arabia and Israel.

That “terrific job” in 1997 has unfortunately cast a long shadow. In 2020, global military expenditure reached nearly US$2 trillion (£1.5 trillion), and the international community remains largely oblivious to the carbon cost of these dollars, irrespective of where they are spent.

This vast military imprint on the Earth’s atmosphere is not on the formal agenda of COP26. However, hopes are that it will be for COP27 next year, as countries begin to wake up to their huge military carbon bootprint.

In June, the military alliance NATO announced that it would set concrete targets for it “to contribute to the goal of Net Zero emissions by 2050”. Meanwhile, countries like Switzerland and the UK, which have passed domestic legislation setting net zero targets, are finally having to face up to the uncomfortable truth that their defence ministries are the largest institutional emitters within government.

While military emissions are gaining attention, the culture of military environmental exceptionalism that birthed it will continue to drive the long war that militaries have been quietly waging on the climate. For all their spending power and political influence, militaries are behind the curve on sustainability. This was clear from NATO’s additional 2021 pledge to develop a carbon counting methodology for its members to use – an area where militaries are lagging behind other major sectors.

Which emissions should militaries count? Should such accounting exercises focus exclusively on fuel use and energy consumption? Or should the operation of the massive, global supply chains – like those run by the US government’s Defence Logistics Agency – also be included? Emissions from supply chains can be 5.5 times higher than an organisation’s own operational emissions.

And what about overseas operations, whether overt or covert, or the wider climatic costs of war and peace, such as landscape degradation, deforestation or rebuilding?

Western governments, including institutions like NATO, are busy positioning themselves as leaders on the security implications of the climate crisis. Their credibility on climate security, and on climate action more broadly, will be contingent on their willingness to first face up to some difficult truths about their own contribution to climate change. It will also require far more openness and transparency. Both will be vital for delivering real change, rather than more weapons-grade greenwash.

There should be no illusions as to the scale of the challenge governments face. War is a dirty business. Militaries are institutionally complex, and procurement cycles last decades, which can “lock in” emissions. Things will not change overnight, but what they do not count, we can’t see. And what we cannot see, they will not cut.

This story is part of The Conversation’s coverage on COP26, the Glasgow climate conference, by experts from around the world. Amid a rising tide of climate news and stories, The Conversation is here to clear the air and make sure you get information you can trust.

This article was originally published on The Conversation on November 9, 2021